Starting off with the biggest race of the day for our home audience, if the US women's eight looked a bit vulnerable in the first 1500m in Aiguebelette, and then perhaps again in the heats here in Amsterdam based on the splits, they had surely shored things up by the time their 1:48pm local time final came. The crew's main competition was going to be the Canadian crew, which had led them for most of the race in Aiguebelette, and as reported earlier in the week, posted the exact same time as the US in the heats.

Come the final, the two crews ran even for about 400 meters, and then the US stepped on the gas, and it was all but over. For the second and third 500s, the US extended continuously – for a spell taking almost seat as every buoy went by (the buoys are spaced 10 meters apart).

After the race, 6-seat Caroline Lind talked about the adjustments the crew made during the week.

We had a headwind in the first race, and we really had to work our rhythm in the right direction (for the tailwind) because we knew what was coming today," she said. "We just listened to Tom (Terhaar) and we stuck together. The nine of us together, it is a lot stronger than any individual, and just by moving together, and listening to Tom’s advice, that’s how we got better this week."

On getting ready for the tailwind conditions, and the fast times and extra boat speed that come with it, Lind said the crew did some specific work to make the change. "We did a lot of quickness stuff with our hands to really help with the lightness and the tailwind. And boy I gotta say, there’s nothing like having two Tigers in the stern. Having Heidi lead us this year is amazing, she really added a lot of energy to the boat.

Just after getting out of the boat, Lind had mentioned something Terhaar had said before the race.

"It was lactate up to my eyeballs," she said. "Tom said it was going to happen, and right now my head is pounding and I’m feeling it all over my body. Maybe that’s what happens when you get more mature."

I asked if more mature is better.

Stroke Heidi Robbins related what she was thinking on the starting line.

I asked Meghan Musnicki what was the same, different, or unique about this year's crew compared to the previous eights in which she has rowed.

"Every year it’s different because the lineup is slightly different, or the people are different, the personalities are different," she said. "Your potential is also different, so the goal is to to finally tap into what we knew the nine of us could do together. I think we really did it today. I think we executed what we wanted to do from the first stroke and never let up, and I really do think that this was the best race we’ve done in this particular group of nine."

Finally, I mentioned to Musnicki my recollection of the bittersweet moment that comes every year when, just as your crew really comes together, and the rows are getting really good, the last race comes, you take the riggers off the boat, and it's done.

It's perfect, and then it's done – every rower knows the feeling, and even enjoys it a little bit. But the World Champion women's eight knows it right now. 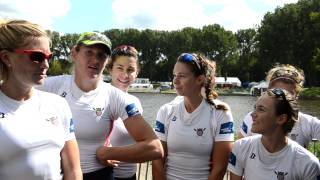