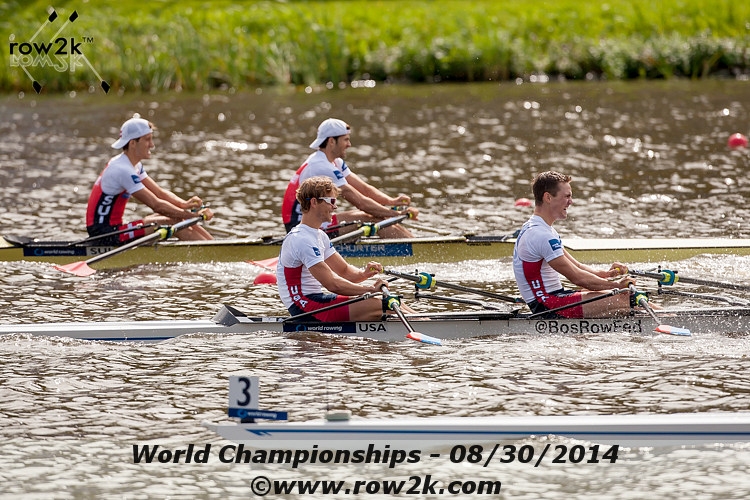 The light men's double is one of the toughest and deepest events in the World Championships. After the men's and women's single, it is the most heavily subscribed event, and the quarter and semifinals for the event almost routinely produce tight races, hairy sprints, and photo finishes. For example, today's A final went as follows:

Even the B final had four crews within closed water, all under 6:20 - and the race was declared a dead heat at first before the GB crew was eventually declared the winner. The US double of Austin Meyer and Josh Konieczny were in that mix, finishing 10th overall – after having come out on the good side of a photo finish in the quarterfinals, and the bad side of another in the semis.

Meyer was on the team last year, but this is Konieczny's first US team – a trial by fire for sure. I talked to the duo after they came off the water from the B final.

The racing summer now behind you, take us through this race, in which I think you went 6:19, pretty quick, and then if you have any reflections on this summer.
Konieczny: Thinking on this race, it was tactically well-executed. We got off to a quick start, and we didn’t really let Denmark get away as we had in the quarter final. Coming through the 750 we just kind of raised our game and kept it technical. I think the highlight of the race for me was running through Denmark in the last 300 meters or so.

I think as a reflection on this entire World Championship, it is just how much of a different game it is than the World Cup, or anything we have ever done before. We are just going to glean as much information as we can, and take it all the way through to next year.

Meyer: It is a very huge step up and we still have a big step to go, especially yesterday and having a great race today. I can’t really walk away from that and be too disappointed. There are a lot of things we can improve upon easily within our preparation, and I think over the year it can make a huge difference.

Any thoughts on racing in this event, which is sometimes amazingly fast and really deep. Is it what you expected coming in? More than you expected?
Konieczny: I think it is probably a little bit more. I was talking to Austin the other day and it seems like there are all the traditional scullers in the field, and then we also have people from the (Olympic Champion South African) London four; their top two guys are now in the double. It is kind of heartbreaking to be in a field where you can come out three-tenths on the wrong side, but at the same time it is exciting. If it was boring I probably wouldn’t be doing it.

Meyer: If we make two seconds improvement, it won't come down to those tenths, and those add up after four races so. You look at the French and the Norwegians, and they are just doing amazing well in this regatta and it’s not that far out of reach.

That’s our goal is to be up there, not to just be sneaking in. So we are not so much devastated to not make the final, but eager to keep going.