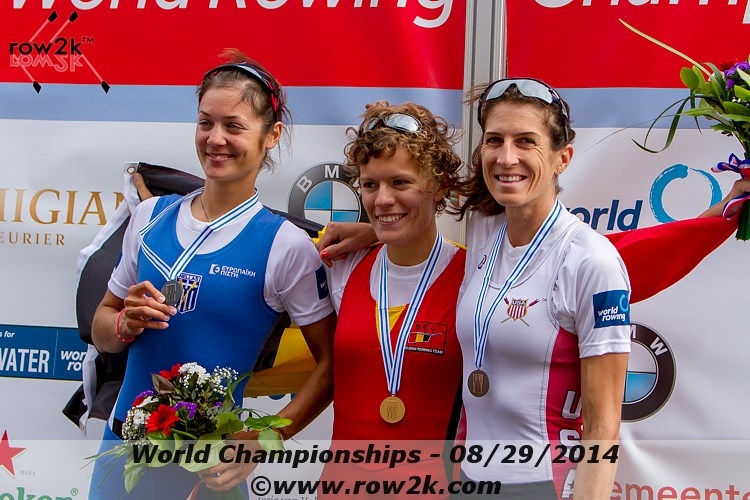 Shortly before Kate Bertko got to Amsterdam a couple weeks ago, she was using a cane to be able to walk. When she leaves, she will be wearing a medal.

In early July, eight weeks and a couple days before winning a bronze medal in the World Championships this afternoon, US women's single sculler Kate Bertko was texting friends from a hospital bed where she had undergone emergency abdominal surgery to fix an issue with twisted intestines.

This wasn't your standard arthroscopic surgery, involving a small incision and smart instruments; this was a carve-open-your-stomach ordeal. The photo at right is worth a thousand words, though we should probably issue a trigger warning before you click.

She had intended to contest the women's double at trials with partner Kristin Hedstrom, but that was obviously out of the question for someone who was still in the hospital a few days before the trials.

It had already been a wild summer for Bertko and Hedstrom, who were world silver medalists in the double last year in Chungju, Korea. The duo had lost the National Selection Regatta to this year's double of Michelle Sechser and Devery Karz, who then got the chance to qualify for the event by placing in the top four at a World Cup. They headed for the second World Cup, in Aiguebelette, France to try to lock up their spot.

Then Bertko ended up in the hospital. After major surgery, Bertko went into rehab that involved merely trying to stand up straight at first, as the stitches and muscle damage pulled her down into a bent position.

Next it was time to walk; Bertko started walking with cane, and a Map My Walk app that clocked her doing 45 minute miles at first; "that was slow," she admits now.

Three and a half weeks ago today, Bertko got back in the single. A week before the team left for Amsterdam, it was decided she would try to race. Yesterday, she won her semi rowing away, and tweeted the following:

8 wks ago my guts were having an out-of-body experience. Excited for the LW1X final tomorrow at #WRChamps Grateful for the amazing support!

And in what by any measure is an incredibly improbable happenstance, today we talked about her disappointment at not winning a gold medal after she took the 2014 World bronze.

Forget what was going on three weeks ago; come race day, Bertko was thinking about winning.

"I race to win, so it’s a disappointment in its own way," she said. "But sitting on the starting line, I realized I’m just excited to be here. It’s bittersweet but the opportunity to race is a gift.

"The race was tough, it was very technical," she continued. "I think I could have rowed a lot better. I was trying to push the pace for myself, but I don’t have a sense of what my race pace is at this moment, so I was just trying things out. I made some mistakes but also my competition is fast and I got outraced."

But Bertko is not oblivious to what she just went through, not at all. The racing is one thing, but the process of getting there took some extra help.

And she got some help from Mark Nowak, who many elite rowers know well – for having bailed them out of serious jams when injured.

"I have to thank my rowing club, USRowing, and Mark Nowak, who basically saved me here. When I got here I was much worse than I am right now even after all the racing. So he was kind of a miracle worker."

Watching her winning her semi the other day, no one alive would have thought Bertko was worried about standing up straight and breathing at the beginning of August. As late as this week, before the heats, Bertko had a visible limp when carrying her oars or boat around the boatyard for the heats. Climbing up on the medal stand, it seemed to be gone – or at least it was the last thing her teammates who were yelling "Bertko is the BOSS!!" from the grandstand, or really anyone near the medal podium cared to notice or think about, least of all Bertko herself.
back to top
World Championships Features