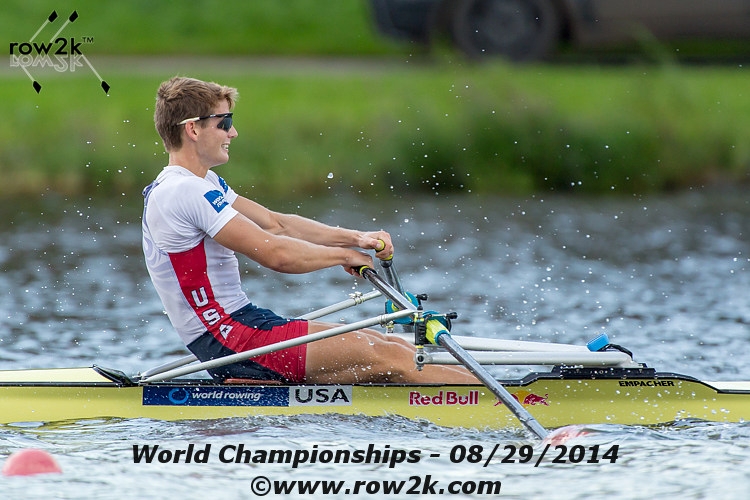 Rowing in the C final after having flipped in his quarterfinal the other day, US light men's single sculler Andrew Campbell plowed away from the field to win the C final by 12 seconds this morning. As he crossed the line, the announcer mentioned that Campbell had missed setting a new world record by 0.02 seconds.

Or did he beat the world record? Because that's what FISA themselves tweeted a few minutes later.

Here is what we did know:

And there was the matter of that Tweet, which still stands:

World Best Time for Andrew Campbell Jr in the of LM1x of 6:46.95 ! Congratulations! Way to turn it around #WRChamps

So we inquired, and here is what we found.

Ultimately, FISA has declared Campbell's time to be the official world's best time, and Azou's time from 2011 stands as the U23 record. I spoke to FISA to understand the logic at work, and learned that FISA uses the fastest time from the Senior World Championships and Olympic regattas as their official best times due to the fact that those are open regattas in which anyone can enter irrespective of age or other classification. Because senior rowers beyond age 23 cannot row in a U23 championship, they don't have an opportunity to race in the same conditions on the same course as a rower in a U23 or Junior Worlds, and so couldn't have an opportunity to break that same record themselves.

I talked to Andrew shortly after the race, and before the whole world record debate began

So, almost a world record; seemed like a pretty good row.
After a really disappointing quarterfinal, I decided that the best way to seek redemption in my own mind would be to set a world record in the C final. And I damn near almost did it.

As you were going down the course, did you know that you were on pace?
I knew that I was on pace because I could see on my GPS that I was going really quick. I decided to go a little harder in the first portion of the race with the hopes of setting the record, and that gamble definitely paid off.

You had decided pretty quickly the other day that you were going to give the C final a real go.
Someone in your spot could have said ah hell, this is over, but by the time that you were off the water, you mentioned to me immediately that you were going to go as hard as you can to see what kind of time you could get. How and when did that occur to you to do it that way, when someone could as easily have just felt defeated and given up.

I think doing it this way really relates to the way that I train, in that I train alone most of the time, and that I am always working off the Speedcoach. So my motivations are very much internal, in that what I care about most is personal improvement every day, and beating other people and getting big finishes at races isn't really the whole picture. So for me knowing that I am in very good condition right now and knowing that I am going faster than ever is more rewarding than winning a gold medal.

Now you are thinking team boats.
I'd like to give the double a try in the coming year, but I'm just happy to be rowing, and I'm looking forward to getting back to Boston and picking it back up there at the end of September.