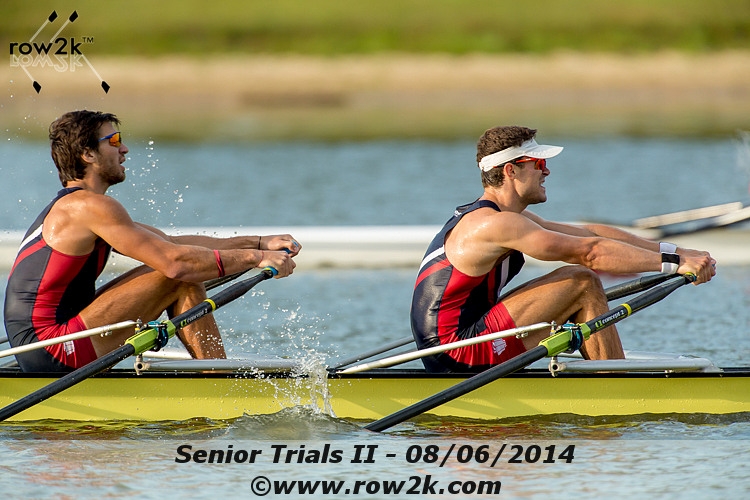 The quadrennial moves by quickly; yesterday marked two years until the 2016 Olympic opening ceremony, and the significance was not lost on any of the athletes, those who qualified for this year's Worlds, and those who did not.

On a flat-watered, sunny and cool Wednesday morning, twelve boats launched, and four landed as members of Team USA, save for a few crossed “t”s and dotted “i”s. For some of these individuals, this was their first senior team, and for others, this qualification is another team, another shot at gold, another stroke toward Rio.

Men's Single
The first of the last group to earn his spot on the team was also the newest US citizen. With only a few months as an American under his belt, Johann Rigogne won the men's single in 6:54.48. Though this is Rigogne's first US Team, it's not his first ever national team; he was on the French Junior National Team in 1998.

"In the semi I started fast, and everybody saw that, so in the final I started even faster because I knew they were going to try to catch me at the start," said Rigogne. "After the start I relaxed and tried to get good strokes and at the last 250 I was about a length ahead and I knew it was in my pocket."

Amsterdam was not his initial goal when he got back into rowing a few years ago, his eyes were set on the 2015 World Championships in his motherland, France. Having the first step to his ultimate goal of the Rio Olympics underway, he now has an additional World Championships to check out the field and get back to international racing.

Men's Pair
Glenn Ochal and Charlie Cole are not new names on the rowing scene. Ochal has been on seven national teams and Cole on nine, both ranging from Junior Worlds to a bronze medal in the men's four at the 2012 Olympics. After London, the two took some personal time off; neither competed at the World Championships last summer, but they came back this year ready to throw down as they row toward Rio. With only one other crew to race, they were in a finals-only race.

"It was an old college-style dual race. We had raced those guys in practice and knew they had good speed so our goal was first 1000 establish our rhythm and throughout the race we gradually walked it out, and they closed up a bit in the last 250. We wanted to make sure we were doing the right things to make our boat go fast. It wasn't the most exciting race with back and forth, it was a steady gain throughout the race and we held on at the end," said Ochal.

The pair has had a plan in place for a while, and will be heading across the Atlantic on Friday to train in Belgium for a few weeks before Worlds begins.

"We've had a plan since January on what we're going to do. We trained in the pair, with Mike Callahan coaching us. Have a plan, execute a plan and things will go well. This is only Charlie's second race since London, and my third, so it’s good for us to get those under our belt. It's physically and mentally very challenging, but we need these races to grow," he added.


For Devery Karz and Michelle Sechser, today's race was one they were hoping to not have to race. The lightweight women's double had qualified for the World Cup II by winning NSR II, but had to finish in the top four spots in Aiguebelette in order to automatically represent the USA at the World Championships. The World Cup race was less than optimal for the duo, as Sechser and Karz finished 8th, which meant that they would have to earn their spots on the Worlds team via this week’s trial.

"That was a tough pill to swallow and bouncing back from that took a lot of maturity and it was very humbling having our eyes opened up in France. We grinded so hard for the past five weeks to make sure that those errors never happen again, and it paid off," said Sechser.

The two were giddy and overwhelmed, not quite having yet processed that they had made it to the next step. For lightweight women, the double is the only Olympic-class boat, and the significance wasn't lost on them.

"Winning today definitely put us on a good trajectory for Rio. I think it would have been more of an uphill battle had today gone differently, but it's still anyone's game. Crazy things happen in the qualification year and knowing anything can happen keeps us motivated. One day at a time," said Sechser.

Karz has been on two U23 World Championship teams, and Sechser has been on two senior teams, including the light women's single at last year's world championships. For both of them, it's the first time competing internationally in the double—a boat that is often described as a marriage; a tremendous trust must exist between the two athletes.

"There's no finger-pointing, coming from the single to the double really ingrained that,” said Sechser. “It's just so much more fun to go through the journey with someone; the success and the hard times"

Men's Double
Veterans of the US Men's Sweep Team, and multiple time national team members, Ian Silveira and Alex Karwoski did not plan on holding two oars at this year's Worlds. The two have been training at the US Training Center, with the goal to make the Men's 8+ or 4-, but after they noticed things weren't quite going their way, they took matters into their hands, grabbed an extra oar each and started training in the double.

"Once we saw the writing on the wall that the sweep team wasn't going to happen for us this summer, we made the proactive decision, and wanted to take control of our summer and we got in the double and trained with the men's pair, and they helped us gain speed because they're a very experienced crew, and we trained a bit with the junior four, we just kept picking boats that were a little faster than us to push us," said Silveira.

Though it's Karwoski's first summer sculling (and his third ever sculling race this morning), the two threw down a good fight against experienced scullers Willie Cowles and Sam Stitt from Potomac Boat Club.

"I think it's good I didn't have too much time to over think sculling, I just had to learn to put my blades in the water and pull correctly. I was stroking for a little bit and had Ian coaching me from the bow, then we switched the line up two weeks ago, and it just clicked," said Karwoski.

"We expected the race we had," said Silveira. "We were a little slower off the line in the first 250, but our goal was to maintain speed. At the thousand, they [Potomac] took the margin we had gained in the first 1k and in the third 500 it was just taking shots back and forth, we'd get some, they'd come back. With 600 to go it was the same scenario as the heat, they have a lot of closing speed, so they gained some momentum on us, they took the lead just past the 500m mark, and continued to build their lead until about 300 to go. I remember taking a peek over my shoulder around 300 and I saw us just sitting on the stern tip and I could tell we were moving and I just said to Al 'Now, go now. We're moving' I heard him just call for the last 20 and I could hear the excitement in his voice. We had a really good last 15 strokes, and we were able to dig out the victory."

Though they approached today's race with some frustration for not having made the sweep team, the support from their teammates with whom they have trained all year was motivation.

"Today the sweep guys were in the middle of rowing when we were racing, and from what we've heard, the coaches got the call that we had won and let them know during practice and they just went insane. To hear that, it's a good example of the team that we have here. Even though we didn't make the sweep team, we're still a part of this team. It's a team now, not just a bunch of guys fighting each other for seats," said Silveira.

@USRowing Get ready for 'one big party!' The Rio Olympics are just 2 years away http://t.co/heBV0ol5Gj

With this morning’s four deciding trial races all won or lost by margins of less than five seconds, spare a thought for those athletes who came up on the unhappy end of that result today (there was a past US Olympian who failed to make this year’s team in every single final this morning, whew). The pool of athletes competing for seats in Rio is already very deep indeed.

The 2014 World Championships in Amsterdam, the Netherlands, begin August 24th. Follow row2k for full coverage of the event for photos, athlete interviews, videos and more! Best of luck to Team USA. 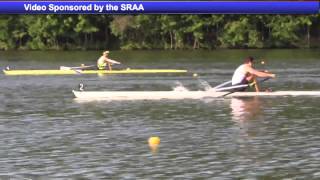