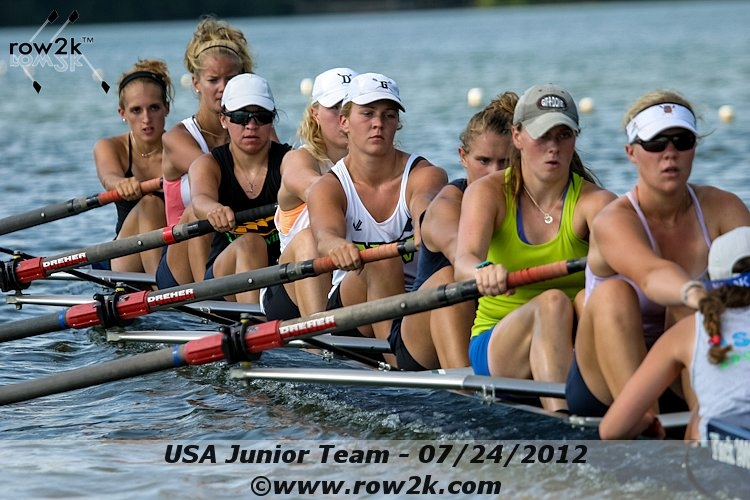 PLOVDIV, Bulgaria – They came to the Plovdiv Channel with their faces painted red, white and blue, carrying flags and with USA written all over themselves.

It’s been like this all week at the World Rowing Senior and Junior Championships in Plovdiv, Bulgaria. Since the first day, when the spares raced, the young men and women of the United States junior national team filed the stands and cheered for their friends and teammates. They supported each other in the hotel and at the racecourse.

And, they were there again today. Some of them medal winners, some of them not, but all of them part of a bigger thing - an organization that is part of a system put in place six years ago and developed over time and is now producing results.

Three silver medals yesterday. Another one today in the junior women’s eight.

The U.S. got off the line behind Romania and chased them the length of the course with Italy, Germany, Russia and Belarus left to fight it out for the bronze. The U.S. finished second in 6:37.44. Romania won in 6:34.98 and Italy rowed from fifth place to third to take the remaining medal in 6:41.21.

Across from the grandstands, American flags carried on poles, blew in the wind as the grandstands filed with teammates, family and friends who cheered them loudly. And when they got to the medals docks and got out of the boat after the race, the nine girls went immediately to grandstands barrier to embrace their friends.

“I don’t even know what to say about it,” Spillsbury said. “It’s just great we got to take second place and we just raced our hardest and that’s a most amazing feeling. Our main goal was to keep our third five hundred the best we possibly could because that’s where we fell off in the heat. So we took a ten for all of our girls and our entire team.

“This is the first time the U.S. junior national team has won three medals in sweep events and we just wanted to continue that and it was our time to finish the goal.”

The eight’s performance finished off a week, years actually, of training and preparation that has elevated the junior national team system across the board. The junior women won four silver medals, two of them in events the team has never medaled in - the women’s pair and the women’s quad.

The junior women’s double of Mackenzi Sherman (Los Alamitos, Calif.) and Olivia MacLean (Lancaster, Mass.) rowed against Lithuania, Germany, Romania, Hungary and France in the final and finished sixth in a time of 7:35.94. Lithuania won the race in 7:18.80 with Romania finishing second in 7:23.47 and Germany took third in 7:24.52. But this was the first time a U.S. junior women’s double had reached a final.

Tsiavou, who won a bronze medal in the London Olympics in the lightweight women’s double, added gold to her summer in 7:32.37. Austria was second in 7:37.04 and Belarus finished third in 7:38.93.

Of the 20 crews entered in the event, 10 rowed in the top finals, eight rowed in the B finals and two rowed in C finals. Three of the crews rowing in the finals were senior boats. The rest were juniors and part of a system that was overseen in large part by Steve Hargis, USRowing’s junior national team development coach.

With Hargis, USRowing started a camp dominant system six years ago on the women’s side that gradually increased the standards of performance and fitness of those who wanted to participate, recruited the best junior coaches available to guide them, and then integrated a coordinated effort with the sculling coaches and programs to make one cohesive unit.

He turned the women over to head coach Liz Trond, and is now working to replicate the system on the men’s team.

“I thought that the junior national team’s performance overall was very good in this extremely competitive field that we saw here this week,” Hargis said. “This is one of the biggest turnouts we’ve had. I think it’s the second largest ever.

“Obviously, on the girls side, the development program we’ve had in place now for the last going on five or six years is really starting to pay dividends. We’ve got quality coaches and quality athletes. We’ve increased the standards and we’re seeing the results now.

“On the guys side, we’re a couple of years behind. But we’re starting to find the talent. We have eight returnees for next year. I thought the coxed four performed well as a third priority boat and the straight four, that was one of the tightest B finals in many years with good times, faster than the A final.”

“The eight was a little disappointing,” Hargis said. “When they had the opportunity to really be a player in the race at the thousand-meter mark, they had a little hiccup and it just didn’t come together for them. But I think that’s just a little bit of youth in the boat. Now going forward we’ll use that as part of our total growth and development on the boys side,” he said.

“But, all and all, we came here, we got six A finals and that matches our best. We got four medals and that’s the best we’ve ever done. That’s the incremental change over time on the women’s sweep side,” he said.

“We’ve had A finals before, we’ve had two medals, and now all of a sudden we have three solid silver medals on that side and that’s spectacular. I’m really happy.”

Rowing in the B final today, the lightweight men’s pair of Will Daly (Vail, Colo.) and Greg Flood (Tulsa, Okla.) raced Mexico, Canada, the Czech Republic, New Zealand and Ukraine and finished third, taking ninth place over. The U.S. finished in a time of 6:35.38. The Czech Republic won in 6:33.83.

They were followed by the junior men’s pair of Justin Murphy (Montclair, N.J.) and Nathaniel Goodman (Montclair, N.J.) who took on Belarus, France, Ireland, Croatia, and Poland and finished sixth, placing 12th overall. The U.S. finished in 6:57.78. Ireland won in 6:47.92.

In the last B final of the regatta for the U.S., the junior men’s double crew of Chase Buchholz (Norfolk, Mass.) and Richard Wagner (Providence, R.I.) raced against Slovenia, Serbia, Norway, France and Lithuania and finished second in 6:37.91 for eighth place in the regatta. France won in 6:36.44. 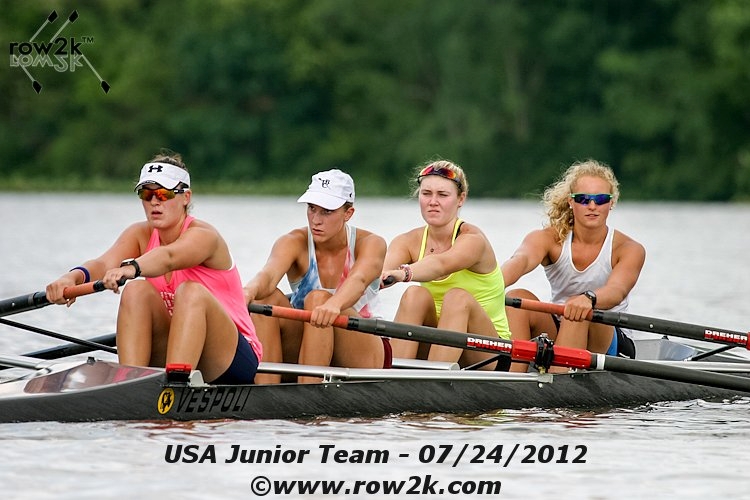 Worlds 2012: Rocking and Rowing on Plovdiv Channel
Get our Newsletter!
SUBSCRIBE
Support row2k!
If you rely on row2k, please support row2k!