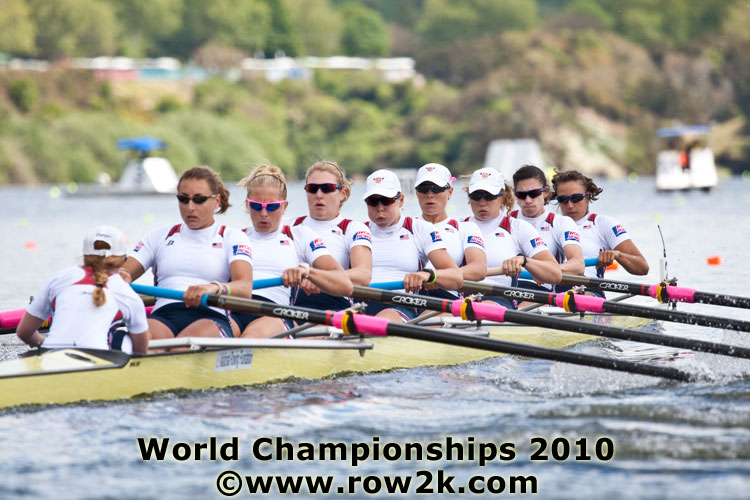 The US Women's 8+ won their heat

Wow, what a morning of rowing today; because it's really the first round of do-or-die racing, you'd expect the reps to be really competitive, but the real highlight going into noontime was the heats in the Men's & Women's Eights.

The US Women's eight, rowing a lineup radically different from the eight that claimed the world title in Poznan last year (only stroke Kady Glessner returns), absolutely whomped their heat race today, winning by open water over the crew from the GB. The appropriately fired-up quote from the FISA announcer during the race: "Just LOOK at the USA go!" The US women rowed the fastest times/fastest splits at every juncture, and while the two-to-advance scenario definitely took the pressure off the GB crew running in second place, this field is not slow.

"When we left Princeton, our goal was to get a little bit faster every day, until the final" said US coxswain Mary Whipple. "There are definitely things that we're working on, and there are definitely some internal goals we want to meet. In all of our race walkthroughs, our characteristic has been to be down off the start, so we were kind of pleased with being in the pack. For me, it was fun. We definitely felt some power today that we haven't felt before...and we liked it! This group is very young, and hopefully they are getting addicted to this speed."

Canada took the win in Heat 2, ahead of Romania. The Canadian women look poised and clearly have come to New Zealand with some ambition this year.

"This year, the Men's Eight [event] is loaded," said US Men's 8+ coach Kris Korzenowski after two heats of top-flight racing in that event, and this was almost an understatement. The first heat saw the favorites Germany win, but they were under pressure something fierce from the hometown crew from NZ who rowed a rager of a race down the outside of the course and just lost to the Germans by a seat or so, perhaps two.

Incredibly, New Zealand wasn't even entered in this event at Worlds in Poznan last year; the crew is primarily made up of U23 athletes, and judging by the reaction of both the crowd and the athletes, they'll be ready to row like that all week. Watching this dark-horse crew row this morning was a little bit like watching 1960s or 1970s era sport; damn the science, and full speed ahead, sheer will and desire. "The Eight is loaded with boats of very similar speed," said Korzenowski. "Whichever crew has the better day, the better race is going to prevail."

The US Men's 8+ could not quite equal the performance of the US women, but nevertheless rowed a competitive piece in their heat, finishing 3rd behind a polished looking GB crew and the Australian eight in the second heat of the event. "Our plan was to stick to Great Britain," said Korzenowski. "I am very positive about this piece, the third place should give us a relatively good repechage."

Only the winner advanced in the Men's Eights, so Germany and the GB moved on to the final today; the other 9 crews in the event will fight it out in two reps on Thursday.

The US had a good day at the reps, with the Light Men's Double of Brian de Regt and Jon Winter holding their nerves in a tight race to qualify for the semis, while Ken Jurkowski and Lindsay Meyer in the Men's and Women's Singles, respectively, also took care of business, advancing to their semis.

"Lindsay had a much better row today," said coach Conal Groom after Meyer posted a convincing win in her rep. "She was off her game a little [in the heat] yesterday, and rowed a little defensively. Today, the plan was to get a good start, get out in front, and do what she needed to do."

Ken Jurkowski had a solid row to advance; the Men's single has a load of good entries this year also, and there have been a few surprises: Canada's Malcolm Howard, who had some great results earlier this year on the World Cup circuit, failed to advance past the reps and will row in the C/D semis. Joining him there will be Juho Karppinen, son of the legendary Pertti, three-time Olympic Gold medallist in the Single.

The US also rowed in three "preliminary races," or races for the seeding of lanes, in the Lightweight Women's Quad, Men's Coxed Pair, and Lightweight Men's Quad. Strategies definitely differed between the US crews in these races, as the Men's Coxed Pair gunned it all the way to the line, just finishing fourth, while the Lightweight Women's Quad made the race a technical outing, rowing down the course at quarter feather well behind the pack. With the stern pair of the quad, Abby Broughton and Ursula Grobler, doubling up, taking an easy trip down the course would appear to make sense.

The US Men's Lightweight Quad also rowed in a preliminary race for lanes today, although their race had to be delayed after the crew from Denmark broke an oar in the warmup. The German entry in this event also "strolled" down the course in this one; the stern pair is also doubling up.

The only US crew not to advance was the Lightweight Men's Pair of Mike Nucci and Evan Tsourtsoulas, who could not respond when the lead crews in their rep cranked it up for a three-way fight in a two-to-advance rep; the crew will now row in the B-Finals on Friday.

The US Adaptive crews split their reps today, advancing to the final in the Adaptive Mixed Four (though the US profited from a heartbreaking and ill-timed late crab by the Polish crew), while Ron Harvey, rowing in the Adaptive Men's Single, fell short of advancing and will row in the B-Final.

Talk about your starting line jitters; in the rep of the Light Men's Fours, when the starter was polling the crews and called out Egypt, one of the rowers in the EGY crew responded with a bellowed "ALLAHU AKBAR!!!" that could be heard all the way back on the shore opposite the start, whew.

A little more on Team NZ's big days yesterday and today; the team was selected back in March, and, with the exception of trips to World Cup regattas and such like, has trained right here on Lake Karapiro since then. Rob Bristow, Rowing NZ and friend of row2k, gave us a tour of the boathouse yesterday, it's impressive stuff. Sitting just about at the 1750 mark, the boathouse has boat bays below, workout space above and a clubroom with photos and memorabilia from NZ's big rowing wins topping it off. There's something to be said for homecourse advantage, it would seem to me that, if you trained on this lake all year, then just walked out of your own bay doors for a heat on your own lake, it would be a little bit like practice, with every little tree stump and meaningful landmark right there, along with some high-quality playmates.

In the course of a year, the NZ U23 and Junior teams also train here; in addition to the 2000m course, the teams have 15 km of rowable water up beyond the course. In all, it would seem to add up to a near-ideal setup for getting a lot of athletes up to speed.

Today is Melbourne Cup Day here in NZ; the Melbourne is the NZ equivalent of the Kentucky Derby, and Karapiro is deep in horse country; in fact, the host city of Cambridge is considered one of the top four regions for horse breeding world-wide. The local volunteers here at the Media Center are all celebrating by wearing their most ridiculous stylish hats to work today.

This event has been a boon to the local school-aged population, as kids have variously gotten time off school these first couple days of racing to come down and watch.

FISA keeps it conservative with regards to the evolution of their venue music playlist; if you feel like you've heard The Verve's "Bittersweet Symphony" at every Worlds or World Cup in the past 10 years, you're probably right.

In terms of tunes, the sturdy wireless network here allows for some good interactions among journos here; although, when I tried to check out a few colleagues "shared" playlists in iTunes today, I got the message that "this user has reached their maximum share of 5 users per day."

Finally, it definitely takes a while, but the ubiquitous Nescafe here in NZ does grow on you. Then again, if you're desperate, you'll drink anything. 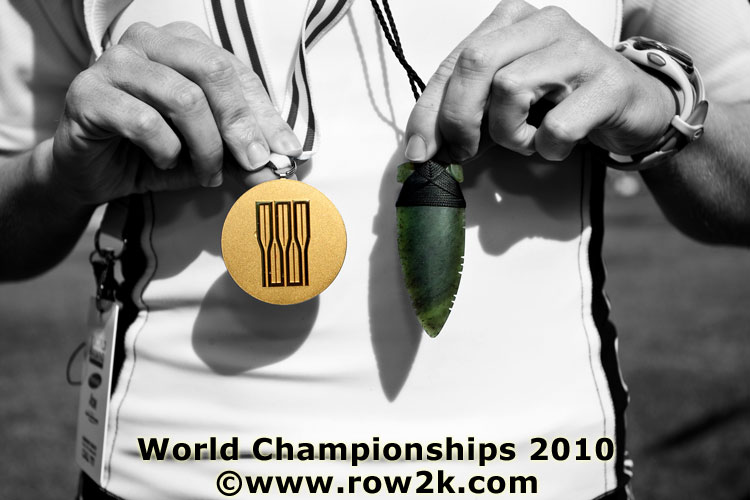 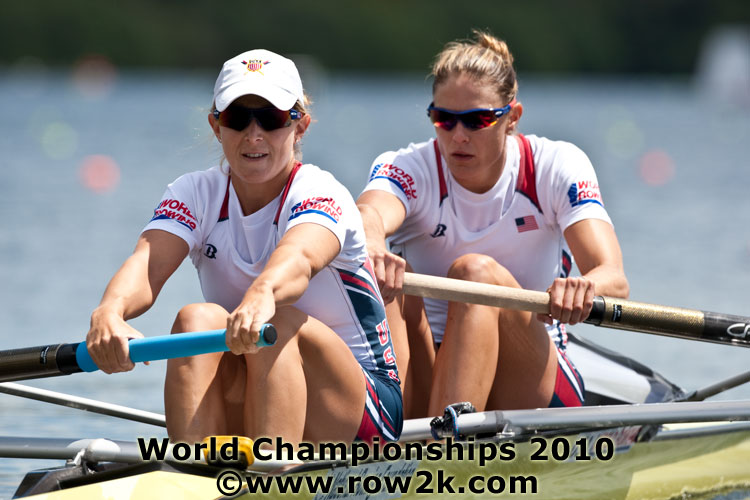 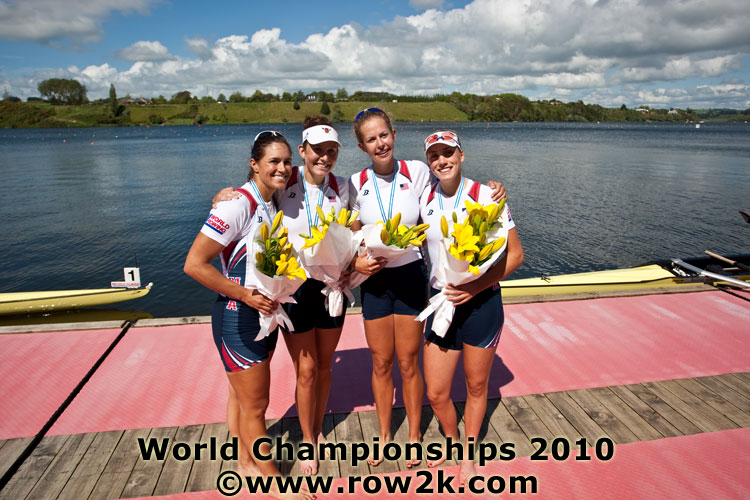