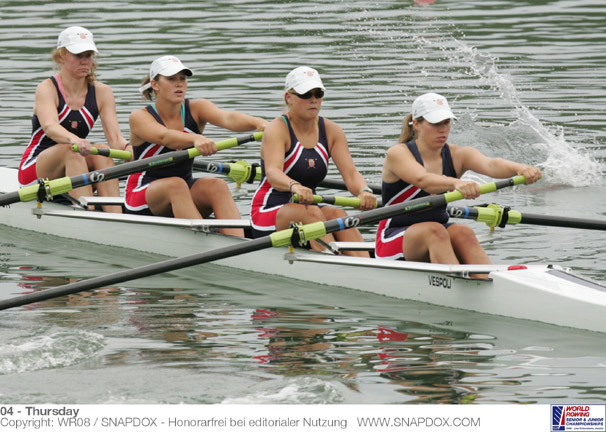 With the qualifying heats in the rear view mirror, racing this morning ramped way up at the Senior/Junior World Championships. Only the juniors took to the water today as the seniors have already taken care of their heats, reps, and quarterfinals. Although we still have not seen the sun (really, not even for one second), conditions for racing today were absolutely perfect. Temps are still in the mid 60s (I had to multiply 18 Celsius by 9/5 and add 32 to get that one) and any breath of wind that you could feel was helping the rowers. Because conditions were nearly neutral and very consistent, it was a good morning to see what your true speed is and how it matched up against crews in other races.

Eleven US crews were in action this morning, looking to advance to either the A Final on Saturday or tomorrow's semi final rounds. With everything on the line now, there weren't a lot of crews out there shutting it down. Depending on your speed you had to either throw in the kitchen sink without being able to worry about tomorrow, or you were comfortably in qualifying position being careful not to get passed by desperate crews trying to pull off miracles from the back of the field. This exact scenario presented itself plenty of times today, but no better than in the second quarterfinal of the JM2x. This was by far the most dramatic race of the day and it happened to include the US 2x of Austin Meyer and Tom Nesel. Before getting to the story we need to set it up a bit...

Yesterday I wrote about the US JM2x, and talked about their quiet confidence and the whispers about their speed. They went to the line this morning looking to finish in the top three out of lane 6 to punch their ticket to the A/B semi final. Ok, the race of the day.

Mirror flat conditions, US is in lane 6 next to a gutty Belgian crew, Romania, Estonia, Lithuania, and a crew that did not factor into this story. US breaks off the line last, I mean way back. Maybe they meant to do this. After all they are both going to Harvard next year to row for Charlie Butt's lightweight squad, famed for its closing speed and even splits. Anyway, they spot Lithuania more than five seconds at the 500m mark. At the 1000 they are more than 7 seconds behind LTU with loads of open water between them and third place. This is when Nesel gives the call and Meyer noticeably pops their rating. US lays down the fastest third 500 in the field, but were still 3 seconds away from qualifying as the announcer starts to include them in his calls. With 400 to go they got their bow ball onto the deck of Romania. With 250 to go the US still had to find a length on Estonia or Romania but was moving with every stroke. With 150 to go the US draws within a half length of Estonia and WHAMMO, Estonia caught an epic, over-the-head, boat-stopping crab. Chaos on the water, groans from the crowd, the US storms past and claims the final qualifying spot. Their time, 6:42.93, 3:21 for each 1000. Estonia, after being comfortably in second place for 1950m, finished last. Whoa. In some ways it might have been even better to see the Americans come through without the benefit of the crab, but we'll never know if they would have. Ya know, it really doesn't matter. The US JM2x is in the A/B semi final on Friday.

Another impressive performance was turned in by the JM2- of JP Hogan and AJ Brooks. They didn't win their quarterfinal, finishing just two seconds behind a strong Slovenian crew, but were able to easily qualify in the top three. A quick comparison of their finishing time of 6:53.6 (remember, because of conditions we can do this today), sets them up very well for tomorrow's A/B semi final, as they were the second fastest crew of the twelve qualifiers today. Granted, several top crews were able to cruise a bit in their respective quarters, but after an even a closer inspection of splits you cannot ignore these guys from Newport. Their speed is right there in the first 500, they have plenty of speed at base in the middle 1000, and today they raced their last 500 much faster than anyone else in the event. Hopefully this is a formula that will help them get out of the A/B semi tomorrow and into the A final.

In the JW1x, Cara Linnenkohl, was able to easily win her repechage and advance to the A/B semi final on Friday. Despite giving up a small margin in the first 500, Cara moved through her Croatian counterpart at about the 600 pole and never looked back. She cruised to the win, almost eleven seconds ahead of second place in a time of 8:05.72 Getting out of the A/B semi and into the A final will be much harder but this kid rows powerfully and sharply enough to pull it off. Her winning time today was the fastest time in any of the four quarterfinals.

In a race for lanes, as there are just five boats entered in their event, the JW8+ debuted and did not disappoint, crossing the line first ahead of Germany and Romania in a snappy time of 6:25.88. With this race for lanes becoming an annual rite in this event you can bet that the coaches behind Germany, Romania, and the US were not going to tip their hand. This course is flat out fair, so the results from today were basically meaningless and we can get on with the good stuff on Saturday. Anyone who has seen a few junior women's eights can tell you that this year's US crew packs more punch than usual. It doesn't hurt that their six seat and seven seat, Reynolds (Princeton) and Roddy (Stanford) have a year of collegiate rowing under their belt. I guess we can thank their parents for sending them to kindergarten early. Hopefully their experience and the experience of two returnees from last year's bronze medal crew will translate into a place at the top of the podium on Saturday.

Two other US crews, the JW2x and the JW4- qualified out of their respective repechages. The JW4- advanced straight to the A Final on Saturday by finishing second in their race today, in a time of 7:10.4. In the first 500m, the US followed GB off the line establishing their boat in a solid qualifying position over third place. Nothing changed much in the next 1500m and it looked like the US had more to give coming in front of the grandstand. Stroke Eliza Hastings (Agnes Irwin HS) looked long and chose not to bring the rating up much in the last 20 strokes.

In the JW2x, the US crew of Emily Eiffert and Mairi Mckellop was never in jeopardy of not qualifying for their A/B semi tomorrow, as the finished third in their rep. They got clear of fourth place early in the race but found themselves out of the mix for the top two spots as well. It was clear that they were happy with the not having to race anyone today, as there was no evidence of strain on the girls as they came in front of the grandstand. This is twice now that the US JW2x was able to coast across the line to advance, a luxury they definitely will not be able enjoy in their A/B semi tomorrow.

The JM4+, JM1x, JW2-, JW4x, and the JM4x all failed to qualify for the top tier semi finals and finals Friday and Saturday.

The JM4+ got off of the line better than in their heat, but could not muster a charge in the final part of the race. They will race in the three boat B final for 7th thru 9th place on Saturday morning.

Similarly Keenan Reelick, rowing in the JM1x, got off the line very well and actually was in qualifying position halfway through his race. He was not able to maintain his speed in the later part of his race though and fell to a fifth place finish. Keenan will boat up again tomorrow and race in the C/D semi.

The JW2- off Stief and Maginnis fought valiantly but missed on qualifying for Saturday's A final by 2.1 seconds, finishing in third place in their rep. They made a nice move in the middle of the race to get back in contention, raised their rating numerous times over the final stretch, but could not punch through Latvia for one of the spots in the A final. They will race in a four boat B final on Saturday morning.

The JW4x of Reelick, Dickson, Van Fossen, and Knaster also made some moves in the latter part of the race to get in contention but were not able to finish in one of the three qualifying spots for Friday's A/B semi final. The quad charged through the field into fourth place and was within a half length of Russia for third with 500 to go but ended the race fifth, four seconds out of the money. These girls will race in the C/D semi final on Friday.

The JM4x of Gabriel Fort, Harold Fort, Matthew Sobotka and Ian Stewart will also race in the C/D semi final on Friday. The crew finished their repechage in fifth place. While their results would indicate a less than stellar performance, these guys have given about as much as you can ask for from a "lightweight" crew. Their boat average is a shade under 150lbs and not one of these guys is over 6'0". As we have seen all year, these guys are no joke when it comes to racing guys their own size. Regardless of how they do in the rest of the regatta they will be able to go home and shine their medals from the Stotesbury Cup and trophies from the US Youth Nationals.

The concession stands and the bouncy castles aren't going to see much action tomorrow, as a full day of semi finals racing starts at 9:30am tomorrow. After today's standing room only crowd, not sure where everyone is going to sit, but I am sure we can figure it out. The seniors will be back in action too, so make sure to check back to row2k for full race reports on tomorrow's racing. 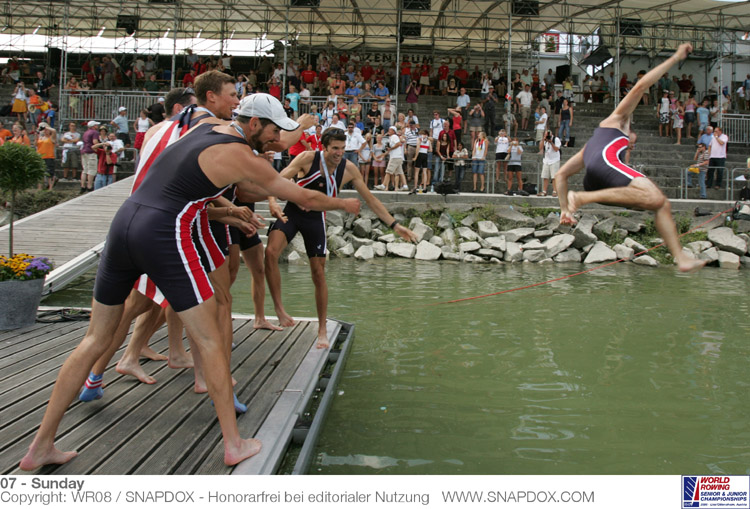 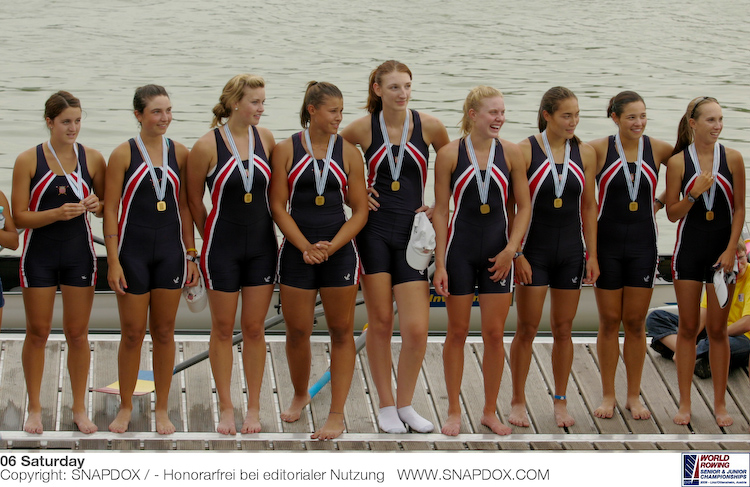 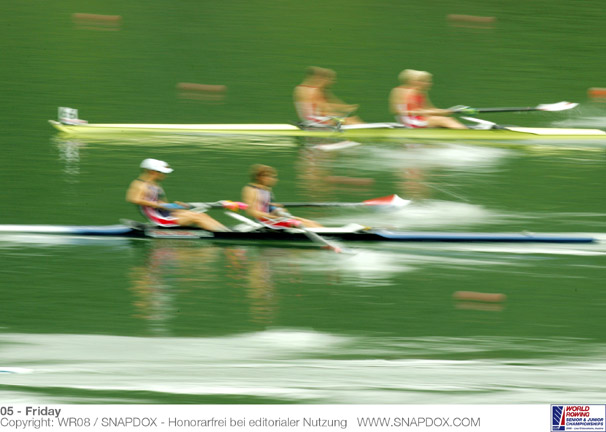 Thrills, Chills and Close Racing in the Semis at Worlds 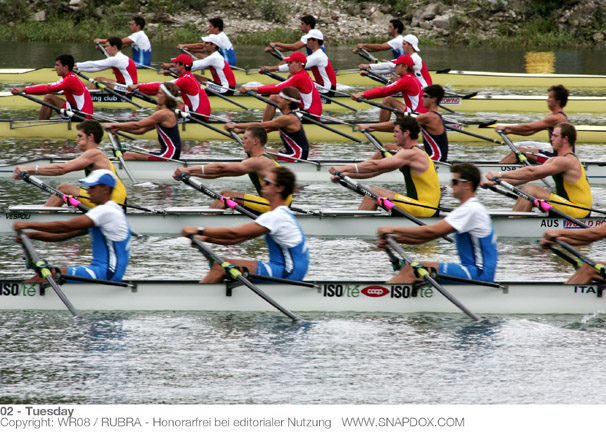