US M8 wins their semi

As Olympic qualifier spots continue to be doled out and locked up, the second day of semis (along with a couple oddly scheduled late week reps) concluded today with victories for two North American crews in the men's eight, mixed results for the US quads (the other big boats), and a lot of really happy rowers among those who helped get their country berths in Beijing; the finish line area was marked by celebrations after reps and semis that wouldn normally be reserved for gold medal efforts - which just goes to show exactly what is on the line this year for so many crews and countries.

We've reposted the qualification charts from yesterday below; we should also note that all four US adaptive teams qualified for the Paralympics out of their reps and semis yesterday.)

The US and Canadian crews won their respective semis in the men's eight; the Canadians all but dominated their race, blowing out a formidable first 1500 meters before letting the field come back in the last quarter of the race; while the US rowed down a fast-starting Russian crew to win their heat in the last few strokes of the race. The time difference between the two heats was significant - the Canadian time was upwards of five seconds faster than the US - but it's hard really to compare the two races; either way, the final looks like it will be such that you don't want to be off getting a Weinerschnitzel when the big eight comes down the course on Sunday. Former US men's four coach and Oarsome Foursome vet James Tomkins' Aussie eight did not make the final; they'll be looking for the coveted seventh spot in the petites on Sunday.

I can't recall whether or not I mentioned already that the Russian men's eight looks a bit like Russian eights of old - understroking the field while still barreling out to an early lead. The crews look like they are rigged exceptionally heavy, as they did about 10 years ago when they rowed a very similar race against the Americans in the final, and rows with a similar rhythm and technique, which had been absent for a few years.

After placing third in their semi, which automatically qualifies them for the Olympics, the Poles had a full-blown celebration in the finish line area, complete with air-punching coxswain, oars held aloft, and lots of loud noises.

The US women's quad waited four days to have a chance at Olympic qualification and the A final, and clearly the downtime did not rattle them, as they had a exceedingly tidy and composed rep today to place second behind the stacked German crew to make Sunday's final. "It's been a bit of a time warp," admitted bowseat Lia Pernell of the long wait for the race. "It was great to have a good race."

The crew had given only a little thought to the Olympic implications of today's race. "I guess I thought about it a little, but definitely not during the race,": said stroke Ellen Tomek. "We were just working to make the final."

The effort could not have gone a lot better; the crew punched out to a lead early, led the field for about 700 meters, then ran away with the race along with the German crew. At 500 to go, the crew had a small patch of open water over the third place French, and although the French closed the gap noticeably with a very fast final 500, the US crew was never really threatened.

"We executed really well," Pernell said, "I don't know if we ever felt like we were in trouble near the end, but we definitely rowed a full race right through the sprint."

"The French were coming up really fast," Lianne Malcos agreed emphatically. "We definitely went hard all the way to the line." The crew will need a great row to make the medals stand in this event, but of course has already qualified the boat for Beijing. They cooled down in style later.

In the other semi, the Canadian women's quad made the grade to advance to the final and earn Games qualification in just the opposite manner, with a slow-ish start and a big middle thousand that almost earned them the lead.

The US men's quad tried to reverse their race plan from the rep, pushing out to a lead early, but late in the race seemed to shut down once A final advancement no longer seemed in the cards; the crew crossed the line at just over 30 spm. They may have been saving their legs for the B final, where five Olympic spots will be on the line.

The US light men's sweep squad did not have a great day; the pair placed fifth in their rep, and head to the B final, and the light four suffered from some steering problems early in the race that caused them to spot the field almost a full length; despite a startling surge mid-race that pulled them up into fourth position in clear contention for advancement - they had the fastest third 500 in the heat - the crew faltered late and fell out of the back of the pack as it charged for the line.

Similarly, the US light women's doubles had some good moments - the crew posted the fastest second 500 to draw into the third qualifying position at the 1000 - and some bad ones - their third 500 was the slowest of the race. In the end they were about a length short of A final speed, placing fifth behind China, Greece, Germany, and Italy. The field is pretty tight overall - about five seconds would seem to separate the top 10-11 crews - and a good row on Sunday will be critical for anyone hoping to make the Olympic cutoff.

The US light men's double won their D final this morning; you know they didn't want to be there, but to go out on a win is the way to go out.

There sure seems to be a lot of withdrawals this year - no fewer than 12 crews or scullers had withdrawn from the regatta as of this morning, in almost all cases "for medical reasons."

I believe I can honestly say I have never heard the cheer "Po-LAND! Po-LAND!" before today. Just a day's drive away, the Munich venue is almost in their backyard; the grandstands had almost a hometeam feel when the Polish men's quad won their semi, and the men's eight made the final (in both cases qualifying the boat for the Olympics).

The Polish quad waited around in the finish line area to watch their eight qualify as well; they were standing in their boat as well, even before the POL eight stopped rowing. The same guys also took a lake bath shortly afterward; they were clearly making a day of it.

If trips to Beijing are the measure, New Zealand is having a great Worlds; the Kiwis have qualified seven crews for the Games, their highest ever tally.

The morning started out with beautiful sunlight that almost gave lie to the 48 degree temps, but it wasn't long before a cloud cover rolled in along with a firm, direct tailwind. Several crews are using the tolerably cool water of the basin to aid in recovery after the race; we'll have pictures once today's galleries post.

The several dozen flags opposite the grandstand go up every morning and come down every night; interesting job.

The grandstand, which is apparently the largest rowing grandstand in the world, was very nicely packed today, and the fans were exceedingly generous with applause; the cheering and clapping started with the first E final this morning, and just increased throughout the day. Several German crews did fly-bys after good rows; the crowd obligingly cheered them on without hesitation. I believe the stands are sold out for both days this weekend; pretty impressive.

With Marcel Hacker racing tomorrow, and the men's eight, women's eight, and women's quad racing Sunday, over 500 media people are expected each day this weekend, with an extremely strong German presence expected. After placing third in their semi today to advance to the final, the men's eight is already feeling some of the pressure from the media, some of which are already stripping the defending World Champs of their title. Let 'em race, Herren! 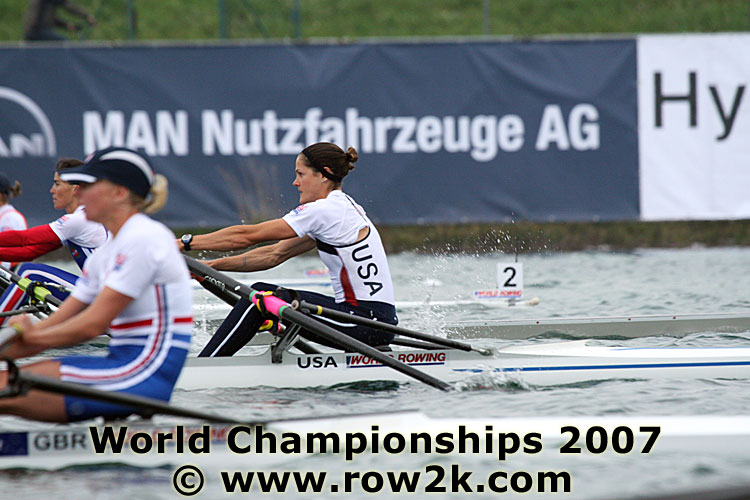