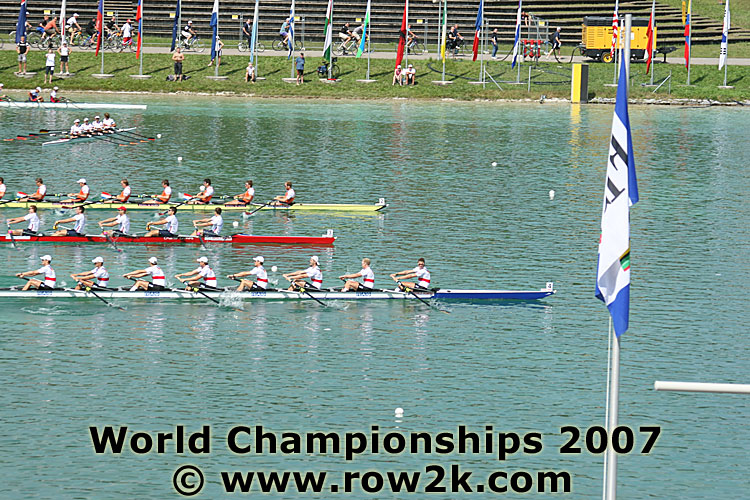 Battling it out in the big boat

Two days running, I find I am writing anything but the story you might have expected to read. A day after the three US singles competing at Worlds won their respective heats, an unprecedented occurrence for the allegedly big-boat adept US squad, today both the men's and women's eights are headed for the repechage after failing to win their respective heats.

The US women's eight in particular is a bit of a stunner result; the crew includes eight of nine members of last year's World Champion and World Record-setting crew. They appeared headed for a solid if not dominant heat win until the Australian crew wound it up astonishingly in the final 500 meters; the US crew had no answer, and the Australians roared through to win the heat and take the sole spot to qualify directly to the final.

And we'd guess you can say the Romanians are back. Romania came from 2 seats down to three-quarters length up in the last 600 meters of the heat against Germany today, sending the Lucerne silver medallists to the reps; for the German stern pair, who now have a semi in the pair along with the rep in the eight, the week just got a bit longer.

The Romanian women's eight is a true juggernaut; almost the entire program takes two years in "retirement," and they come back a few months before the World Championships and blow open their heat, rowing almost identically to how they always have, with a brutal second 1000? Woah. With six of the nine members of the Athens gold medal crew back in the fold, it seems like experience counts for a lot. You do have to wonder just how retired those folks were, tho; maybe they did some hardcore ballroom dancing? Whatever they're doing to stay in shape, it sure shows up on the water.

You could wonder if this morning was the right time for a crew like the US women's eight to make a mistake, if there is a good time; certainly nothing will be taken for granted the rest of this week, and probably the rest of next year. US women's coach Tom Terhaar will likely be looking for the crew to come together this week; "They rowed hard and did what I asked them to do, but it is their first racing 2k this year in this lineup," he said after the race. "I think there is room to improve."

Big sprints were the order of the day in the big boats; the Dutch M8+ dropped their fastest 500 of the day to take the second and final qualification slot from the US M8+; on most days, being down .72 to the defending world champs would be a good thing, but today that was only good enough for the rep.

Both the Aussies eights did it in the sprint as well, with the Aussie women pulling through the US W8+ to win the heat and claim the advancement spot; the US W8+ is also headed to the rep, also with doubling implications for Anna Mickelson in the W2-.

In the men's eight, the Canadian men certainly proved their World Cup form was no fluke, posting the fastest winning heat time by about a length compared to the other two heats. Meanwhile, the Australian men, with James Tomkins moving to stroke from seven-seat, proved their 10th-place World Cup form definitely was a fluke, pushing the Canadians the whole way to fall by a few seats, but qualifying directly to the A final.

With some fairly permissive advancements to the quarterfinals, the US light men had a relatively easy day of it today in the Olympic events (light four and double), but both crews advanced with solid, tidy second-place efforts that show some definite upside potential for the week to come. The light double in particular had a nice 2k row; both their third and fourth 500s were the fastest of their heat. After spotting the French crew almost a length in the first 500, the light men's four ran a close second to France for the rest of the way to place second and into Wednesday's quarterfinals.

"This was a really good start for us," said light doubles coach John Riley after the race. At the World Cup, they had a very slow start, then a great middle 1000, then couldn't put together a fast last 250, so for the Pan Ams we tried to fix up the ends of the race"At Pan Ams, they had a great start, but it was a little too good, because they then blew up at the finish. So here they had a decent start - maybe the first 250 could be a little faster - and I was really happy they held off New Zealand here at the finish."

"The Brits pretty much controlled the race, but they're a medals boat, and we're still a day-to-day crew for now," he said. "After today, there are fewer crews going after the same cheese, so it gets tougher."

The adaptive crews rowed their heats today as well; while the overall standard of rowing still has room to improve, the crews at the top of the ranks are displaying greater athleticism and rowing skill than ever before. The Italian mixed double in particular rowed an impressive race to upset the defending World champ American double of Madsen and Brown; the rowing looked like characteristic Italian rowing, with long, complete finishes and very nice rhythm.

Another upset came in the Arms Men's Single, where two-time World champ Dominic Moneypenny of Australia was rowed down by Eli Nawi of Israel. For the US, Ron Harvey dominated his heat of the same event, leading the whole way with a very controlled row.

In yesterday's report I hypothesized that no crews would show up at the line without the required World rowing undershirt, but I was wrong; it happened in the very first race of the day when the Dutch light men's pair was without tees. That was the only one, thankfully.

Comment of the day on the starting line: "Wide awake."

Hard water: The bottom of the Munich racecourse basin is lined with limestone gravel; the limestone is absorbed into the water, making it very hard. By some estimates, times in Munich will be 8-10 seconds slower than on other 2k courses as a result of the heavy mineral content in the H20.

German sculler Marcel Hacker, who has roots in southern Germany, has been in heavy rotation in the local press, with interviews, photo shoots, etc. A few choice tidbits: "I think of myself as the coolest guy; a lot of other rowers resent that a little bit."

Tuesday's schedule includes a very mixed collection of races; there are races for lanes (inexplicably termed Tuesday Final 1 in the official parlance) in the final-only events the women's four and light men's eight, two dozen reps, and a dozen quarterfinals. Good luck to all racing!