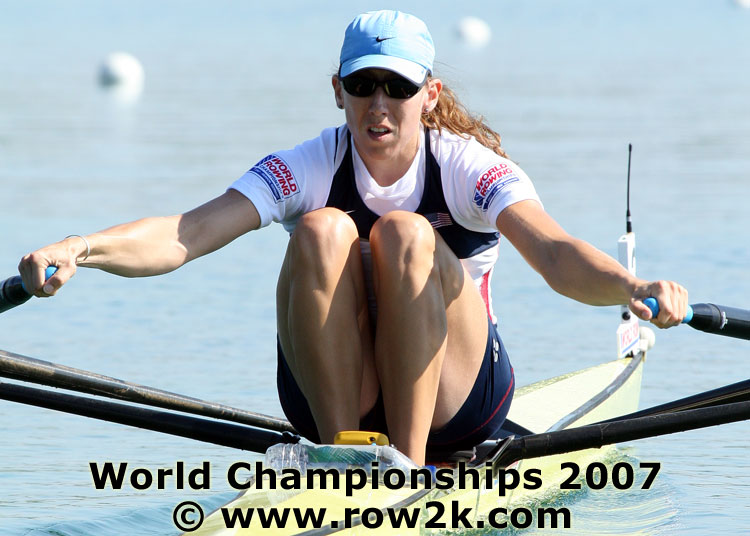 It's an unusual morning when the United States best performances come in three winning heat rows in the singles - Michelle Guerette won the women's single, and Ivan Baldychev and Jen Goldsack the light men's and women's singles, respectively; so far so good for a hoped-for improvement in smaller boats.

Goldsack, who holds dual UK and US citizenship, arguably "defected" to take her chances at trials the United States this year after her chances to make the GB squad became uncertain. She certainly earned her victory today - first off, she drew the GB sculler in the heat, and then qualified for today's top performer in the bend and break dept: Goldsack showed considerable racing moxie when she was locked in a tight battle down the course with the reigning world champ Marit van Eupen of the Netherlands in her heat, At about 250m to go, with both scullers within about a seat of each other and only one to advance, van Eupen put in what looked to be her decisive push to try to get through Jen. Jen didn't flinch and kept the pressure on, and about 7-8 strokes into the move, van Eupen visibly shut it down. That's one way to race the defending champ, whew.

Meanwhile, both Guerette and Baldychev entirely avoided this kind of drama, leading their races the whole way. They did it in slight different fashion, however - Guerette dropped her rating to 26 by the end of today's heat, while Baldychev was revving it up to 42 at the close of his heat.

Other US qualifiers:
The men's double moved on to the qualifier with a workaday pull that produced a time that puts them right in the hunt. The field is headed for the quarterfinals after today, so no one has pulled out the heavy artillery; we'll see that soon enough, no doubt.

US W2- Mickelson and Johnson got it done today, if not without a couple bumpy strokes, which might be expected given how much time they spent together before today's race - yeah, that would be pretty much yesterday. They'll skip the rep as a result, and perhaps a few days in the boats will gallop them up through the ranks a bit back into medal contention condition.

On the "wrong" side of the advancement cutoff, the US men's pair did a credible job today, loading up their final 500 as they have been wont to do this summer. The women's double missed qualifying by one spot, although the top of the event looks stacked if you check the times; they'll have to have a reliable gear. In the women's double, the US crew went up against the world-beating Chinese crew and a new Romanian outfit, placing third and into the reps; I'd wait until then to make any qualitative statements about their real speed.

In the men's four, New Zealand dominated the final heat of the morning, which included both the United States and Germany. The NZ boat is coached by former US men's four coach Chris Nilsson, so it would have been hard to catch the NZ four off-guard today. The men's four looks headed for some gnarly semis and even finals; the GB crew was forced to row from behind by the French today, and took Ireland with them, topping their island neighbors by only about a half-length. GBR had the fastest time of the day at 5:57.01, but only by a half-second, and there were six crews under six minutes, and three more within a couple seconds of that.

Olaf Tufte seemed to think that winning the heat wasn't that important to him, letting Argentina's Santiago Fernandez run away with the heat after settling to 27 spm, with Tufte advancing by placing third. Did the quarterfinal gambit create better races, with so many scullers rowing sub-30 today? Not so far, but the week is far from over.

The German coxed pair made sure everyone knew the regatta was truly underway with a primal scream right on the 2' mark before the first heat. Guten Morgen boys!

The regatta course, the same course used for the 1972 Olympics, has some fairly rustic elements - the aligners house is a log cabin if there ever was one. The course is no more (and no less mind you) than a 9-lane, 2400 meter cut; one outcome of the space is that on-water warmup is pretty much limited to the 2000m row to the starting line. With the racing on minute centers, crews truly don't have the time to do a racing start in their lane - the first and last time they do any hard strokes in their lane is after the race has begun.

The Kazakhstan women's single sculler was delayed like you don't read about - it seems her plane landed in Munich 19 minutes before her race was to start, so while she was driven to the course and blitzed through credentialing, a 17-year-old boy rowed her shell up to the line, where her boat and her competition awaited her arrival. She was then driven to the starting line, but she had no race gear, so the 17-year-old changed out of his unisuit - she put it on, and she rowed to the line, and rowed her race. Thankfully the boy was wearing some boxer shorts, so he watched the rest of the racing in his skivvies! She placed last in her heat, but at least the row over the course places her in the reps, so she didn't have to scratch from the regatta. Imagine what was going through an athlete's mind in those couple intense hours, woah.

Unfortunately, the 6-minute centers really couldn't accommodate a delay and rescheduling like this, and they tried to cram the heat in between the 11:12 race and the 11:18 race. As a result, there was a great pileup in the waiting area for the next 3-4 races, and then a couple handfuls of races went off late, oof.

Subsequently, two crews showed up at the line without the required white World Rowing undershirt under their unisuits; officials insisted that they wear them, so carried shirts out to the scullers, who then put them on. One such oarsman was the Iraqi single sculler; maybe they do things like changing your clothes in the single up at Craftsbury as a fun exercise, but it shouldn't happen on the line at the World Championships. The fact is that these folks should not have been permitted to launch if they were in violation of a uniform rule; a lot of people sat on the line for a long time as a result. I'm sure the riot act will be read at the managers meeting; it's pretty certain we won't see this problem again this year.

At least one sculler didn't make it to the line today - an empty lane at Worlds is a rare site, but today the Iraqi light men's single sculler failed to make weight for his event and did not race; he is thus disqualified from the event.

Not to be outdone, a pair of identical twins are rowing the 2x for Turkey: Sami and Saim Kaya.

Finally, some local color: Marcel Hacker was at full strength today; no sooner had he backed into his lane did he start bellowing, gesturing, and throwing things, whew. It looks like he had a full pull as well, winning his heat nicely - he wasn't too tired to go up to the grandstands to sign posters for several hundred autograph seekers after the day's racing ended.

row2k will be back tomorrow for more from the Monday heats/Sunday finals event; catch you then!