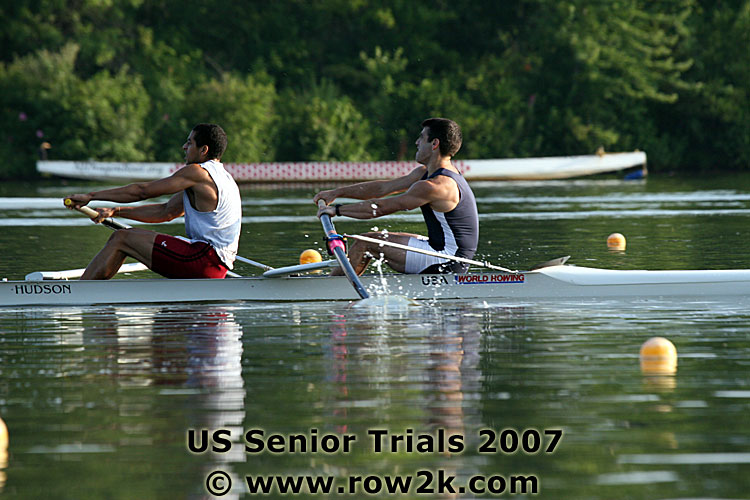 For those living lives measured by Olympic quadrennials, we're in the thick of it now; if you want to be on the 2008 Olympic team, you'll probably want to be at the 2007 World Championships. Over the next four-five days, US athletes rowing in 12 disciplines will make their bid to be in that number.

The first day of heats in a best-of-three format can provide some very interesting results, as well as some dauntingly unreliable results; with the potential for up to six races in five days in some events, some gamesmanship must by nature occur. Add to that flat conditions that turned into a straight cross, making for neutral conditions for making time standards, and it was clear that scullers and crews were sometimes making the minimum effort needed to advance to the next round of racing.

In this type of situation, it's often a fair bet that the favorites will blast to the front and hope everyone else shuts down to save energy for the reps; if that doesn't happen, all bets are off. In most cases, this is precisely how the racing proceeded; with Michelle Guerette such a clear favorite in the women's single, for example, it is almost a wonder the event needs heats. But this, of course, is why we race.

That's not to say the morning was without surprises. Atop the list we would have to put David Banks and Paul Teti winning their heat with the fastest time of the day; just a few weeks ago Banks was in his 14th month of floating around on Carnegie in the single, and Teti was in retirement from rowing and trying to stay in shape while holding down a fulltime job. Teti then filled in for an injured rower in the U23 eight for a week or two, then agreed to row with Banks a few days a week so Banks could get some time out of the single. Then last week they drove the pair over to Mercer to join in on some racing - their preparation was casual enough that they even had to swap boats on the dock to be able to use a port-stroked boat - and held their own quite nicely. So ten days later the alleged low man on the totem pole and a retired lightweight win the trials heats with the fastest time of the day, missing the time standard by only a half second; go figure! Just goes to show that both dogged, admirable persistence and plain experience go a long way in our sport.

Another surprise came from "unknown" lightweight women's sculler Jen Goldsack, who lives in Henley-on-Thames, was born in the UK, and trains at Wallingford RC, but holds dual citizenship. She and her mom traveled to the US to participate in the trial, and Goldsack ran away with the fourth heat of the light women's single in a time that was a full five seconds faster than any of the other heats. Of course it is a completely different story when all the top contenders line up across, but Goldsack definitely made an impression this morning. Goldsack and Julie Nichols, who was pushed a bit for most of her heat by Melissa Rice, both beat the time standard, the only competitors to do so this morning. Don't let the times fool you, however; Renee Hykel absolutely cruised to her win with some great sculling, and Meghan Sarbanis sent 2004 Olympic LW2x sculler Lisa Schlenker to the reps, and save for Goldsack all were within a couple seconds of one another at the 1000, so there's more to come.

When Jamie Schroeder was selected after Pan Am's to row in the Worlds men's quad, the men's single became a much more wide open affair - that is, until Ken Jurkowski came down the course, according to some observers. Rowing away from his heat with a quick time to the 1000 even while settling to around 30 beats per minute for most of the 2k, Jurkowski looked like the class of the field so far. That is, until you check the times; if the times are to be trusted, this is an extremely tight field; witness James Dietz, who, if he can match his quick time to the 1000 with a better second 1000 (he settled to around 27 with 500 to go after Gabe Winkler made a charge for the lead). The semis should be a different story.

Uniwatch: Jim Dietz senior was watching the racing, and made this observation as one of the heats of the men's single got underway: the scullers created a patriotic tableau: red on the left, white in the middle, and blue on the right - red, white and blue across the lake.

Time Standard Watch:
As noted above, only Nichols and Goldsack beat the time standards today; the complete list follows: