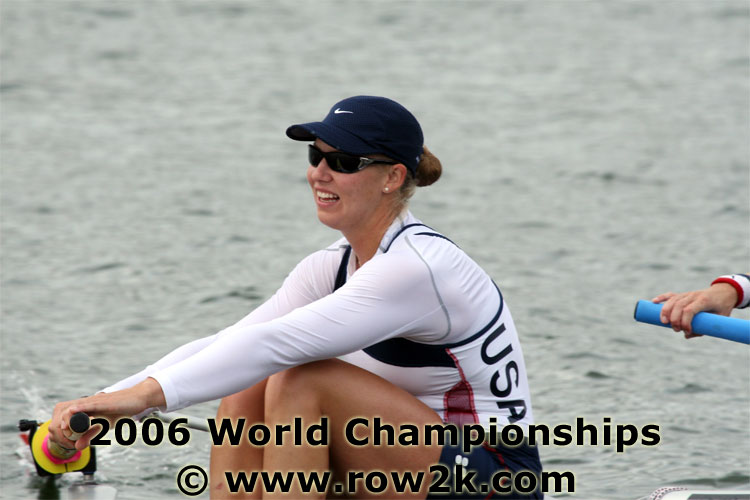 It was a good day at the Reps for US Crews

All things considered, the biggest news early today had to be the weather...it was sunny for most of the racing this morning, with a cross-tail kicking up as the racing progressed.

row2k had to check the schedule a few times to get our bearings today; it seemed like an unusually light day of work for a championships, the main reason being that only a handful of the 26 US crews in attendance were in action today, as most had progressed to the semis from their heats on Sunday. Any time you can get a rest day at worlds it's a good day.

First off, of course, we bring you all the pertinent and impertinent news from Eton.

The non-elite highlight of the day was the 500m race between all-star eights from FISA, the LOC, and the stakeboat/dock help kids. This was a pretty big deal all around, and wheels had been turning all week to get this off the ground. Folks were serious, too: FISA raced in Unis, the race was aligned, started and flagged by the book, and one of the LOC had to submit to a random drug test after the race, duly delivering a vial after the race.

The LOC and FISA lineups (handed in on standard FISA-issue boating forms) are preserved here for posterity:

For the record, the Junior crew in the event won the race (in a hull found to be 25 kilos above FISA minimum weight), by a verdict of 1/4 length over LOC, who in turn took FISA by another 1/3 of a length. FISA overcame breakage prior to the race to deliver a competent performance. For those who keep track of this stuff, this was Redgrave's first row on port since 1990.

A full slate of photos of the above engagement can be found in our worlds galleries.

Reps day is hard enough, but the LW1x from Tunisia complicated her warmup a little when she misjudged the last turn under the bridge from the warmup lane to the racecourse and flipped; that corner is a little like Weeks Bridge on the Charles, and we've seen a few crews have problems there. The Tunisian sculler, aided by course volunteers, emptied her boat, shed a few layers of clothing (which were seen drying on the bridge railing for the next few races) and dutifully headed out to the course for her race, finishing an unfortunate 4th place in a three-to-go rep.

A couple other crews that are doubling up here; the AUS W2-, gold medallists in the eight last year, is doing the W2-/W8+ double here in Eton. The crew won their heat in the eight yesterday, but was less lucky in the pairs rep today, finishing third, and will race in the B-Final on Saturday.

Another row2k reader pointed out that, when the Dutch women won two silvers at Sydney in the W2x/W8+, the Romanians doublers won two golds, in the pair and the eight.

More on the Eton racecourse: Eton College, the elite private school, is more than the nominal owner of the racecourse. In fact, according to the Eton folks, Eton "owns the land, conceived the project, financed and built the development, and operates the venue through an associated not for profit organisation."

The Brit team is delighting in playing pranks on each other during their hometown World Champs. According to one report, the GB sculler, Alan Campbell, arrived at his accomodations to find an odd plastic sheet under his bedsheets. Upon further inquiry, it turned out that one of his teammates phoned the hotel ahead of time to let the staff know that Mr. Campbell needed special accomodations for incontinence. With teammates like these...

A few readers wrote in re: yawning at the starting line. According to Kevin Alschuler, a PhD candidate in Clinical Psychology and the Director of Rowing at the Ann Arbor rowing club,

"Yawning is linked to the starting line jitters. A common aspect of anxiety is a shortness of breath and/or shallow breathing, often unrecognized by the athlete. Yawning is the body's attempt at taking a deeper breath to fix this air supply problem. While it is ok to have the pre-race butterflies (and practically unavoidable at a competition of this level), some athletes find that they are above a level that promotes optimal performance and benefit from experimenting with various anxiety-reducing techniques that bring them to a more constructive level of nervous energy."

There you have it...yawn away!

This being England, a visit from royalty is practically unavoidable. Initial plans called for Princess Anne (an Equestrian Olympian and IOC member herself) to be helicoptered in and stay for about an hour, but this being the 21st century, the word on the street is the Her Royal Highness (who is reputed to be a fan of rowing) told her people that "she would drive herself to the racecourse and stay as long as she pleased."

We've said it before in this space, but there's something pretty remarkable about having Ted Nash in your corner for racing at this level. Most folks here are pretty sure that Ted sees most, if not all races involving US crews, and during today's racing, Ted could be heard from across the racecourse above the din of a full peloton of coaches, urging crews on.

US crews in action took care of business, with all crews save the M2x moving on to their respective semis or finals today.

Jamie Schroeder had the finish of the day in his rep of the M1x, prevailing over the Lithuanian sculler to snag second place and the last spot in the A/B semis. From where row2k was, at about the 1250m mark, Jamie looked to be facing withering pressure from the Lithuanian and was near rowed-through. However, Jamie popped up the rate and threw down the fastest last 500 to get his bow over the line first. That's a pretty big step forward for a guy who seems to be still finding his groove in the single; hopefully Jamie can find another gear for the semis on Thursday.

Lisa Schlenker also got herself back into the win column and the semis with a solid row in her rep, winning fairly easily. Not sure whether this is 2003/2004 Lisa coming back just yet, but she's got the experience to get herself into the finals.

Best example of "learn as you go" today came from the US Women's Four, who were 4th at the 500, 3rd at the 1000, 2nd at the 1500 and 1st at the finish; the crew of Rachel Jeffers, Esther Lofgren, Erin Cafaro and Portia Johnson rowed the fastest last 1000 of their rep and get a shot at hardware in the final on Saturday.

Anna Mickelson and Megan Cooke in the US W2- rowed from the front in their rep today, leading wire to wire to claim a spot in the A-final. The crew now has off until Saturday, having dodged the reps in the eight, and still has the possibility of winning two medals here.

For the US M2- of Dan Beery and Sam Burns, the finish line couldn't come soon enough in their rep as the crew fought off furious challenges from the Dutch and Czech crews to advance to the semi; the crew had a bit of steering trouble late in the race and was riding the buoys as the two crews off their starboard side were pushing nuts hard to get through the US; at the finish, the margin from second through third, which both qualified, and down to fourth, which didn't, was less than 3/10s of a second.

Two US crews raced for lanes today; the M2+ of Ted Farwell, Pat Godfrey and cox Vinnie Puma got the most out of the warmup race: the crew won their race in a full field of 6 crews. Not a bad way to get some hard strokes in for practice.

The US LM8+ also took a practice run down the course, finishing 4th of 6 crews that will contest the final on Saturday.

The second round of reps takes place tomorrow.