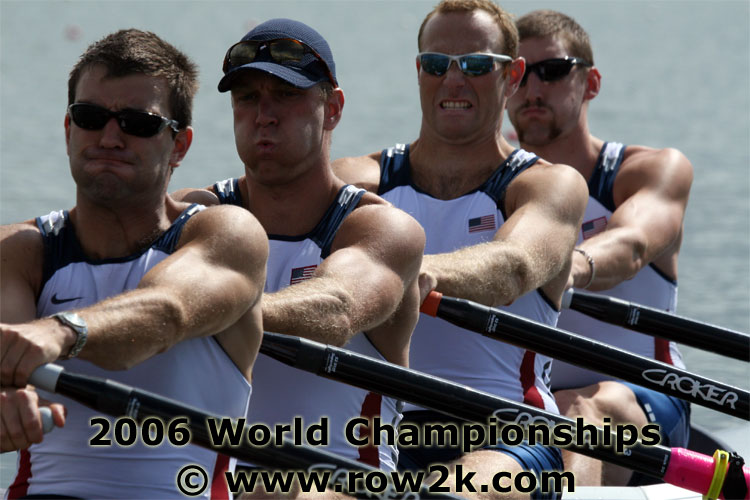 "Here's neither bush nor shrub, to bear off any weather at all, and another storm brewing; I hear it sing i' the wind: yond same black cloud, yond huge one, looks like a foul bombard that would shed his liquor." - William Shakespeare, "The Tempest"

Welcome to row2k's coverage of Monday's racing from the World Rowing Championships, where the slogan seems to be "if you don't like the weather, just wait five minutes." From sun to torrential downpours, England has given us all manner of foul bombard today.

A lot of good racing to run down today, but first, the daily effluvia/nonsense.

The visa problems that have plagued some teams entered at Worlds claimed another country yesterday, with Moldovan athletes not receiving permission to enter the country, bringing the total of affected nations up to five. FISA is justifiably upset, as there seem to be bureaucratic shortcuts available to the GB gov't that could have been taken to expedite the process, but were not.

What looms larger for FISA and for rowing in general in this process is that rowing's universality, perceived or otherwise, has HUGE implications for rowing's position within the Olympic movement. Sports currently on the Olympic program are continually evaluated as to their continued presence at the games, and one of the criteria for staying on the program is universality. FISA has put an enormous effort into universalizing the sport, especially in getting African nations involved, so this visa fiasco has to be seen as a setback. It's even more ironic that these championships are being held on the course slated to host the 2012 Olympic regatta.

Maybe they should be rowing the reps: GB M4- stroke (and Banana Spokesmodel) Andy Triggs-Hodge was spotted having an extended snog with an unnamed female under the spectator grandstands this afternoon. Commented the witness, "it was making me tired just watching."

Australian Adaptive rower Dominick Moneypenny seems to be on a mission; if he's not practicing, he's doing laps in his wheelchair on the bike path that runs around the course, we've seen him moving at full throttle every day so far; adaptive racing begins in earnest on Friday. Moneypenny won this event at Gifu last summer, so he seems ready to repeat.

Celebrity is no excuse for shirking; Sir Steven Redgrave's daughter was spotted putting in her time as a stakeboat holder in the rain today, good for her. (Though she didn't start work without incident...apparently, she was the only junior who showed up to work the regatta without a signed parental consent form!)

Coxswains are at the center of attention this week for a documentary filmmaker from Montreal, who is in town starting out on a film about the life of short men; his stated target is CAN M8+/M2+ cox Brian Price, but other jockeys, including the USA's Marcus McIlhenny, are in his sights as well.

The volunteer dock assistants have an interesting service going for crews launching/landing during practice sessions; they gather the crews shoes and other gear into a crate, label it with the crews' info, and stack these crates of gear in big blue piles just off the docks. When crews return, a spotter on the dock identifies the crew coming in, and hollers up the name of the crew to the waiting gear retrieval person, ie. "Chinese Women's Quad!", and the person at the top of the ramp then pulls the requisite crate out of the stack and runs it down to the dock just as the crew is landing. Pretty slick.

Sister Act Two: the Swedish LW2x is made up of twins Lena and Sara Karlsson. I can recall another sister combo LW2x from Sweden about a decade back, must be a Swedish thing.

If memory serves, Tomasz Kucharski and Robert Sycz of the Polish LM2x are the current "elder statesman" of the sport, having been rowing in this same combination together since 1997. A couple of world titles and two Olympic gold medals have probably made the stay worthwhile, I dunno.

Bow of the GB LW2x is the first rower row2k has spotted wearing gloves this year, but rather than being near skin-tight, these look to be bulky, almost like sledding gloves.

The FISA "uniform police" was out in full force today, cracking down hard on crews with mismatched long- and short sleeves and non-matching socks. USA W8+ cox'n Mary Whipple was a victim and was forced to do a quick change in the boat; the "Don't worry, we're not watching!" from a few of the european photogs on the pontoon could hardly have been reassuring.

On that topic, the Egpyt LW2x is rowing/racing in full hijab (Islamic head scarves), and folks around the press center have been wondering, only partially in jest, what FISA would do if they showed up to the start in non-matching gear, whew.

China has fielded what looks to be a pretty strong, large team here this year, and their crews have done well over the past two days. The preparation for Beijing are apparent, right down to athlete development across the board. The Chinese also boast the youngest rower at this years Worlds: Xuefei Fan, three-seat in the LW4x, turns sixteen this coming October.

The Swiss have entered a M8+ this year, and other than 1994, when the Swiss won the Men's Eight at Junior Worlds, I can't recall having ever seen a Swiss eight at an international regatta.

After a two days of shooting photos on the starting line, you can definitely tell when the big boats are in action; that's when it gets noisy down there. In between rowers adjusting and cox'ns giving commands and getting pointed, there's a tangible difference in feel between, say, a heat of doubles and a heat of eights. In addition, the primal screaming/psych up rituals we mentioned yesterday seem to be infectious; in the eights heats, one crew would start with the screaming, then another would counter/join in, until more or less all crews in the heat had said their piece. I'm all for anything that gets you ready to throw down, but yeesh!

On to the racing: a full slate of US crews were in action today, with both eights winning their heats as most had expected/hoped. The row of the day was the US Men's Quad, who led the Italians down the course before getting just nipped at the line by the closest margin of the day, 5/100s of a second. It's been a few years since the US had a strong crew in this event, but the US crew of Sam Stitt, Sloan Du Ross, Wyatt Allen and Matt Hughes seems poised to make a run. Three crews qualified in the heats for the M4x, so the US crew goes through despite coming second.

The Men's eight, drawn in a reasonably comfortable opening heat (Poland/Canada/Switzerland/Russia/Netherlands) nevertheless crunched down hard, putting nearly a length on the field in the first 500 and getting to the marker in the day's fastest split, 1:18.95. There are semis in the Men's eight again this year, so a full handicapping of the event will wait until later this week. The Australian M8+, who posted the fastest time out of the heats today, looks to be the class of the bunch.

The US Men's 8+ is rowing a new shell christened the "Andy Sudduth," named just a few weeks before the team left for England. It's a fitting tribute in a lot of ways; indeed, the hull is red, or, some might say, crimson.

The US Women took another strong step towards getting the most out of their doubling of the W2x and W2- into the W8+. The Women's Eight won their heat and recorded the fastest time in the event today, as doubling didn't seem to affect the crew that much. There are a few other "doubles" in play in the women's events, as the GER W2- that beat the US in the heat yesterday also sits stern pair in the GER W8+; that crew lost in a close race to the Aussies in the second heat of the W8+ today, so at least one more pair will have an extra trip down the course before the final.

The US double of rowing the W2x and W2- in the W8+ is unusual, but by no means unprecedented; the dutch succesfully doubled the W2x into the W8+ at the Sydney Olympics, winning a silver medal in both events.

Renee Hykel and Julia Nichols in the LW2x put another pillar-to-post win on the books, getting out of the blocks in a real hurry, and grabbing an outright berth in the semis in one of the deeper fields at this regatta. A quick glance at the results sheet would seem to suggest that this crew is on pace to equal or improve their silver medal from last year.

The LM2- of Rich Montgomery and Andrew Bolton similarly moved on directly to the semis; the crew recovered nicely from a start that seemed a tad shaky from where I was sitting to punch their ticket.

All other US crews that raced today are headed to the reps, that is: the LW4x, the LM2x, the LM4- and the W4x.

If the times from today's racing seem on the fast side, it's because there was a pretty solid tailwind on the course today, increasing as the racing went on. There was one official "world best time" recorded today, as the Chinese LW4x posted a 6:29.24 to put themselves in the record books.

By the end of racing, whitecaps were starting to bump down the course and few crews were out for practice, except for Germany M1x Marcel Hacker, who was pounding through the chop almost as soon as the last eight was off the water; the man seems like he's on a mission this week.

On to the reps!