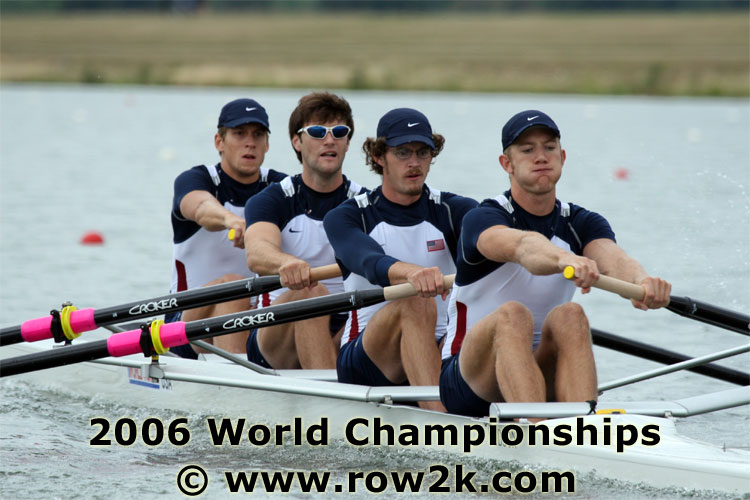 Roight, we're under way in Eton.

The AM weather for Sunday's racing was a dead ringer for late March on Lake Carnegie; pretty chilly for August, a light, steady rain, wind, and chop. The rain settled down a bit as the morning went on, but the wind remained: a variable cross tail that kicked up the water all the way down the course.

"Height of Summer," the locals call it. Of Course!

Even in the rain/cold, FISA knows no leniency: row2k saw the "identical uniform" rule enforced just once today, and it happened to be on the US W4- in the first race of the day. One of the crew had kept on her longsleeve, but FISA came down hard, and bare arms it was in the drizzle. Owwwww!

At the starting line, you see crews in very different states of readiness/anticipation: some are very serious, others loose, focussed, or even jovial (Anna Mickelson?). row2k saw several crews in each category, the aforementioned USA W2- and the China W4- were some of the crews that seemed genuinely happy and at ease with where they were; a study in contrast was the "primal scream" therapy as practiced by the German M2- on the start, to the visible amusement of Dan Beery in the USA M2- in the next lane over. A lot of yawns on the line as well...any medically-savvy readers care to explain the link between starting line jitters and yawning?

A lot of crews may sport crazy hairdos, but wacky 'dos really stand out in the small boats. Luka Spik's cornrows are pretty good, as is Marcel Hacker's new shaved dome, but Czech M1x Ondrej Synek's antler/leopard print hairstyle is the early winner.

It's also pretty easy to spot size discrepancies in the smaller boats. Most crews here seem pretty evenly matched, but the disparity in the Indonesia M2x is amazing...the crew looks like a coxed single, or a dude taking a spin with his kid brother, sheesh!

Evidence of much, if not all of the above, can be found in row2k's galleries of today's racing. (Incidentally, the rain caused a brief malfunction in the row2k camera setup, mostly for the W1x racing. We'll try to get photos of those competitors up as the racing goes on!)

Watching the singles heats, they're a pretty international bunch; how many other sporting events worldwide do you get where Armenia can line up 35 feet away from Hong Kong, Colombia, or Egpyt? And the Palestian men's lightweight 1x once again this year is Philadelphia's own Mark Gerban, looking to improve from his performance a year ago at Gifu.

Given the recent visa fiasco, you need to be careful what you say out there in an international field. Overheard at the starting line, between two photographers: "Hey, that's the Thus-and-Such single sculler over there!" "Ah, good for him; I'm going to walk over there and shoot him...oh, excuse me!"

Dada/surreal quote of the day: "May I have a piece of tape? My ears are really small!" Turns out that one of the girls manning the stakeboats was having a bit of trouble keeping her aligners headphones in place.

On to the racing: US crews acquitted themselves well today, with the Men's 4- of Matt Schnobrich, Mike Blomquist, Josh Inman and Brett Newling sticking in the piece of the day, from the North American perspective. The crew rowed in the same heat as the heavily favored GB four, and shadowed the Brits down the course, coming in just under a length behind, thus qualifying directly for the semi. The crew looked loose and very professional coming in to the starting line, and to be this close to the defending world/world cup/galaxy/home crowd favorite crew has to give the USA guys a bump of confidence.

Michelle Guerette also got herself straight into the semi in the W1x with a solid row in the heat. Michelle finished second in her heat, behind France's Henley Regatta Champ, Sophie Balmary.

The US Women's 2x of Brett Sickler and Susan Francia also avoided the rep, finishing a competent third in their heat. With both of these rowers also racing in the Women's 8+ tomorrow, skipping the rep is pretty crucial over the course of the week.

The other crew doubling into the W8+, the women's pair of Anna Mickelson and Megan Cooke, faced a murderers row in their heat today and are headed to the rep on Tuesday; lining up with the USA pair were the defending Olympic Champs from Romania, the defending World Champs from New Zealand, and the World Cup champs from Germany, with one to advance, whew. The Germans took it, with New Zealand just ahead of the US.

US Men's single sculler and sculling rookie Jamie Schroeder gave it a good go today, but will also race in the reps. Jamie looked like he caught a little bobble on the first few strokes of his start, which can't help you at Worlds; nevertheless, Jamie looked like he redoubled his efforts on the subsequent strokes and got himself back into the race.

Other US crews headed to the reps are the women's four, the Men's Pair of Beery/Burns, the Men's Double of O'Mara/Cuddy, and, perhaps a little surprisingly, Lisa Schlenker in the LW1x. Lisa was running in a qualifying position late in the race, then found herself on the wrong end of a blistering sprint by the Italian sculler. In getting a late start on competition this year, Lisa might not have the high-octane race experience from the last few months to count on, but as trials showed, she can build on every race.

Incidentally, Lisa, at 41 years of age, is the same age that the legendary Italian lightweight rower Carlo Gaddi finally retired at; winning a medal, or even making the final, would be a pretty special achievement for her.

The locals are getting into the fun here, as well. In the gap between the end of racing and the start of practice, an eight made up of stakeboat kids is hitting the course for a row; there's also the rumor of an LOC vs. FISA eights race sometime later this week.

That's it for Monday racing; we're back bright (or gloomy, as it were) and early tomorrow for the next batch of heats.