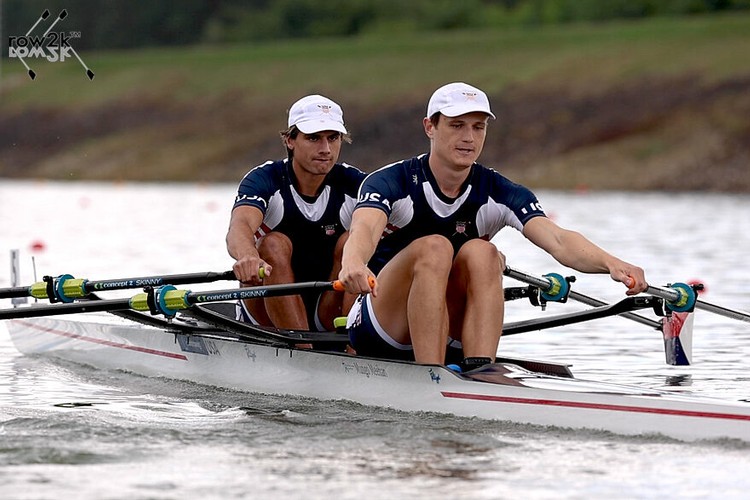 It was mostly a day full of quarterfinals, and brutal math, here in Racice, though the US team did have one Rep come down, with Andrew Mangan in the PR1 Men's Single earning a spot in his semi-final round.

Ben Davison in the single and the US Men's Double--Tom Phifer and Soren Koszyk--raced to the right side of the cut line in their Quarter-Finals, in third and second respectively. The Light Men's Double and Light Men's Singles for the US did not get past this round today, and will race C/D Semis tomorrow.

Quarters are rough stuff, no question, wherein crews can be out of medal contention midweek, and there probably was not a better visual of that than the one we saw with the Lithuanian Men's Double, who flat out stopped racing once the Czech double got into third ahead of them, and just paddled the remaining 50 meters or so.

At the same time, there is a simplicity to the progressions at this point: top three move on, bottom three don't...and the racing gets intense:

In Other News, With Other Crews 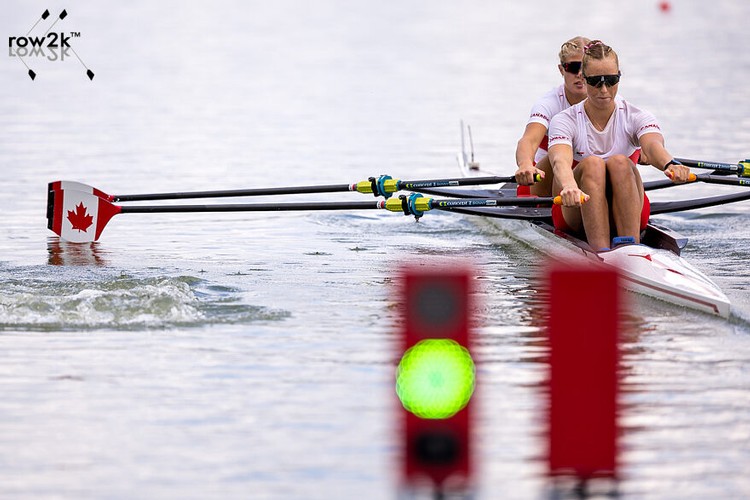 When your second international race ever becomes a second chance rep to escape the C Final, the stakes go way up, but USA PR1 sculler Andrew Mangan delivered in his second trip down the course on two fronts: by putting himself into the Semi and also by giving the crowd the first exciting finish of the day.

Mangan battled stroke for stroke with Arkadiusz Skrzypinski of Poland for pretty much the entire second half of the race. Mangan got the final inches he needed to advance right in front of the grandstand. The Uzbekistani and Japanese scullers took the first two spots. 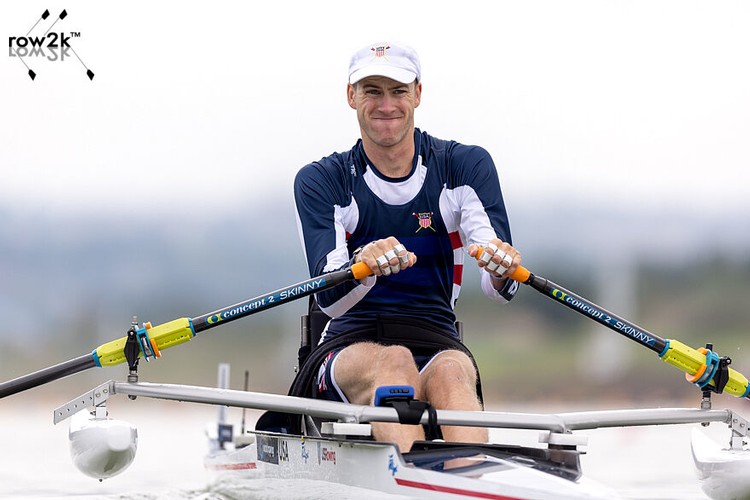 "It was definitely a fight to the end," said Mangan, "but ultimately, it worked out.

"It was a good race. Yesterday [after the heat], we had a lot that we wanted to work on, mostly getting longer, being more in control. I felt where I was at yesterday, and thought there was more out there.

"There's a lot we're learning with each race, even this one, just about the type of stroke, about getting long and where I can find length but also maintain a high rate and high power. We're going to practice again tomorrow and review the race, look over the video, and see where I can find some more speed."

Mangan's semi on Friday will feature a rematch between the Ukranian sculler, Roman Polianskyi, and the Italian sculler who beat him at the European Championship this year.

Ben Davison of the USA came through his quarterfinal with a solid, businesslike row, qualifying in third to advance. Kjetil Borch of Norway took the win today, with Japan's Ryuta Arakawa edging Davison to become what at least one keen observer thinks is the first Japanese sculler ever to make the top 12 at a World Championship. 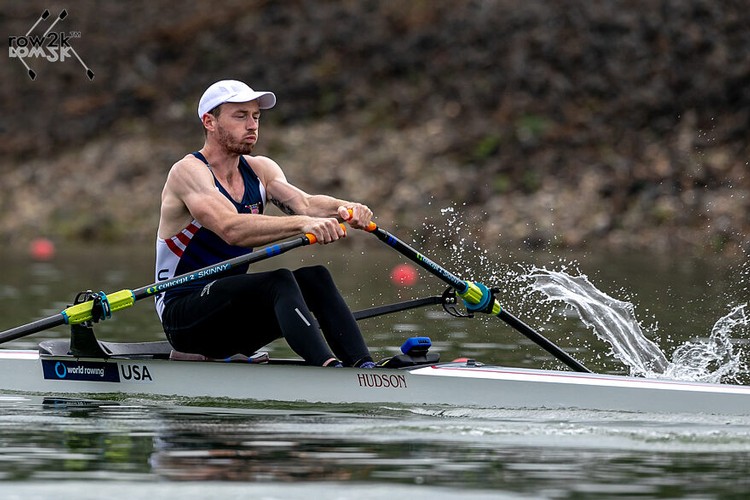 "It was good, but I don't think it was my best race," said Davison afterwards. "I was a little bit disappointed with the first thousand meters of it but then, in the end, I just needed to do enough to get through today. I played the game a little bit today.

Davison's semi on Friday will feature Britain's Graeme Thomas and the Kiwi, Jordan Parry, both of whom won their Quarters today, plus Germany's Ollie Zeidler (the 2019 Champ), Australia's Jack Cleary and Arakawa. The headliners in the other semi? The reigning European champ, Dutchman Melvin Twellaar, Olympic Champ Stefanos Ntouskos of Greece and Borch, the Tokyo silver medalist. Oh, and Twellar is, of course, also a Tokyo medalist, with his silver from the Men's Double with Stefan Broenink. 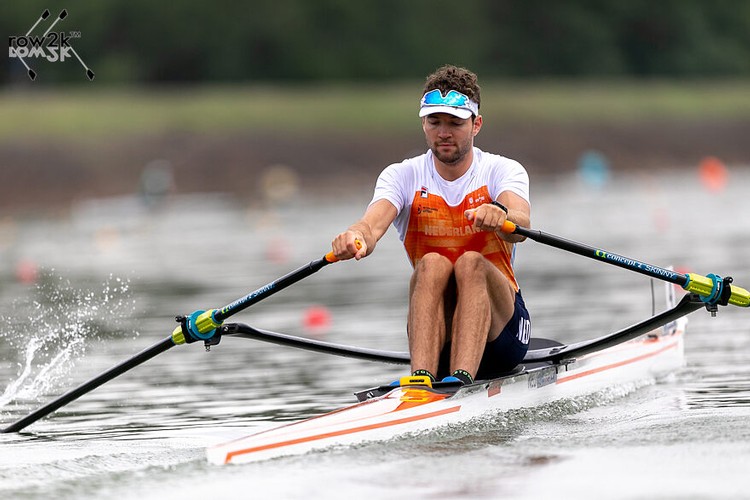 The US double of Tom Phifer and Soren Koszyk waited until just the right moment to attack in their Quarterfinal: after running just behind Norway all the way to the 1500, and understroking the field, the Americans turned up the rate, and the pressure, in the final quarter. In the closing sprint they went through both Norway, on the far side of the course, and the Irish crew next to them, who had run in second nearly the whole way. At the line, the US and Norway were in, along with winner France, and the Irish were out. 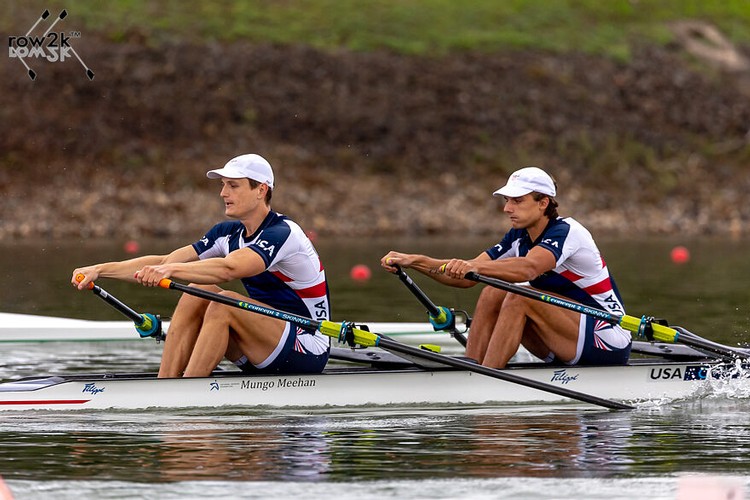 "We were definitely playing the long game there," said stroke seat Phifer.

"We knew based on previous pieces and races that we'd have a little bit of a slower start than the field, and we planned the race that way, to have an even split race. We knew we had the fitness and we trusted our speed all the way through.

"By two minutes left, we could feel we were in contention. I was feeling pretty good, so, with 500 to go, I just went for it: kept the rate up and sprinted."

It fell to bow man Koszyk to keep Phifer posted on where they were, and needed to be to qualify.

"I was looking around a lot," he said. "When you're in the middle of it, it's pretty emotional, so I would just take a look, and I could see that we were coming back a little bit. We have a pretty even paced race profile, and we started inching back so I was telling Tom, 'Yeah, good, we're coming back, keep on it.' I knew we just needed to run the whole piece. In the last 500, we were pretty close to the Norwegians and the Irish and I said, 'Alright, time to go.'"

Koszyk added: "I think a lot of the confidence in the middle of our race just comes from doing so many training pieces with the Women's Eight and Men's Four, and the prognostic times. Knowing where we stack up with them, that we're in the mix, tells us we have speed across the whole distance."

Phifer and Koszyk pairing came together during the second round of selection, a camp Phifer earned his spot at by winning the Men's Single at the US Summer Nationals. The two had rowed a double briefly at Penn AC in the summer of 2021, before Koszyk moved out to Oakland to train with the California Rowing Club.

Phifer said that first incarnation of their double "had good potential."

"It was it was little rough around the edges, but we knew it had a good foundation and then we were both at selection camp this year."

"There was like definitely good speed last summer," said Koszyk, "but it wasn't quite at the next level. I think having another year of training under our belts got the physiology a little bit better and now our skills are a little bit sharper, and it just worked out."

Up next, a semi with the speedy Australian and Spanish doubles, plus Italy, Moldova, and the Czech Republic. Croatia's Sinkovic brothers will race the other semi, and have looked on form and ready to "repeat" as the doubles champs all week. 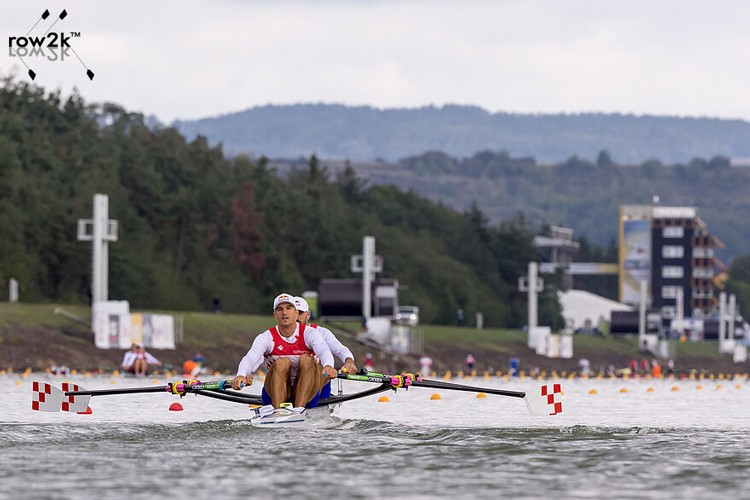 Zach Heese and Jasper Liu also raced in a three-boat pack for two spots on offer behind the Irish Olympic Champs, but they fell on the wrong side of the break in the closing stages. Both France and Spain had just enough in hand to hold off the game charge from what has been a very competitive American boat. They will raced a C/D Semi tomorrow. 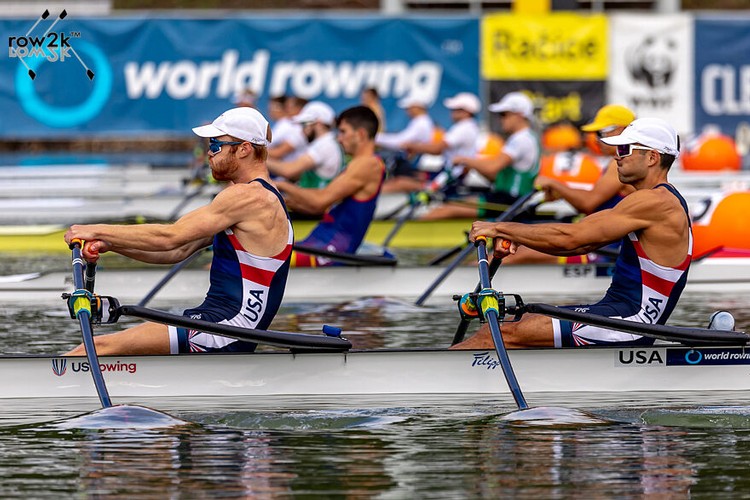 Being competitive in this event, though, is merely a starting point: the Light Men's Single continues to be one of the tightest events at Worlds, despite--or maybe because of--its impending demise at the Olympic level after Paris 2024.

This is true all the way down to the quarterfinals. The margins today in the four races between first and the crews that came fourth and missed out? 2.2 seconds, 3.4 seconds, 4.0 seconds, and 2.8 seconds. When you are within four seconds of the Olympic Champions, you are a fast crew; when that four seconds means you are out of the top 12, as the Americans were? Then that is a tough event.

Jimmy McCullough, as we covered on Monday, made some good adjustments to get more aggressive with his base pace, and he ran for a good while in a pack with Bulgaria and Ireland for what could have been the final transfer spot. Italy's Gabriel Soares, the silver medalist from Europeans and Monaco's Sid Ali Boudina, had gotten away early and, in the end, Bulgaria's Lazar Penev got away to move on.

Worlds Thursday will be the last day without medal finals, and it is a long one: 40 races--which is a lot for a Worlds program--starting with A/B Semis in the light singles, the pairs, the light doubles, the fours, and the quads. The afternoon will run through the C/D semis for the events in the group that need them, and the day ends with the E and F Finals for the Men's Single, which had 40 entries. 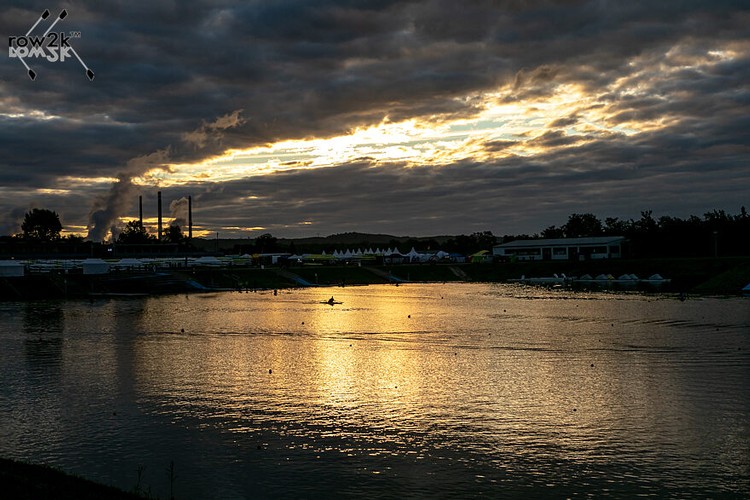 Better Watch Out, Mahe: We spotted Ondrej Synek heading out for practice today, getting set for his "farewell 500" race against Mahe Drysdale and company. Looks like at least one of these legends is taking this 500 seriously.

Speaking of Made for Aligning: We made mention of Georg Gruentzner, the official who spent his early career as a surveyor, but long-time World and US Rowing referee (and loyal row2k reader) Jon Wylder wrote in to remind us that he may well "hold the most unique qualification as an aligner at the Olympics or a World Championship - I am blind in one eye!"

Starter goes to 11: The volume at the start went up, way up, just before the Women's Double's reps, startling some of the photogs on the start pontoon almost out of their boots.