Ed Hewitt
Ed Hewitt is the publisher of row2k.com

Rares Crisan
Crisan is a member of the Canadian LM4-

Safely in Bled, Rigger and All

My Work of Arts & Crafts

Stone racing her heat in Bled

On Sunday (the day of my heat), I went down to the course, did my pre-race jog, stretched, etc. Ready to go, pick up my boat, my Dad has the oars, get about three feet from the officials. Then, I realize that we never got around to tying down my heels. I yell to my Dad, and flip the boat down to waist level so that he can tie them down. My Dad approaches then finally realizes why I stopped and flipped the boat down. He attempts to get hold of the laces, but dexterity is not his strength. He's fumbling around when the official approaches. The official (fortunately!) is a Brit in a good mood. After realizing what we're doing, he doesn't criticize us for waiting til the last minute or for our lack of safety concern. Instead, he offers to help hold the boat or to help with the laces. The area in my hull around the heels is a little small for the heels, so we politely decline his offer. He continues to stand by for support. My Dad is still struggling, and I'm getting frustrated with the fact that he's taking so long and I'm going to be on the water later than I ideally wanted. I nip at my Dad, and right after, the official asks "Did I hear you call him Dad?" I confirm, and he gets a big kick out of the whole situation. Even makes a joke about staying out of it now that he knows it's a family argument :) Anyway, we finally get the laces tied, and the official cheerfully looks on at my Dad's successful handiwork.

The great service at the docks doesn't end there. When launching, a little boy grabbed my crocs as soon as I slipped them off to get into the boat. I was slightly concerned because my Dad usually places them on the landing dock where I can get them after practicing/racing, but not too worried as I figured they were probably going into a big pile and my blue crocs are easy shoes to spot. Well, I had other things to worry about...the race! And forgot about my shoes until landing. Right upon coming alongside the landing dock after my race, another little boy appeared and placed my shoes right beside me before I had the chance to step out of the boat. I felt very pampered!

PostCancel
There are no Comments yet
hide comments
Safely in Bled, Rigger and All
posted by: Gevvie Stone (August 25, 2011)

My rigger and I have made it safely to Bled on Monday morning after a red-eye to Munich, a decent layover, and a short hopper flight to LJU. From the looks of it, airport security paid attention to my new fragile tags—the straps which I had tied together for more convenient carrying were still tied when I picked up the rigger from its resting place outside oversized baggage.

Being in Bled is spectacular. Megan Kalmoe has done a great job of describing the water, the hills, and the forest views, and I won’t bore you by repeating it. I will add that there is also magnificent architecture scattered along the course. At 250m, the white steeple of the local church rises high above the trees at the water’s edge. Then, on top of a sharp cliff face at about the 500m mark, a large white castle with a bright red roof towers above the rowers. Lastly, at 500m to go, Lake Bled’s island houses a wooden church, partially hidden by the trees sheltering it. Its bells ring the time throughout practice.

The course itself is a wonderfully wide nine lanes. FISA designates different boat classes to different lanes for practice with the slower boats nearer the center and the eights and quads in the outside lanes. Having four lanes in each direction makes life as a single much easier because there is less risk of a fast double charging up the lane behind me. And, if a double does choose to use one of the slower boat lanes, there is room for me to move one lane over.

More teams (Canadians, Germans and GB) arrived yesterday (Wednesday) evening, and things will continue to get more crowded during practice. Luckily, the temperature is supposed to cool down, allowing a wider range of rowable hours during the day. The past two days, it has been so hot (95F yesterday) that most teams choose to avoid rowing in the middle of the day.

I had the morning off today so got to put on real clothes (a sundress!) and take my time eating crepes at breakfast. However, I don’t feel too relaxed as I am doing pieces this afternoon and then tomorrow will do my final speed work before racing.  The start of the regatta is quickly approaching, and the draw comes out tomorrow!

PostCancel
There are no Comments yet
hide comments
My Work of Arts & Crafts
posted by: Gevvie Stone (August 20, 2011) 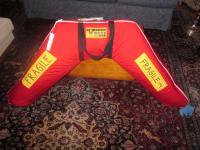 I row a VanDusen single, which turns out to be a blessing and a curse. A blessing because I like rowing the boat and because I think it's the fastest boat for me out there. A curse because there aren't too many of them in Europe. And by aren't too many, I think there are three. Total.

Luckily, I happen to know the owners of these boats, and Anne Marden Grainger has been kind enough to lend me her boat for the summer. (The Van Dusen community is relatively small, and, as far as I can tell, it consists mostly of New England masters rowers.) The only minor detail is that her boat has an aluminum wing rigger, and I row with a carbon fiber wing, which means I fly trans-Atlantic with my rigger in the checked luggage. I wish it fit in the overhead bins so I could keep an eye on it.

On my most recent overseas trip (this past June/July to Henley and World Cup 3), I had carefully wrapped my rigger in layers and layers of bubble wrap as I had on my previous adventures, but security was suspicious and on both trans-Atlantic flights, they cut through the bubble wrap thus exposing the delicate carbon fiber of my rigger. I have two slight cracks to prove the trauma my wing has been through. Fortunately, they are not in load bearing areas.

This trip, I knew I needed a new solution. Something that would protect my wing while allowing security to see what was inside the bag. My first thought was a guitar case-like object--hard, durable, form fitting with soft felt on the inside. Surprisingly, no one makes hard wing cases! I guess most people don't travel in airplanes with their riggers. I went to Plan B: design and build my own wing protection that would fit inside my current bag.

I began with two dense foam sleeping mats made for camping, one three-inch foam egg crate for hospital beds, scissors, a big needle, string, and a lot of packing tape. I cut the pieces, and, while attaching them, I had to switch from packing tape to duct tape. Packing tape doesn't curve well and couldn't take the corners while sticking to the foam. Duct tape made my life a lot easier. Then, I sewed the dense foam outer layer to the thick, squishy inner layer. A few hours later (scattered over a few days), I have a wing-rigger shaped foam nest that fits snuggly inside my rigger bag. Importantly (and what my parents were worried about seeing the layers and layers of foam), the rigger fits inside the foam inside the bag.

The final touches are some big, bright yellow, home-drawn "FRAGILE" tags that I sewed to the outside of the bag. I even included some stick figure images of a rowing shell and what a rigger is just in case my "Sports Equipment: Rowing" memo doesn't clear things up.

Now, all I can do is hope security doesn't find my duck-taped creation suspicious and cross my fingers that my rigger gets to Bled in one uncracked piece. I fly out Sunday night.

PostCancel
There are no Comments yet
hide comments
FOLLOW US