Ed Hewitt
Ed Hewitt is the publisher of row2k.com

Rares Crisan
Crisan is a member of the Canadian LM4-

back to Blogs home
First Impressions: Is that buoy wearing goggles?
posted by: Kristin Hedstrom (August 22, 2011) 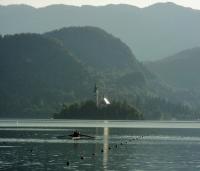 Here we are in Bled!  Well, some of us.  I was part of the first US group to arrive here, so I can tell you it’s gorgeous.  Lake Bled has clean, flat water, an island with an ancient church in the middle, a castle on top of stunning cliffs near the starting line, and massive mountains as the backdrop to all of it.  I am sure row2k will have no shortage of amazing Worlds photos with these surroundings (but do they ever disappoint?).

But hold on, let’s rewind a little.  We arrived at the hotel yesterday morning after three flights and a trip on a mini-bus.  As we reunited with some of our US teammates, I realized that everyone had a story about their trip over.  Big storms rolled up the east coast on Friday evening, so more than a few US team members had delayed and cancelled flights.  Julie, my LW2x partner, and I were feeling great about our trip over when our pilot told us that we were one of the last flights out of Newark before the massive delays began…and we kept feeling great until about the moment in the Munich airport when we were told we didn’t have tickets for the last leg of our trip (to Ljubljana, Slovenia’s capital).  I think that was also the moment that we stood there wide-eyed and said in unison, “uhh, what?” Our itineraries showed that we were on the next flight, but the Munich ticket agents weren’t having any of it.  And the plane was leaving in thirty minutes. Can’t have a trip without a story.  After several tense moments and many phone calls, we had tickets in hand and sprinted to the gate (yup, we were those people: disheveled, backpacks bouncing back and forth as we ran through the airport – but at least we had tickets).  We made it on the flight, but I was definitely convinced for a few minutes there that we’d have to figure out a Plan B.

So now we’re here.  Julie and I were in Europe for nearly two months earlier this summer for the World Cups so being back doesn’t feel like a huge adjustment.  The first day or two are always a little tough with overcoming jet-lag, getting our bearings, and figuring out our routine, but things have been going well.  We’ve been out for a few rows and the water is great.  We’re one of the first teams here, so the course isn’t too crowded yet.

While walking back to the hotel on the lakeside path this afternoon, Julie and I remarked that the Europeans really know how to live.  There were so many people out walking, running, biking, sunbathing, swimming, and playing games near the lake.  The only problem is that swimmers come way out into the lake and it’s easy to mistake their heads for buoys….not a mistake you want to make.  There have already been several close calls, despite the siren that an official at the finish line blares when rowers get too close to swimmers (or is it the other way around?).

We’re excited for the rest of Team USA to arrive.  Right now there are only about thirty of us here, the rest being in Munich for a pre-Worlds training camp or on their way in from the US. We’re still a week out from the start of racing, but the excitement is building daily.  Go USA!

PostCancel
There are no Comments yet
hide comments
FOLLOW US