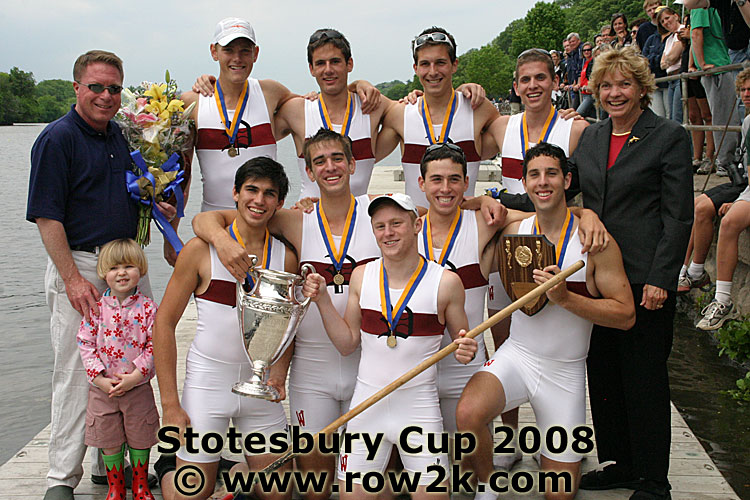 It's been only a bit over a decade since St. Joseph's Prep boys crew had a day like today at the Stotesbury; that was the last time the squad swept all the men's eights events at the oldest schoolboy regatta in America.

Is this the best Stotes St. Joe's has ever had, head coach Bill Lamb was asked as he climbed down the stairs onto the dock with his daughter Lizzie in his arms to greet the varsity eight, the fifth Prep eight of the day to take gold. "1997," he was quick to answer. "1997 was the last time we had a day like today. We swept all the eights that year - there were six eights then with the midweight eight - that was our best before today."

The boy's varsity eight was technically undefeated going into the final - I say technically because Winter Park had topped them against the clock yesterday in the head race time trial. A couple hours before the race was run, Lamb was looking at the firm headwind on the water and thinking it might contain the bit of luck any winning crew needs. "Winter Park rows really well, but we might be a little stronger, and into this wind I'm hoping we can find a little advantage," he said at the time.

By 5:30, the wind was starting to abate, but not so much that things turned against the crew. "The longer the race went, I hoped that was better for us," Lamb said after the race. "I was at the 800 meter mark, and we were up by about two seats. In the second half of the race, I think they just steadily pulled away. There wasn't a big burst, but it was enough by the end." Winter Park followed less than a length behind for the silver, with St. Augustine taking their first-ever medal in the V8 with the bronze.

The experience in the crew didn't hurt; the crew is made up entirely of seniors. The program can find some solace in the performance of their lower and younger boats as well, who won the second eight, the junior eight, the lightweight eight, and the freshman eight.

In the women's eight, Bishop Eustace repeated this year as the Stotesbury champions, an impressive feat for such a young program. After the race, Eustace coach Eric Somershoe said that the coaches had been a little worried about the headwind. "We had a bad race in the headwind at the New Jersey State champs, so we weren't sure how it would go," he said. "But the wind went down a little bit at the end of the day, and they got out to a good lead in the first 500 meters, which helped them row away from the field." By the finish line, there was a patch of open water back to silver medalists Mount St. Joseph, who were able to keep bronze medalist Holy Spirit at bay in the last few hundred meters of the race.

The girls senior four was an all New Jersey affair once it got to the medals dock; Peddie took the gold to extend their current streak to a threepeat, while Ocean City repeated as silver medalists in the same event. Blair Academy made it three Jersey crews in taking the bronze.

Meanwhile, Blair took top honors in the boys four, the program's first Stotes gold to date. "It was wild in the middle of the race," recalled stroke and sole senior Matt Galliva. "The headwind got really strong, and it was pretty tough, so at the end we had to do a 40-stroke sprint to win it. It's our first gold ever, and it's great with the girls medaling too." Coach Bowen Posner was not surprised by the outcome, although the crew may have been slow coming around. "I'm not sure they thought they could pull it off until after the time trial, where they won by a significant margin," he said. "After that, I think they felt like they could do it."

It turned out that the squads got to share the medals dock; the boys raced first, so as they were collecting their gold medals, as the first of the medalists from their event called to the medals dock, the girls arrived at the dock to collect their bronze medals.

In the boy's single, Shaker crew sculler Austin Meyer finally bagged the gold after a couple trips to the medal stand over the past couple years, but no top honors. The 150 lb Meyer wasn't entirely happy with the headwind, but it didn't matter in the end. "I was a little worried about the wind, but I just tried to lay back into it," he said. "At 150 lbs, you just have to do it. It's great finally to win it."

In the boy's quad, perennial sculling powers Malvern bested the field by over five seconds after a very shaky start. "We had a rough start, and were down about a length coming through the first bridge," said 2-seat Mike Rawlins, who is headed to Columbia next fall. "At the 1000 we made a good push, and were able to keep grinding it out until we had the lead by the finish line."

A big margin as the finish line approached almost eluded the Denis Morris girls quad when at least two of the crew members stopped rowing briefly with about 10-15 strokes to go. They recovered in time to keep the lead ahead of Episcopal and Conestoga. It had looked like the stroke seat had stopped rowing completely, but when asked what happened on the medals dock, the three-seat was quick to confess. "Oh you mean the crab? That was me!" Not one to let her crewmate hang, the two-seat chimed in - "I crabbed too - we still made it here though!"

In the light men's double, the Fort brothers from Ransom Everglades in Miami made up some 35 seconds through the ranks in a year's time; last year the double placed sixth, 25 seconds out of first; this year they won by just over 10 seconds. At 137 lbs each they are legit lightweights for certain, and young, too; the stroke is a sophomore.

Other notes: Egg Harbor Township won their first-ever Stotes gold in the girls light four. "They have been getting a little better each week, and have really worked hard for it," said coach Dan Welsh. "There are four seniors in the boat, and this is really the culmination of 3-4 years of steady effort, and they got their first Stotesbury Championship."

Finally, referee Bob Suter Sr. provided a brief but entertaining diversion to spectators waiting for the next race to come down when his leap from a launch to the dock fell a little short (in his defense, the docks were moving targets). Bob was a great sport, and shook it off and laughed it off in equal portions. We'll be sure to post the evidence when the galleries post, and will blame the other refs who insisted we post a photo if anyone asks! Suter wasn't alone, either; a stray eight clipped a boat on Friday morning, and the ref was hit by the two oar, the four oar, and the six oar while keeping his legs, if a little more wobbly with each one; finally the stroke oar took him out and into the drink. All in good fun guys; we all know that without you we can't run regattas, so thanks for the labor and the light moments alike.

Looking ahead: Many of the crews will meet again next weekend at the Scholastic Nationals, as well as a few weekends later at the Youth Nationals (which occurs on Father's Day weekend - row2k will be on fumes by then - if we're not already!). Coaches and athletes were already psyching themselves up for another shot at the podium; tremendous luck to all as the championship season continues on.