The NZ M8+ drives for the line

After the racing we spoke to Bond, Murray, and Bosworth after the racing about how the eight came together, qualifying at the FOQR in June and quarantining solo in hotel rooms when they arrived back in New Zealand, switching from the pair to the eight, who sits where, and more.

Interviewer: You guys did it! How does that feel?

Sam Bosworth: Words can't really describe the feeling right now. We crossed the line, and I couldn't quite believe it that we had done it. I'm hugely proud of our guys for the whole year. To get here, we've gone through a lot of hurdles and ticked it off.

row2k: You guys want to talk about these hurdles? You go to Europe to qualify the boat, then you go back home and live in a hotel for two weeks. There are some fairly extreme things going on.

Hamish Bond: If you look at the whole world and what people have overcome in the last 18 months, two years, our hurdles were pretty small, but I guess in our microcosm of high-performance sport where we're all a little bit precious at times, I would say we were all pretty annoyed that we had to go fly to Switzerland and qualify at 'last chance;' then given the state of the pandemic and how that was going to affect us coming from New Zealand, having to do two weeks' quarantine in a hotel - complete isolation, training on ergs - if you put that in your script for Olympic preparation, it wouldn't have been your first choice.

But the way that the guys mentally stepped up, we really just took it step by step, day by day. Do what we can on a given day, and you live and die by that daily approach. For it to have come off, I think we just slowly started to dare to believe over this week. 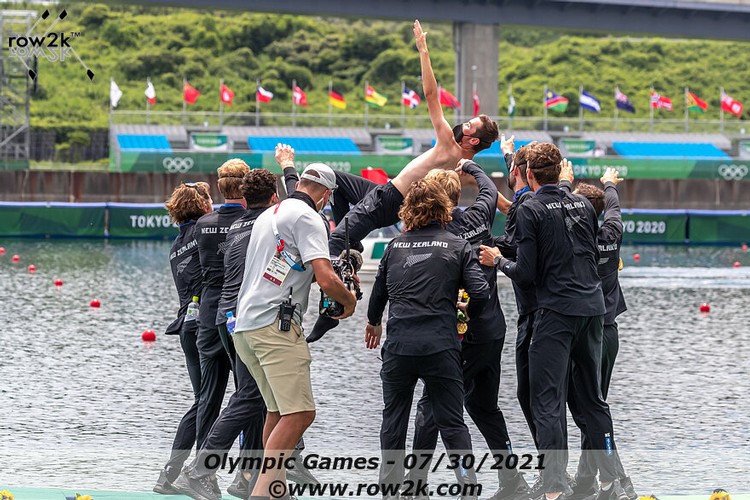 Coxswain Sam Bosworth gets the toss

row2k: Hamish, you're an old hand here. These are your fourth games. Talk about how you work with some of these younger guys and how that cooperation and that partnership worked.

Bond: I could see the raw potential when I came in. You look at some of these guys, our young guys that are six-foot-six, they can throw down on the erg. Really, I saw it; I looked at it man for man, and I thought, "We have a better crew than I think other countries can put out - man for man." I truly believed that the whole way through. I never lost that belief, but I guess the thing about an eight is it doesn't really matter what you do as individuals. It's how you can collectively harness the potential.

To have Mike and Tom (Mike Brake and Tom Murray, who had been in the pair) sacrifice what they've done in the last two years in the pair, silver medalist last year, to come into the eight, and to buy in - that took a lot of selflessness.

It was always my mission just to turn up and get back to my best, first and foremost, but to set expectations on them, and the way that, overall, they weren't intimidated by that at all. They were like, "All right then, old man. I'll show you," and I think every one of the eight had their moment where they were the champ. They were the one who showed the other seven guys that they deserve an Olympic gold medal. Everyone had that moment throughout the 12 months. Then for everyone to show up in a pressure cooker situation like an Olympic final just shows huge mental strength.

row2k: Do you recall any of these moments that he's talking about?

Murray: Yeah, Mike and I were really proud to be able to get in the pair after what Hamish and Eric had done over the years. When Hamish approached me to try and get both Mike and I to commit to the eight, it took a while and a fair bit of talking.

I was in the eight in 2016 in Rio, and we didn't quite do what we thought we could, so there was that feeling of unfinished business in the eight, and there's something about a group of lively guys just really wanting to attack it every day. That eventually won both of us over, and we couldn't be more happy that we made that decision.

Even though nine of us got medals today, there's a way bigger team that deserves medals around us - our support staff that are with us every day, coaches, reserves. Shoutout to the MVP, Ian Seymour, who wasn't selected and then just stuck around. Every day, he was there for us, filling in spots. I've never even heard of somebody that selfless. What he gave to this crew, we wouldn't be here without him.

The support from our sponsors and everybody. The team is huge. To only give out nine medals is just not quite right, but we'll get to the team and sort of share our gratitude around. 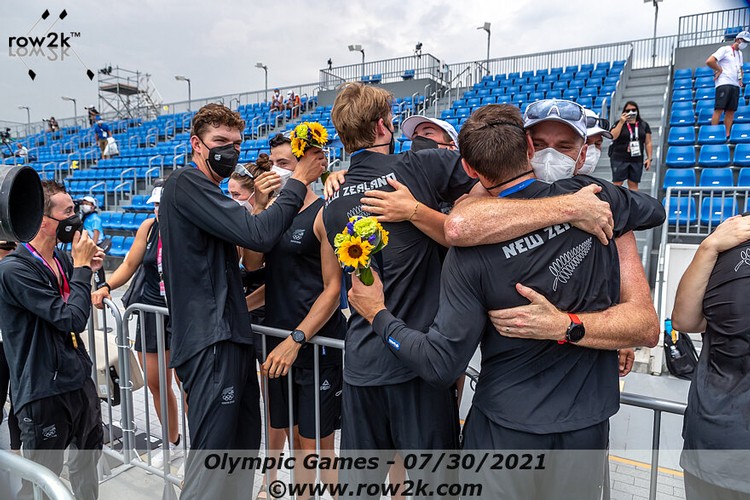 row2k: You guys are pairs guys. You're used to looking off the stern and there's nobody there, and now there's a coxswain here, and you've got this whole crew. How was that, going from pair to eight?

Bond: To be honest, when I came into doing the eight, I just thought, "Look, I know how to row. I'll try and teach these guys to row how Eric and I rowed, and that should work," and I was wrong - really wrong.

It took me a long time to... I knew it wasn't working as I wanted it to, but like I said, I knew that raw potential was there, we just had to figure it out. It took even some of the guys who had experience from these guys winning Under 23 eights medals back in the day to help finally learn how to row an eight. It was different.

I think every one of us tried just about every single seat in the boat, and I think we found our right mix. I mean, I thought I'd just be stroke, but that did not work (all three laugh); that lasted a few weeks and it was not good, so I'm quite happy up in the bow, looking at everyone else, and just that feeling of power of eight collective units.

The eight is the blue-riband event, and it's that way for a reason - feeling that power of eight people harnessing their physical potential for a collective good. You know, that's the pinnacle of the sport.

Interviewer: Do you think this will finally put all the talk about '72 to bed?

row2k: In the coxswain's seat, you come through the rep, and then you guys are out front in the final. How did you assess that as you went down the course?

Bosworth: We finished that heat, and we weren't happy with our performance; we knew that we could do better. So we utilized our training days, went out there, and focused on some really simple things. It worked in the rep, and then we just went out there today and we trusted it. And we've proved that worked again.

For me, the way we were rowing, it was long and strong. It didn't feel hectic in my seat. You know, it was a comfortable ride, and the boys were rowing really well and responded to everything that I said.

row2k: Hamish, the Sinkovic brothers yesterday spotted you guys as the better pair. Were you tracking their pair? What did you think of what they had to say about you - sort of this rivalry that never met up? Maybe Tom you can comment as well.

Bond: I massively respect what they've done - to go from the double into the pair. I know a lot of people wanted to see Eric and I take them on, but the timing obviously wasn't quite there in terms of our careers. What they've achieved... they're great athletes but, more than that, they're great people, and I've really enjoyed seeing what they've done.

They were the first to congratulate us on our success, and likewise. Whatever they can do in the future, they've been great role models for the sport. I'm really pleased that they've managed to pull off what they did dream to achieve as brothers. It's pretty unique.

row2k: (to Murray): Do you miss having a go with them here?

Murray: Mike and I always looked forward to getting ourselves out there and testing ourselves against them. We learned a lot from how they raced, and how that made us change how we approach the race, and we've managed to take parts of that into the eight, and I feel like that made a bit of a difference.

You learn a lot from who you row with and who you row against, and those guys are just absolute class in the pair and in the double. I'm super stoked for them to be able to pull off what they went out there to achieve and the domination they had in the last few years leading up to this event.

row2k: Hamish, he asked them who was the better pair, and they didn't hesitate. It was instant. Do you guys take that?

But really there's no need. Fortunately, in rowing there's enough events that we can have multiple champions, and each person has their own story to tell, and their own legacy, and they've written their own story and it's been a great thing to watch. 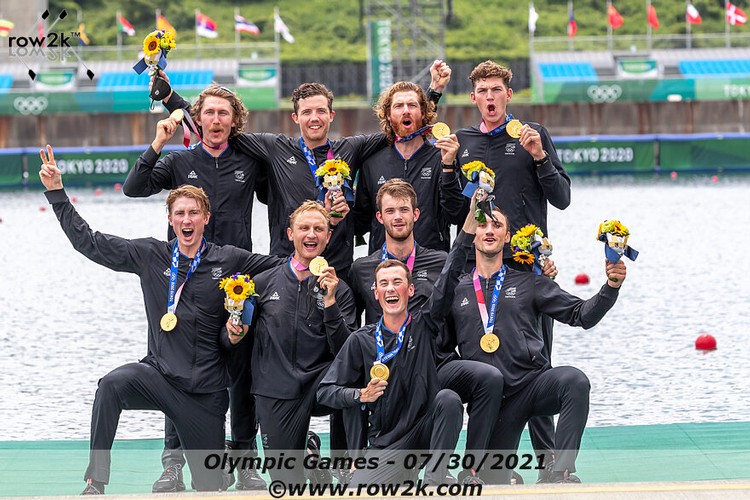