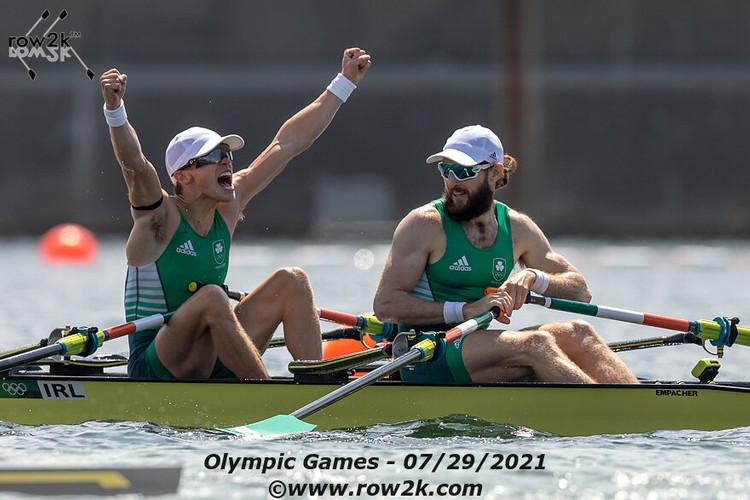 After the final of the Men's Lightweight Double, row2k caught up with the Irish combination of Paul O'Donovan and Fintan McCarthy to ask about the highly unusual oar handle gripping style that dozens of alert row2k readers and viewers have noticed during the regatta.

row2k: Congrats guys. Starting right off with a hardcore rowing question that we've been bombarded with from the United States, tell us about the way you grip the oars. There's a good two or three centimeters off the end - your thumbs are off. Tell us a little bit about the technical aspect of that.

Paul O'Donovan: I know it's a very technical thing, the coach doesn't like it one bit whatsoever and he's always giving out to me about it but I just say, "Oh, I have a habit and it slides down by its own."

row2k: Your hands are sitting on the adjustment screws?

O'Donovan: I'm not quite on it, just a bit above it, I'd say. I try and hold it up sometimes. It doesn't work out, so I started ignoring the coach then eventually because I was just happier doing it.

row2k: What's the difference in feel? Do you feel like you have to run the inboard in longer, so you get the proper leverage?

O'Donovan: Probably a bit, yeah, because the oars would be set light anyway. We like kind of light oars, and keep the rate high, like. It feels easier for me to keep them down low. 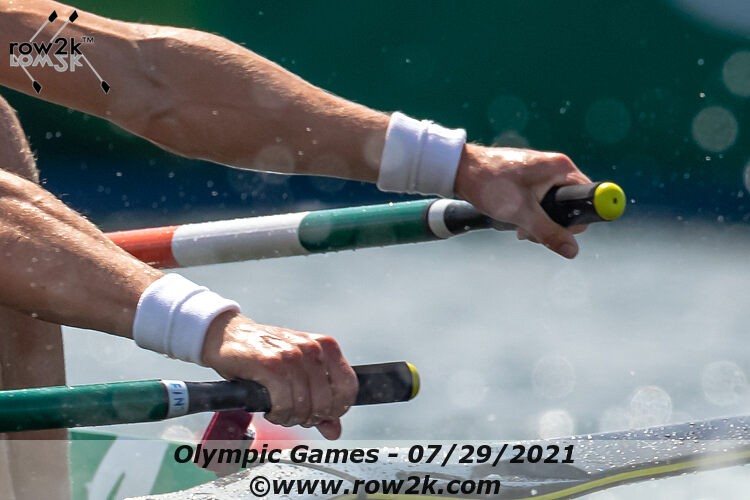 row2k: It's not a technical?

O'Donovan: No, I just like doing it, yeah. It feels nice.

row2k: Fintan, you do it as well. Are you copying him?

O'Donovan: I bully him into doing it, basically, I feel like, 'it feels good for me, so you better start doing it.' I don't give him a choice in the matter.

Fintan McCarthy: Yeah. To be honest, at the end, I'm just trying to keep the handle in my hand, so I just get a good grip of it, you know.

Interviewer: Can you talk a little bit about what you accomplished here today? How you feel about it? I mean, you've been after this gold for a long time - since Rio.

O'Donovan: To be honest, we try, like, you don't feel much about or think about it. People are asking, "Has it sank in yet?" but I don't think they ever do, really. There's a ceiling on how well you can feel unhappy in this type of thing. Sure, we try and be happy about the place all the time, so winning would give you a bit of a boost. All right, for sure, but we're not going to explode with excitement and happiness after it, you know.

Interviewer: How are you guys going to celebrate the first ever gold for Ireland in rowing?

McCarthy: Well, we'll have a trip to the dining hall first anyway. We've been having to weigh in all week, so it would be nice to go there and not have to keep an eye on what we're eating.

O'Donovan: Fintan has been eyeing up the brownies here all week.

McCarthy: Yeah, the pizza as well.

Interviewer: What about after that though? Celebrations after the dining hall?

O'Donovan: I'd say there's not much celebrating out to do in Japan, to be honest. We'll have to be careful with the COVID, you know, unfortunately. Otherwise, we'd go all out together - massive parties. We'd probably knock down the apartment. Fortunately for the Japanese and our neighbors, that won't be happening this year.

Interviewer: How did it feel on the podium during the anthem?

O'Donovan: Oh. It was good. There was a great tune to it. I was very hot and tired and stuff after the race. I couldn't concentrate at all. I could barely get the words out of myself, unfortunately. You get the tune all the same, and it's nice. You see the flag being raised there which is beautiful. 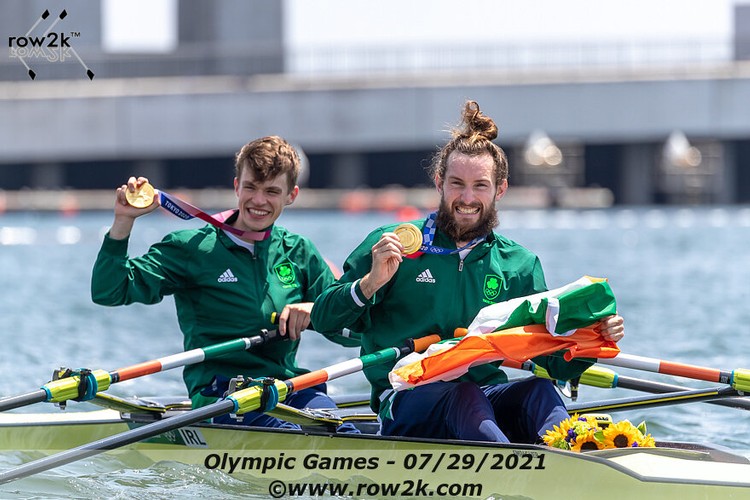 Interviewer: What does it mean to you guys to win for Ireland and to represent your country this whole week in general and the Olympic atmosphere?

McCarthy: It's good. They really get behind the Olympics at home, don't they?

O'Donovan: Yeah, just a lot of pride, really. You know, I'm glad to have done it for everyone at home.

Interviewer: Have you heard from anybody?

McCarthy: Yeah, sure. Our phones have been buzzing, going off. It's mental. I had a quick FaceTime to the family at anti-doping, so that was nice.

Interviewer: How about you?

O'Donovan: I just ignore everyone all the time. I've got the capacity to send about two text messages per day - no matter what the circumstances. That's about it. I just leave the phone in the pocket and jive on. They're not too happy at home, but that's how it is.