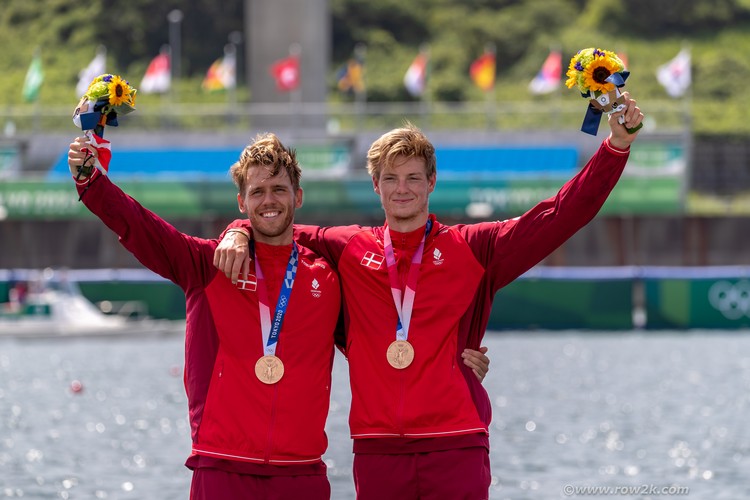 The Denmark men's pair of Frederic Vystavel and Joachim Sutton took bronze in the event; both Vystavel (Princeton) and Sutton (Cal-Berkeley) rowed for US colleges. row2k caught up with them after the racing.

Interviewer: I believe that's your first medal at an international championships. Describe how you're feeling.

Frederic Vystavel: I feel lost for words. Just really happy and grateful. Grateful for the support we've been getting for the last few days, and the last few weeks and months, and since we started this pair last year. It's just hard not to smile and just feel the weight of this medal. It's just surreal.

Joachim Sutton: It's been a struggle for us in the pair. We've been only together for a year now. Fred's changed his side from port to starboard and it took us about eight months, nine months to figure out how we need to be together, understand each other, and-

Sutton: A week it clicked after Europeans, and we've been going pretty solid ever since.

row2k: Both of you guys rowed in the American collegiate system. Do you feel like that experience was helpful in your development in any way?

Vystavel: I think it gave us a mutual understanding in terms of how we go about training and racing, and even though the culture kind of might be a little bit different in certain areas, there's still the same just racing - racing and more racing. Our coach has really enjoyed working with us, and how we are a little bit different to most Danish rowers. Even with the lightweight rowers back in the day, they're known for being some absolute nutters, but you know, that's definitely given us huge, strong foundation to work mentally together.

Sutton: Talk about the US. Fred's from Princeton. I'm from Cal Berkeley. Shoutout to my team and Scott Frandsen who is now head coach over there. For me, they've just really developed me. Just made me be very aggressive out there, and that's also how we rowed here. This rhythm in the pair was super aggressive off the start, off the middle, and that's my time at Cal, what I've learned there and what I've taken into this pair here, and yeah, that's a huge part.

Vystavel: You mentioned racing eights in college. I think the key to an eight is to realize that it's more than the sum of its parts. You know, you might have people in the boat and a coach, and even though we're in a pair we've given ourselves a lot of space and realized that we're good at different things, and we have some weaknesses, but together we've come out stronger as a result, and that's definitely, as Joachim says, credit to the US collegiate system. Go, Bears! Go, Tigers!

row2k: The Sinkovic brothers said that the pair is the hardest boat. Do you agree?

Sutton: I've never seen myself as a pair rower, and I really still don't, but-

Sutton: Once we hit that rhythm, we've been riding that wave. It's been quite simple ever since. Just blinders on, and race our race, and that's good.

Vystavel: Work hard and then figure it out.