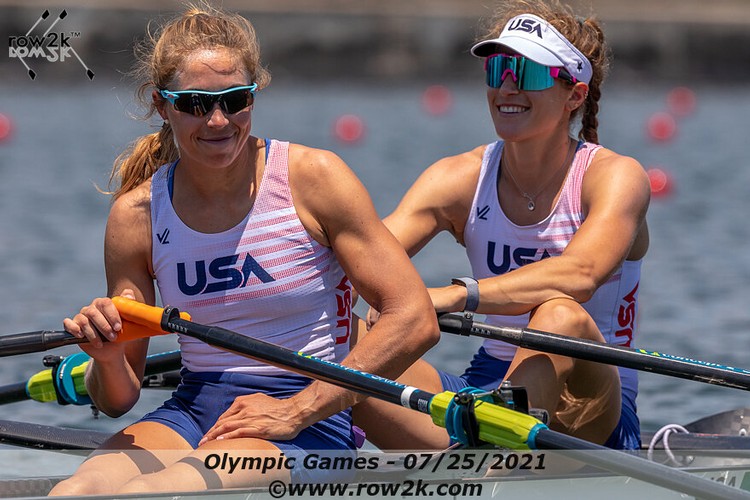 The US women's double of Gevvie Stone and Kristi Wagner rowed from sixth place at 500 gone into a solid third place to advance to the A final and a shot at the medals on Wednesday.

The double talked about the semi, about racing from the back of the pack, the benefits of racing the single, Stone's group of masters men (and now women) who she has trained with for over a decade, and more.

Gevvie Stone: You gotta place top three to race for the medals, and we did that. One of the guys we row with wrote us an email and said the semifinal is like the Wednesday of the workweek, and it's kind of true. It's really hard, and it's not the most fun race because you have to get through it to get to the fun part on the other side.

We knew that we had to be tough in the headwind. It wasn't the prettiest of starts, but we were tough through that base rhythm, and enjoyed every gust of headwind that we got.

row2k: You're relying on your base speed, which is solid, to row back into the field mid-race. In your heart of hearts, would you prefer not to have to do that?

row2k: What is it that lets you dig in and start to go back on the field? What's happening in the boat?

Kristi Wagner: One thing that we did improve from our heat to today was the second 250. I think we lost a lot, especially to New Zealand in the heat, and today I think we started moving a little bit sooner. It still wasn't quite as much as we wanted, but we came into the middle thousand in a little bit of a better start than on Friday. 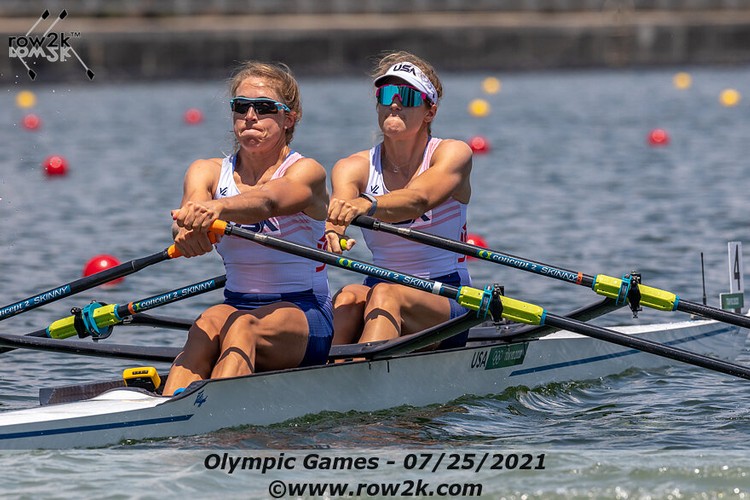 row2k: How about this moment when you finally punched through, and you feel like you had it a little bit in hand?

Wagner: It was a close race; I thought Australia was really pushing us the whole time. I guess it was kind of nice to have them right next to us. They had a good race, and the French had a good race, too. Germany did a great job. I thought it was well fought by all the crews, so I don't know if we really felt super comfortable the entire time.

Stone: There was a moment where I could see three boats in my peripheral vision and went, "Okay. We can do this." There's like that little moment of like a little bit of a deep breath.

Question: Do you know where that was?

row2k: Is experience helpful with that - with sorting that knowledge out from panic or adrenaline or whatever you want to call it where you're not quite sure of what's happening?

Stone: Yeah. Every quadrennial for me, every year has been different in terms of, in the where I start out relative to the field. At the beginning of my single rowing career, I was in the back of the pack off the start line and learned to just kind of be confident through that base. Kristi and I this year, even racing domestically at trials were down off the start, every race we've had at this point, we've been down off the start. So it's not my years of experience at this point, it's more all the races we've had, we've been down at the start. So okay, use the base. It's fine to walk through crews. 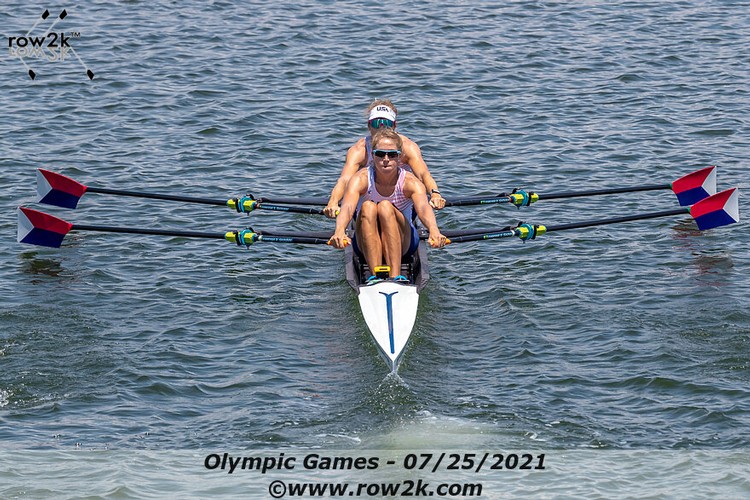 Question: Kristi, in terms of experience, we've talked a little bit before you were at a club earlier in the year and now, you're going to an Olympic final. Have you taken that in yet?

Wagner: I did not want to let Gevvie down, and I was nervous, but I knew we could do it, and I'm not the only first-time Olympian here, and that eight is pretty young, and they didn't have any international racing, and they had no problem qualifying directly for the final and putting themselves in a great spot, so that gave me a little bit of confidence. And just because you haven't done it before doesn't mean that you can't do it.

Stone: Looking across our field at the start line today, there were only two of us that have raced in the Olympics before, I'm pretty sure, so most people are in Kristi's shoes.

Wagner: I think you just have to fake it til you make it a little bit. You can't let the nerves get the better of you, and we're going to give it our all on Wednesday because you don't make an Olympic final just to be there.

Question: Can you talk about the journey you've taken to get to this point? You've reached the moment now, and there's a couple finish lines in front of you.

Stone: There's one finish line in front of me. Another guy I row with sent me an email at the beginning of this week to say "This is it," and it's kind of crazy. I love what I do, but this is it. One more race. So today was hard but enjoy every stroke. We don't get to do this very often.

Question: It's obviously emotional for you.

Stone: Yeah, last one. I've done a lot of them.

Question: Do you wish there were fans here with you to go through this? Is it missing anything?

Stone: I will say that family and friends have been really great about reaching out. It would be a lot harder if we didn't have the social media that we have and technology that we have today to be able to call up someone, even though they're across the world, they're awake and ready.

Interviewer: You're maybe ending something you love, but clearly you kind of restart something else that you've always had out there. Is that also kind of tempering that a little bit?

Stone: It was really exciting thinking about it a few months ago, but right now I'm just focused on Wednesday.

Question: How much of this week have you gotten emotional?

Stone: Right now (laughs)! Every time I read those emails from my guys, they've been with me through it since 2010, and now I have teammates who are female or my age, but the masters' group really has been there every step of the way, and that really is something. Not many people make it three quads, and they put in their time when they were elite rowers, and they're putting it in again.

row2k: With that group, there's a point where you started beating them. How was the dynamic of that?

Stone: Well, they got in doubles (laughs)! And now they're in quads, so they still have the upper hand.

Question: Back at the trials, it was you in a single, but you were able to get here with a teammate have been able to do something. When the single didn't work, did you think you could be here in the double? 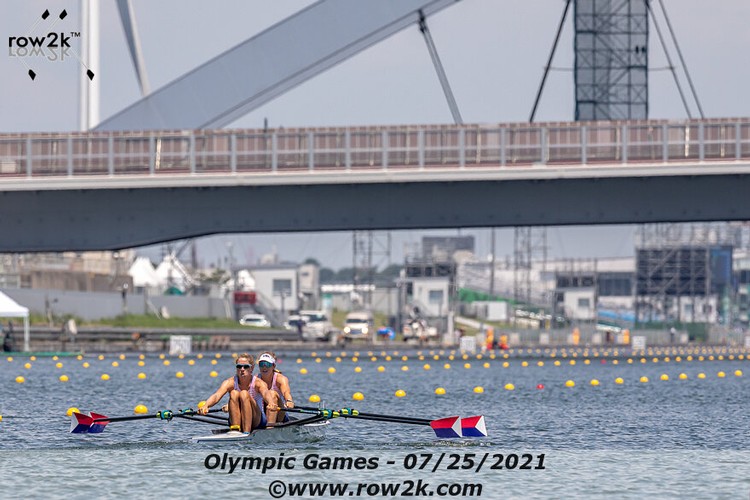 Stone: The same thing happened in 2019, and I think I was almost a little more surprised in 2019, even though I had been training for less time. I had no idea how fast Kara would be at that point. She hadn't been a world's medalist at that point, and I've been focused on the single, then it was a last-minute, like, we were driving home from Florida, like, "Cic, you want to hop in a double?"

So we raced the double at the worlds in 2019, and even though I was definitely focused on singles trials, , I was always thinking of Plan B. As an individual, in terms of the erg in the single, I'm going faster than I was in 2016, and I wasn't going to sit at home and watch the Olympics in the fastest shape I've ever been in. I was going to be in a boat and hopefully help the team and, we're still in that fight for a medal, so hopefully help the team get a medal.

Stone: I think that the single is great training for the double, and I also think that having a regatta under your belt is really helpful going into doubles trials, because there's nothing like racing a 2K regatta on the water. I do think that singles trials is the best preparation for doubles trials.

Wagner: I think you can learn so much from the single. I think everybody should race the single, and then race the double. We all had to row in singles this year, and I was hoping that more of our teammates that are here would race the single just because it's fun to race and you learn a lot about yourself racing a single.

Stone: We were in singles even through leaving for Hawaii - just one row a week which is to get back to that accountability and to feel things out for yourself.

Question: You said earlier on you didn't want to let her down. Expand on that a little bit. Tell us about this relationship.

Stone: It goes both ways!

Wagner: It's Gevvie because she's my teammate and she's in my boat right now, but when you're in a boat with another person, that's true any time. Gevvie is like the masters' guys. She is a fierce competitor, and she means business, and every day getting to practice with her has been amazing. Honestly, it's made me not want to stop rowing the boat. I don't know if I'll be able to convince her, I don't think so - she's very gung-ho on the masters' single at the Head of the Charles. But it's just been quite the pleasure, and it's happy but sad that we only have one more to go. 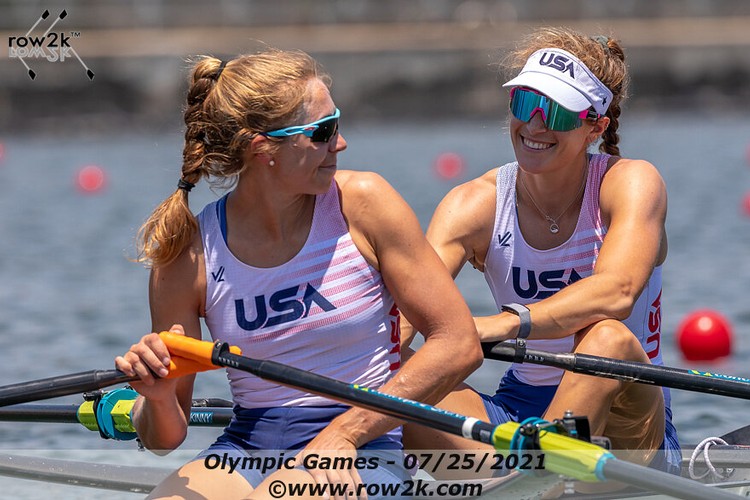