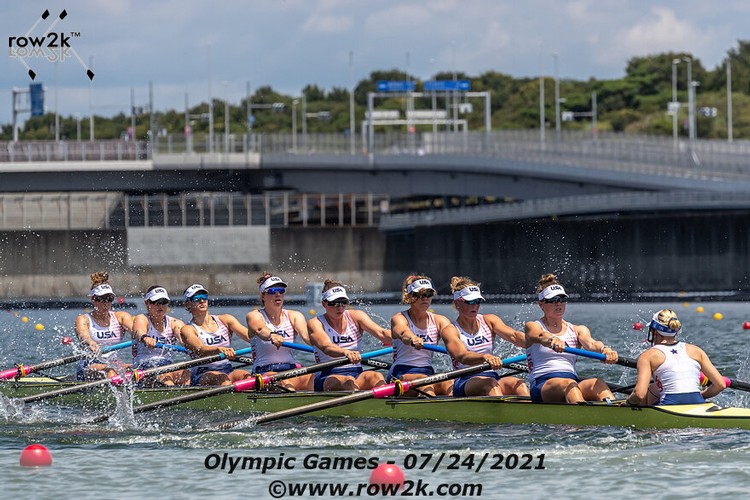 The eights got underway today, having been moved from tomorrow (Sunday) to today (Saturday) as part of a larger schedule overhaul that moved all Monday racing to Sunday.

Several crew members we spoke to were happy to make the change, although not all were; it did force Hamish Bond of the New Zealand men's eight to forego his role as the NZ flag bearer in last night's Opening Ceremonies. Mo Sbihi of the GB men's eight did carry the GB flag, but the GB 8 placed third of three in their heat, not a great result for a crew that beat defending World champs Germany twice this summer.

In the women's eights, the US women won their heat after spotting crews a patch of water in the first 500, while New Zealand won their heat with Kerri Gowler and Grace Prendergast aboard, who had won in their pair earlier in the day, having been forced to double up due to the schedule change.

In the men's eight, the US led the defending world champs Germany through the middle of the racecourse before Germany rallied to sprint to the line for the win and sole advancing spot. The US will row in the reps on Wednesday.

Richard Schmidt of the German eight admitted that his crew had "not been as prepared as we should be" earlier in the year, and had shored up what had been a far less strong closing section today.

We spoke to several members of the US women's and men's eights after their race in the media scrum; here is what they had to say.

Brooke Mooney: It was so much fun to finally race internationally again. It’s been two years for myself, and I was so excited to line up on the start line and race down with these ladies. I was thinking, “Look at the person in front of me, and listen to Katelin’s voice, and just do that all the way down the racecourse.” 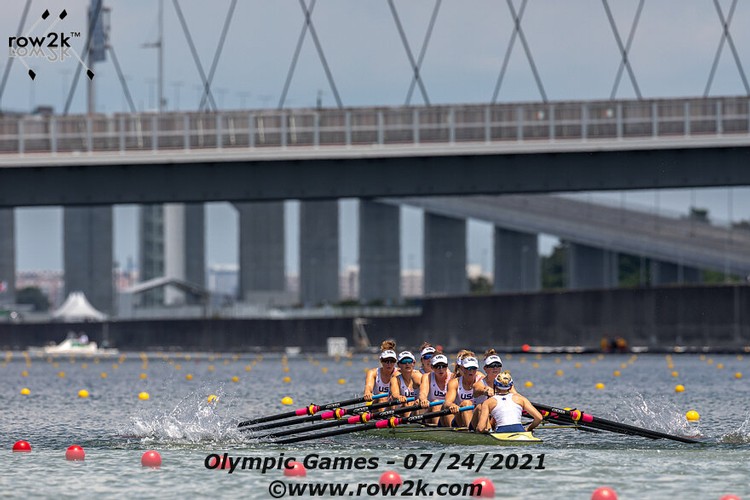 Katelin Guregian: Any time we make a change in the lineup, the best thing about our team is that we are always rowing with each other in small boats at practice, and we’re adaptable, so it’s really just about figuring out what the person in front of you is doing and trying to follow her, and I think that we’re pretty good at that. It’s something that we practice a lot, and we know that, at the end of the day, going fast is all about how hard you can go and how much you believe and how much you trust, and we work on that every day at practice and that’s what it’s all about – no matter the lineup. 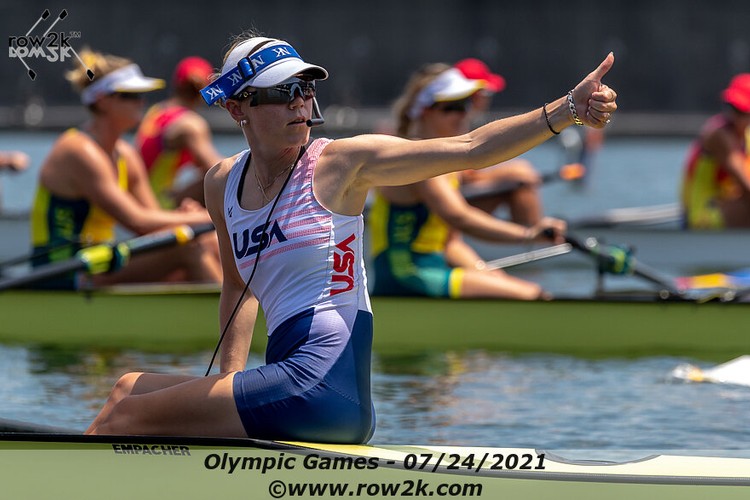 row2k: Is it nerve-racking at all to go test a new lineup in an Olympic heat?

Charlotte Buck: It’s just a lot of fun. Like Regina said, we’re used to switching it up, and we trust every single other member of the boat, so it doesn’t really matter what lineup we are in. We’re just going to listen to Katelin, follow Kristine (O'Brien), and make it work.

Question: Speaking of Katelin, I was standing here, and I could hear from like a hundred meters from the finish, in that last sprint there, “I’m trying to hold off Romania.” What was her message to all of you and what were you all going through there?

Mooney: It was honestly what we just practiced for the sprint – just sit up, go for it, trust ourselves, and haul it through the line.

row2k: It had an even split look to it. Was it nerve-racking at all to be a little down in the early going, and what did you do to rally together to come back through?

Mooney: It wasn’t nerve-racking at all. We race each other so many times, and you never know what you’re going to be off the start line, especially racing crews for the first time in two years. No one knows anyone’s speed. We just trusted ourselves and trusted our rhythm. Once we found that rhythm, then we just go to work and see what you can do.

row2k: Have the veterans in the boat shared anything with you that helped you get to and through this race today?

Buck: We get so many words of wisdom from all of them. Obviously we’re three of the youngest people in the crew, but I think just the messages they shared last night – which are personal about trusting each other – it meant a lot to be a part of this crew.

Megan Musnicki: Every Olympic crew is a brand new experiences, and try and savor every moment, especially when you’re old.

row2k: As a veteran, are there things you learn from the new kids?

Musnicki: Oh, 100 percent! They teach you a plethora of things if you just watch them. They’re young and fresh and they have a new set of eyes. I’ve learned technical things from the younger kids. I’ve learned how to have – not have more fun – to be more relaxed sometimes. The youthfulness is refreshing. It’s an amazing group of women. I’m so incredibly happy to be a part of it. It’s a great crew. 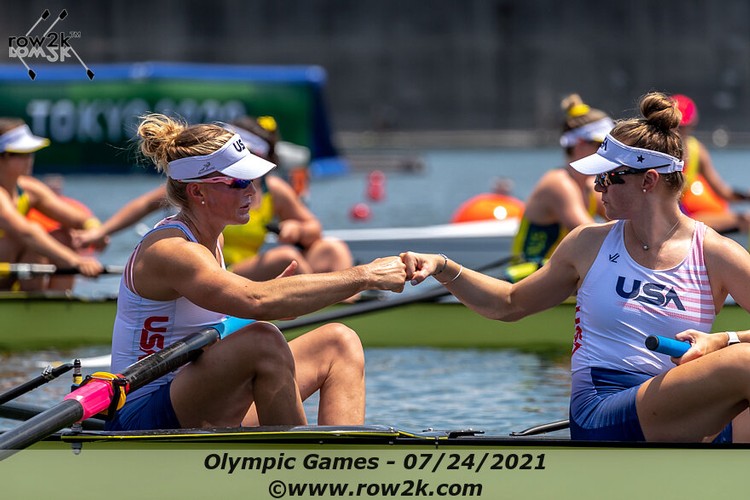 row2k: How did you handle the schedule change?

Guregian: I think we handled it really well. We are oftentimes moving around our practice times and locations and we’re always shuffling things around in practice. And so, we train really hard so that we’re ready to race. Even on our worst day, we can still go our hardest, and the schedule change doesn’t change anything about the way that we approach race day.

Question: What do you need to do between now and the final to feel like, as a group, you’re ready and you’re confident?

Musnicki: You go back, and you find more speed, right? I think it’s a week before the finals, so you go out there and take advantage of every stroke – every opportunity to get a little bit better. To find a little bit more speed is the goal.

Question: Talking to Olivia Coffey, she said she was really excited to harness the raw power of some of the young athletes, and some of them don’t even know how fast they are. What have they shown you in terms of just their speed and what they’re able to do out there on the water?

Musnicki: That it’s unstoppable. These women are young, and watching them grow into their feet basically is like watching a St Bernard puppy learn to walk. They’re like, “Wow! I am that strong and that powerful, and I can be even stronger and more powerful,” and it’s so exciting to witness it and to be a part of it and to get to experience it. You know, I was a new athlete years and years and years ago, and to watch the new younger girls come up and just begin to scratch the surface of their potential is awesome.

Julian Venonsky: This is the first time we’ve had other boats around us, so our plan was just to kind of race our race day and turn on and see where we are in the field. We don’t hold back. We love to race, so we go out there to race. It was a great piece, and we’re just excited to do it again on Wednesday. 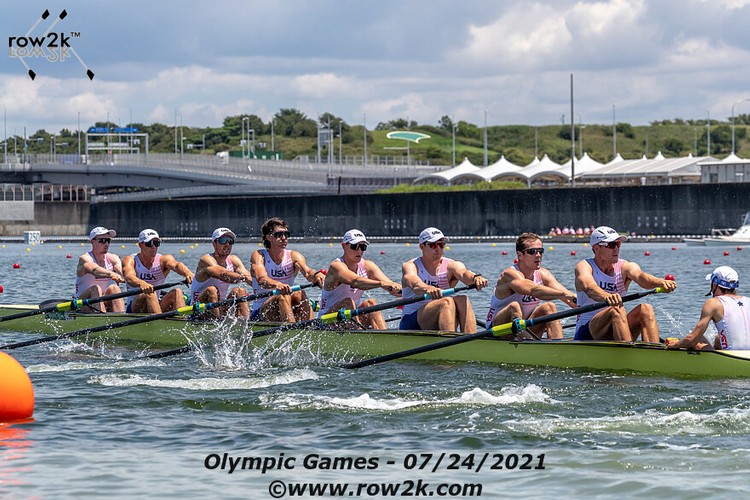 row2k: You found yourself in a real heater after how many months of nothing; what was that like?

Conor Harrity: The last time most of us had raced was in Linz in 2019, so honestly, we were just all really excited to get out there against some very talented crews and see what we were capable of, and we’re looking forward to doing it again during the rep, and yeah.

Austin Hack: I thought it was a strong piece in a pretty young lineup. So, I think, to run neck and neck with the best in the world for almost all that race was a pretty impressive effort, so I think we’ll just look to sharpen up that last few percent.

Question: What do you do between now and then?

Liam Corrigan: We’ll just dial in a few more training sessions. I’m sure Coach Teti will have some words of wisdom and some things for us to focus on that will make up that small margin we have to go.

Question: How did you deal with the schedule change yesterday?

Harrity: That’s easy for us. We practice in a pretty unpredictable situation; depending on winds, we will adjust where we row. There’s current and winds, so we’ll change our practices to adjust to all that. A day over here, a day there. it’s not much for us. We can race whenever they tell us to. I thought that we handled it very well. 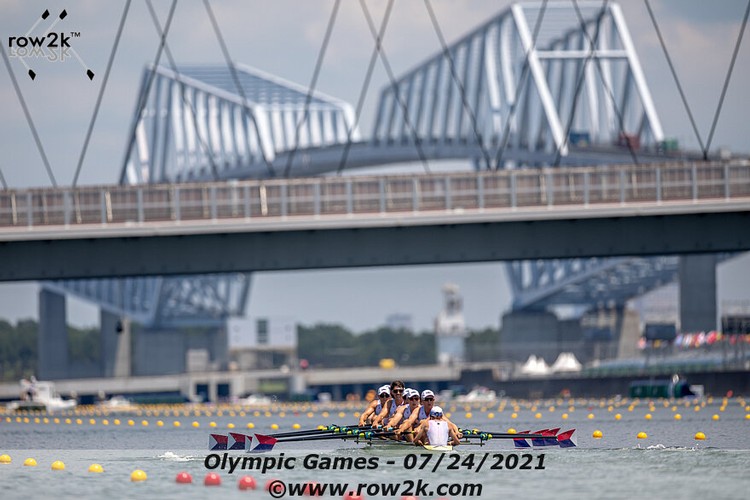 row2k: For the younger guys, for the first-time guys, is there any element of “okay, this is an Olympic heat," and how did you handle that?

Alex Miklasevich: It was definitely hard to ignore when you see Olympic rings at the starting line. Just before the race, I was trying to stay as cool and as calm as possible, and then when the time came, just using that extra bit of energy or adrenaline to our advantage.

Justin Best: Sometimes you just have to put blinders on, and it’s just another row – another row with your team. That’s what I was personally trying to focus on. The moment I got to the course today, I had my blinders on. I knew what I needed to do. I needed to do my warmup. I knew that all these guys had my back. So, inexperience aside, I just try to keep focused on the goal.

row2k: And do you rely on the veteran experience?

Venonsky: (Gesturing to Austin Hack) Well, he’s the only veteran! 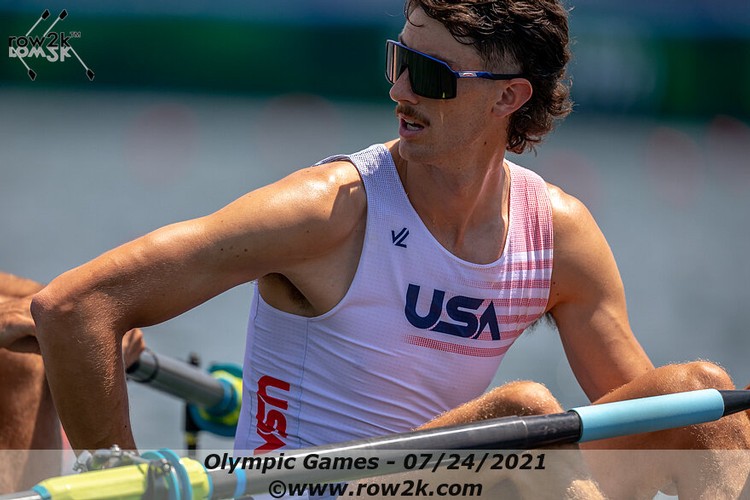 Hack: No, I think even though we’re a young group, the guys do a good job. I try to peep in now and there with any words that might help from my experience in the last row down, but it’s an easy group to work with, so there’s really no kind of veteran versus young kind of interaction like that. 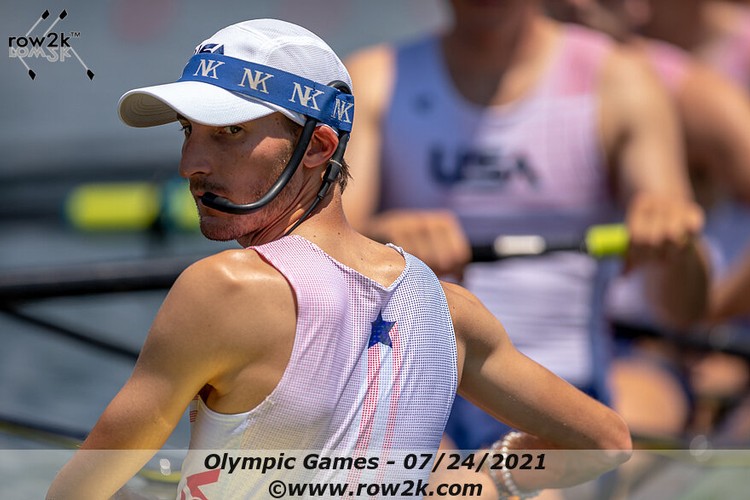