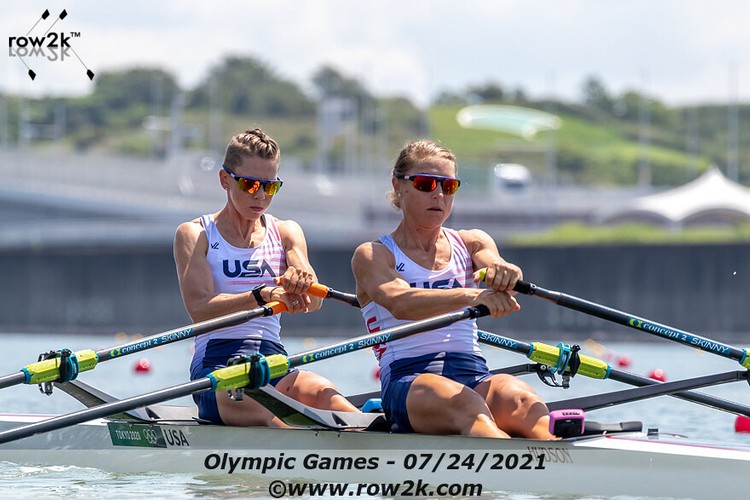 Lightweights got started today with three heats each of the light women's and men's doubles.

In the light women's doubles, the US crew of Michelle Sechser and Molly Reckford put in a dynamic race in the first heat of the event, reaching the 500m mark in fourth, and then hauling themselves fully into second position with just a few strokes to go before just missing the mark to advance straight to the semifinal; they will race in the reps tomorrow.

We spoke to Molly Reckford as well as the Dutch double; here is what they had to say.

row2k: You had a long road to get here; it started in February, but really started long before that. Before the race, did you reflect on this at all?

Reckford: It was such a relief to finally get to the line, especially with all the travel that we did before we came to Japan. So, having been training in Florida, training in Chula Vista, then pre-camp in Hawaii, and now finally here, it has felt like a very long road.

We didn’t really talk about it too much in terms of the big picture though. I think Michelle and I have both been focusing on one race at a time, and it’s just another race. This is what we do. This is why we row. So for right now, it's trying to be a goldfish and just trying to win the race you’re in. 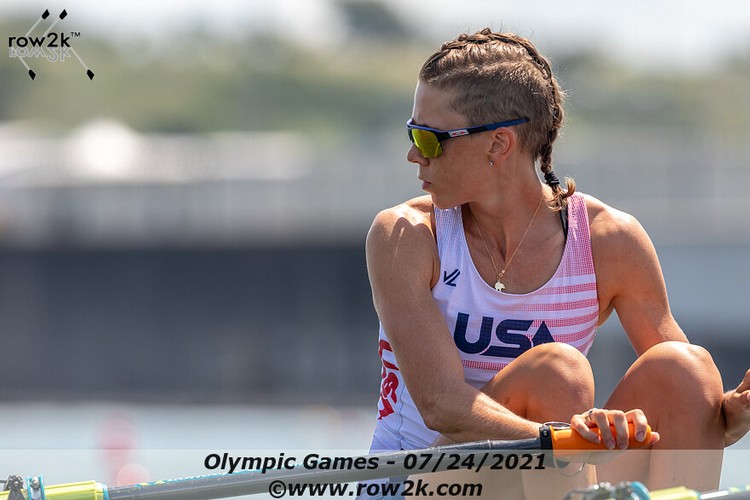 row2k: You had a really dynamic race. Could you talk about that experience?

Reckford: I wish I could speak about it in a more informed way (laughs). I haven’t even looked at the times yet, but yeah, it was an awesome race to be in. I think that that’s one of the reasons the lightweight boats are so exciting – because you trade bow balls all the time, and you’ll get two, three, four boats across the line within two seconds of each other.

It was definitely a hard vantage point trying to see from Lane 6 what was going on in Lane 1, especially in my seat, not having as much race experience, not being as good at looking across the lanes and being able to tell “is it a bow ball up or a bow ball down?” from so far away.

But being able to trade seats, being able to respond was one of the most exciting parts of the race for me. Looking across, realizing we were down, calling a move, and then moving, when the boat responds like that, it’s really exciting, and it’s really a good sign. 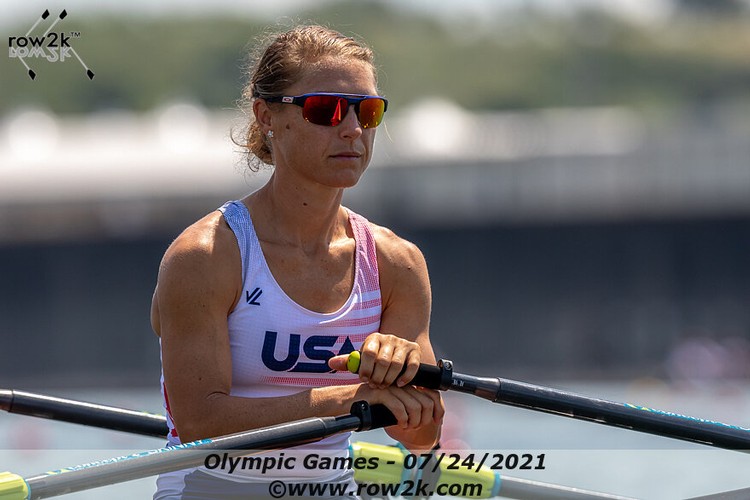 row2k: The course is somewhat a mirror image of where you’ve been training. Did you find this to be familiar?

I would say that training in Sarasota, we knew that we should spend the spring and as much of the summer as possible there because it was perfect training conditions and, honestly, I don’t think we had as calm a day as this once in Sarasota! So we really came feeling quite prepared – even down to the fact that the wind is often a bit more of a cross head or tail than a direct head or tail. Benderson gave us everything we needed to be ready for this heat and humidity, so it was good. It was a good choice.

row2k: You guys have shown speed all summer, so have you discussed at all how you come back tomorrow? Given your experience, what might you tell perhaps a 17 year-old rower who was in your situation and had to come back the next day and race hard?

Reckford: We are always students, and we are always learning and always trying to improve. We have already had a team meeting and talked about what went well during the race, what can still be improved on, and what do we really need to focus on in order to make the changes we need to change? We’ve even discussed making some small changes in our warmup. So I think just remembering that – no matter what, no matter how fast you think you’re going – you can always go a little faster. At this point, really executing those changes and really taking them to heart and knowing that this is it. This is the end of the road. The season is over after this – win or lose. And so, we want to put out our best performance and we want to row our best race. 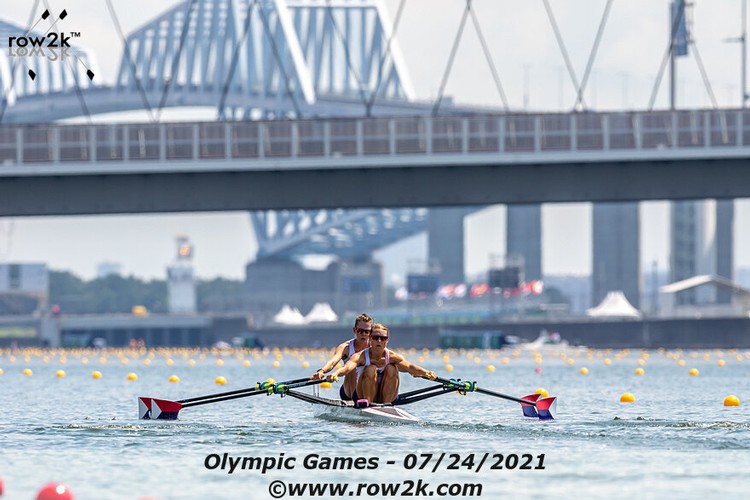 So to a 17-year-old, I would say that even when you’re at this level, there’s always something you can improve, and that doesn’t mean you’re bad. It doesn’t mean you’re slow. It just means we are always striving for an unattainable perfection, and just try to get a little closer.

row2k: There's a real tradition of excellence by Dutch crews in your event, do you feel part of this tradition and does it create pressure, or does it help?

Keijer: Ilsa IS the tradition!

Paulis: We definitely feel part of the tradition; we've got a long history in the lightweight women's rowing, and I don't necessarily see it as pressure, just that there have been some amazing women who have done it before us. I've been part of that before, and it fills me with pride that we can build on the shoulders of all those good women. 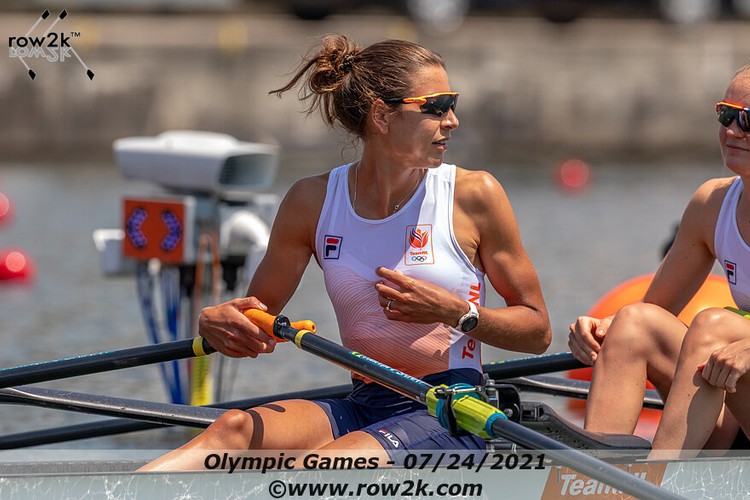 row2k: If she is the tradition, what have you learned from being part of it?

Keijer: It gives me confidence that she knows that what we are doing, that the program and all the hard work, can work out. So when I look at the other boats, I think YEAH! I got the Olympic champion and they don't!

row2k: Similarly, you hold the world record, is this something that comes up in practice, or at the start, or during the race? Not everyone out there holds the world record either!

Paulis: I think it does give you a boost of confidence, especially the one in Saubadia this year, because it was even faster than we would have expected ourselves. On the other hand, every race is a new race and just with the history you are not gonna make it. You need to be able to reproduce results, and you need to be able to put down a good race for every single one of them. 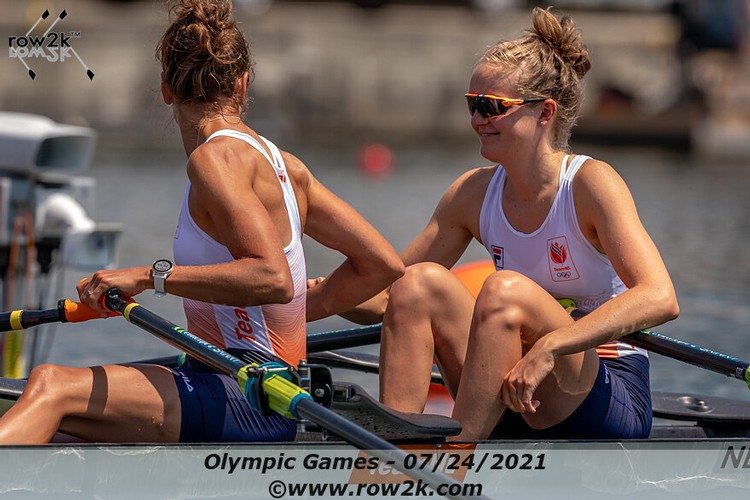 Keijer: I really liked it (laughs)! Rowing a world's best time, the wind is good, the water is good, the boat is good, everything is good, but you know that we are fast. Maybe other crews are fast too, but we did it and that was really fun.

Ilsa really likes data so was already enjoying that moment earlier in the race, but I am just proud that we achieved something that no one ever did before. When I look back, someone can take the world record, but they can't take away that moment away, so I am very proud.

row2k: Did you know you were on world's best pace?

Paulis: We've got a bit of a difference; Marieke rows more on feeling, and I like data as we said. I could definitely see our pace and the split times, and knew exactly what we needed to do - so yeah, I was already enjoying it during the race (laughs)!

row2k: Did you say anything?

Paulis: I did but I don't think it landed.

Keijer: It was very funny.

Paulis: After the race i could see on the SpeedCoach that we rowed a 6:43-ish, but Marieke didn't believe me at first.

Keijer: It was a funny story, but I am in the bow, so I am saying when we go fast or not, or push harder. The coach made sure that, 5:05 at the fifteen hundred, then had to do something like 1:41. I thought for a very long time that 5:05 was a thousand meter time (both laugh)! I had no clue it was a fifteen hundred meter time!

Paulis: We are just very different in our perspective, but we work really well together.

Keijer: Yeah! It doesn't makes sense but I just didn't... I like just rowing. 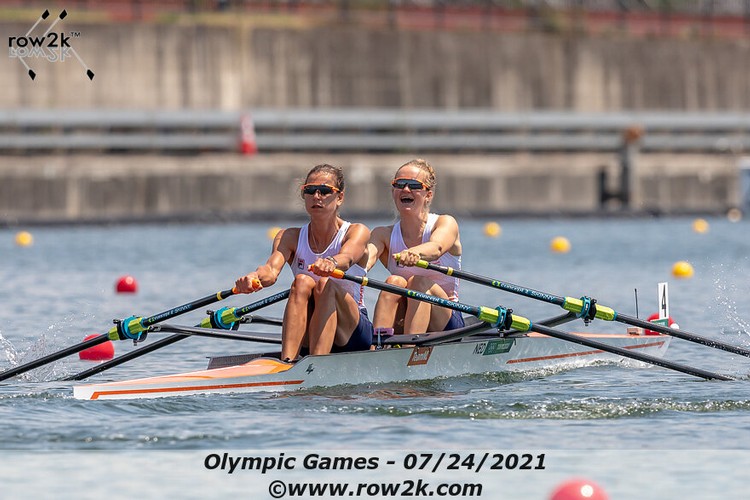