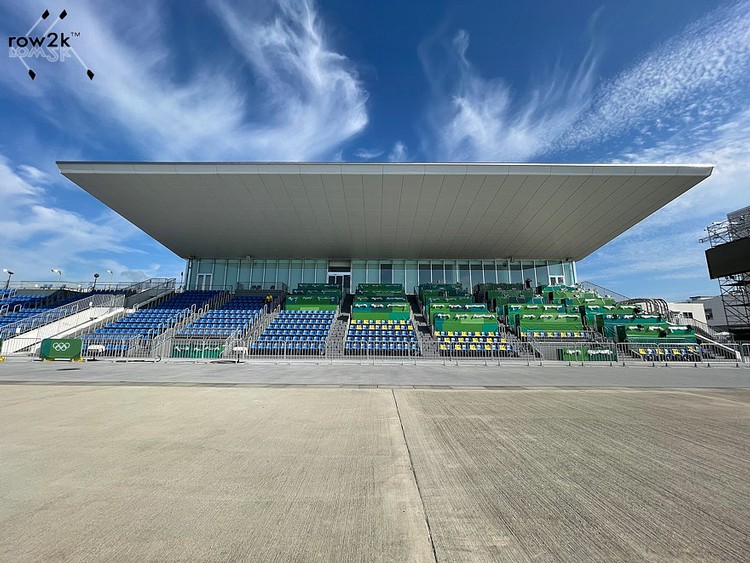 As sporting events resumed competition in empty stadiums and arenas last year, social scientists seized on a rare opportunity to study the effects of crowds - or as it went, the lack of crowds - on sporting performance.

There were some stunning, unexpected, and in some cases unsettling conclusions:

Although all high-level athletes toil to some extent in relative solitude, at least in the hours it takes to get very good at your sport, it might be that rowers are almost uniquely suited to a spectator-less Olympic Games.

- Ergometer testing is often done by one person at a time, with no one else around but a coach or coxswain
- Seat-racing, one of the most dramatic events in our sport and which can be an intensely isolated experience despite taking place in team boats, is similarly witnessed only by teammates and a coach
- And even our highest level selection events are held almost exclusively in front of a handful of people at most; certainly row2k galleries bear often nearly sole witness to that.

In rowing, Olympic teams are made on lakes in New Jersey, the Estuary in Oakland, 2.5 miles of river in Philadelphia, on a pond in Aiken, South Carolina, on rowing machines in humid erg rooms.

In short, rowers nearly routinely offer up the very best performances of their lives with almost no one looking.

Having medaled in the quad in front of the large and extremely loud London Olympic rowing crowd, rowing this year in her fourth Olympics, and of course having won plenty of early morning trials at nearly empty venues, US rower Megan Kalmoe has experienced both extremes.

"We all have a lot of practice performing at a very high level with little or no crowd support. Tracy and I won our final at Olympic Trials this year with about a dozen people there. I PR'ed on my 6k this year erging at home alone at 5pm on a Thursday. Having crowd support is a very special, rewarding bonus for getting to the Games, but we know how to do our jobs without it."

Kalmoe does feel for younger athletes who will not get to experience the roar that grows as crews reach the final third to quarter of the 2k course, to the point it is almost deafening in many cases.

"The biggest thing I will regret with the lack of crowds in Tokyo is that piece of the experience that first-time Olympians will not have," she said. "Having raced at the Games and some well organized World Championships, and the Windermere Cup (!) having a loud crowd at a regatta is not a new experience for me, but for some athletes, it is. Rowing has so few opportunities to have big, packed venues, this is a tough one for first-timers to miss out on. I wish for them that they could have had those special moments closing in on the grandstands as part of their Olympic experience.

For herself, it's not the roaring crowds that Kalmoe will miss; rather, it is loved ones.

"More personally, I am disappointed that my friends and family couldn't be here," she said. "I was going to have potentially my biggest ever group of supporters here in Tokyo and now none of them can be here. Knowing that this was their last chance to support me at the Games, or at any international competition, is sad for me.

"I see my family so rarely because of training, and my partner, Peter, has been so patient and supportive during long stretches of a long distance relationship, it would have meant a lot to me and to them to be here."

Of course, these numbers include host families, employers, significant others, and poignantly former boatmates, some of whom barely missed out on being here themselves, and did all and sometimes more of the work that would have been required - but who, as the athletes who did make it often remind us, pushed and supported the final selected crews every day, every practice, every step of the way, for five years now and more.

As it goes, rowing will occur in near-prime time in the States, with east coasters having to stay up a bit late for noon races Tokyo time - the east coast is 13 hours behind, the west coast only 10, so a noon race happens at 11pm and 8pm respectively.

So it isn't a real hardship to follow along, and having been surrounded by many of the families and friends of the athletes at 7am trials over the years, they are among the athletes' and our sport's strongest supporters, an irrepressible bunch, and they will be felt if not heard.