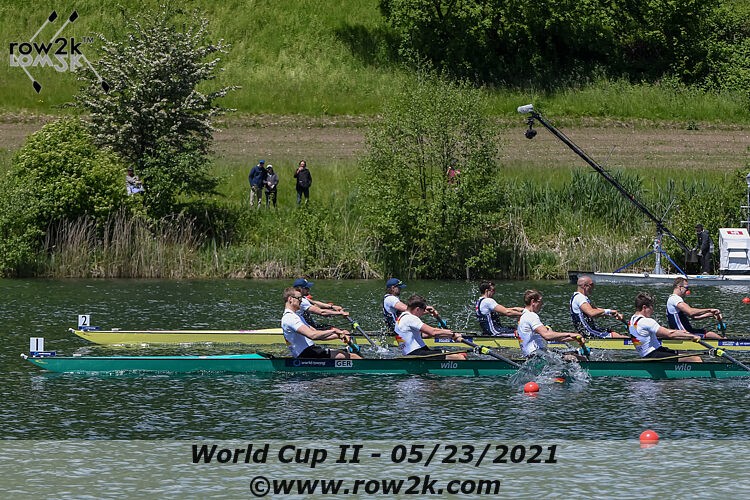 GBR and GER stroke for stroke in Lucerne

Racing for the 2020 Olympic Regatta begins on Friday, July 23, in Tokyo, Japan. Below, we preview the men's eight. 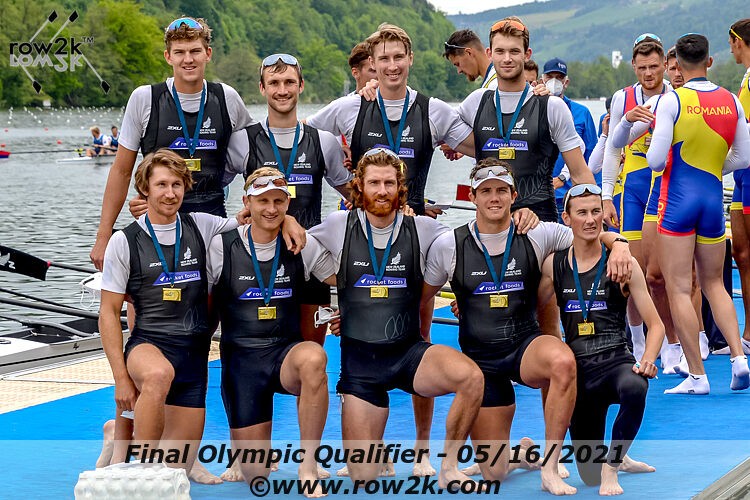 LINZ 2019 RECAP
Germany had the quickest start, reaching the first marker with a deck lead over Australia who had a deck lead over Great Britain, United States, and The Netherlands. It were the Dutch that moved in the second 500 and moved into second and within two seats of Germany. Great Britain and Australia were level for third. Germany continued to lead The Netherlands by a couple of seats at the 1500 the Brits and Aussies still level about a length back. All crews sprinted to the line where Germany won the gold, The Netherlands silver, and Great Britain taking the bronze over Australia, USA, and New Zealand.

EUROPEAN CHAMPIONSHIPS
Germany got out to a big lead early in Varese, but were rowed through in the last 500 by Great Britain, Romania, and The Netherlands to finish in fourth. Great Britain took the gold, holding off a fast charging Romanian crew.

FOQR
The two qualification spots for Tokyo were won by New Zealand and Romania.

WORLD CUP II
Epic race between Germany and Great Britain, essentially going stroke for stroke the entire length of the Rotsee with the Brits edging out Germany to win by a bow ball. The Netherlands finished in third.

WORLD CUP III
Germany got the win over an unqualified Italian crew by just over one length in a two boat race in Sabaudia.

USA PROSPECTS
The Tokyo Olympic USA men's eight is a new lineup with five returning rowers plus coxswain from the 2019 crew that finished fifth in Linz. The returners are lead by Austin Hack, who stroked the USA men's eight at the Rio Olympics and won a bronze medal in the eight back in 2013 and gold in both the 2011 U23 M8+ and 2010 JM8+. Ben Davison was seven seat in 2019 and has extensive international racing at the junior, U23, and senior level since 2013. Nick Mead and Alex Richards both raced in the eight in Linz and in the silver medal winning eight from 2017. Conor Harrity has been in the eight in both 2018 and 2019. Then coxswain Julian Venonsky has coxed the eight the entire Tokyo quadrennial, winning a silver with the 2017 crew.

The standard for the men's eight in Tokyo is high with all seven crews being very fast. The USA squad should make the final, but will have their hands full making it on the podium.

MEDAL PICKS
The men's eight final is looking to be an epic six lane drag race in Tokyo with no clear favorite and all five crews that have raced so far in 2021 (GBR, GER, NED, ROU, and NZL) showing podium speed. That means the wildcard crews of Australia and the USA will need to bring their 'A' game just to make the final. Great Britain and Germany have been on the podium almost every year since 2008 (exception being GBR in '09 and '17), so history says they will both be there in Tokyo. Then the Dutch are always dangerous and return their 2019 crew intact. New Zealand have prioritized their eight on the sweep side, and looked very fast against a strong crew from Romania at FOQR. So be ready for anything and everything!