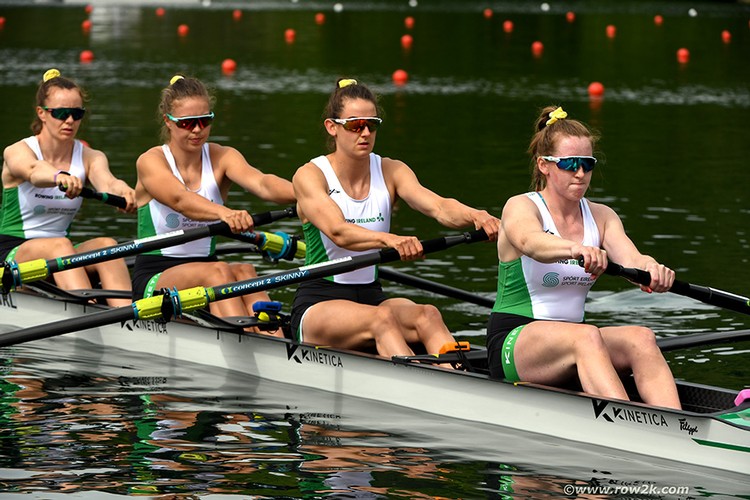 Ireland's rise in rowing is hard to miss. The Olympic Qualification Regatta in Lucerne saw the lightweight women's double and the women's four come through to bring the total number of crews headed for Tokyo to six – a record. The young double squeezed into the final place of their competitive class. But the progress of the four was majestic: Aifric Keogh, Eimear Lambe, Fiona Murtagh and stroke woman Emily Hegarty zoomed away from the rest in both the heat and final to win convincingly.

Two years ago, at the World Championships in Linz-Ottensheim, the four finished 10th, and missed qualification by two places. At the European Championships in 2020 they took bronze, this year they took silver, and they improved again at the weekend.

Where did it all go right?

Aifric Keogh tells a story of a spirited group of eight women who compete for places in sweep boats – and a combination of four which 'clicked'.

Her own tale involves an illness which saw her miss most of 2019, and only come into the four in time for that year's - ultimately disappointing - World Championships.

"I think when we missed out in 2019 - we were fourth in the B Final but we had been just a second off making the A Final in the semi - that was the first big upset.

"I don't know did we fully believe as a crew going to Linz that we would qualify for the Olympics."

The crew had come together late, and Keogh thinks they lacked confidence.

"But then when we saw how close we were and by how little we missed out, that gave us belief for the following year - which turned out to be two years - to keep driving on."

The rising success of the team was a big help: in Linz, single sculler Sanita Puspure and the lightweight double of Paul O'Donovan and Fintan McCarthy won gold and the men's double of Philip Doyle and Ronan Byrne took silver. The women's pair of Monika Dukarska and Aileen Crowley also qualified their boat for Tokyo.

"It really does give you a belief that you can do it, too," Keogh says.

"So, while this year has been very successful for us, I do think it's been a long time coming.

"We have been there or thereabouts previously, but this season has been different. We knew we were very fast. We just had to execute it on the day."

The present crew combination was put together for the trials in March of this year. Different combinations were tried before this unit came together. Under coach Giuseppe de Vita and HPD Antonio Maurogiovanni, they are a frig rigged crew, stroked from the bow side by Hegarty.

"This combination did not actually have that much training time. It was one of our first races [together] in the trials and it just clicked. We set a good time. We did very well [in comparison to] the rest of the team in that trial and we ended up being the one that was selected.

"It was good because we knew, having done only a handful of sessions in it, that we could go at that speed straight off the bat."

They hit the ground running at the 2021 European Championships, taking silver even after being disappointed with their early speed. They then had weeks to improve again.

Keogh has little doubt that the crew is strong because of the spirit and talent in the whole group.

"There was so much competition to get into this boat. We would have had a fast four - I have no doubt - with any combination.

"We wanted the whole team to go [to Tokyo]. If the four had not qualified today we would have to go home and seat race for the [already qualified] pair. That is something we wanted to avoid at all costs."

She sums up the sense of purpose in Lucerne: "Get the four qualified and that is eight including spares. The whole team goes [to Tokyo]."

How far do they think they can go?

"I think we can win a medal at the Olympics. I know that's almost a scary thing to say, given we are qualifying so late, but we have been working towards this qualification for two years now.

"When we were training for qualification, at the back of our minds we were always training to have a medal performance if we did, ultimately, get there."

Talk of the camaraderie of the women of the Ireland squad is not just talk. They have an online presence as Big Strong Gorls (access it on Instagram), and they root for each other in training and competition.

"Absolutely. We always joke that rowing is hard enough, so we may as well have some fun with it.

"At the time when we were given the extra year for the Olympics it [seemed] the worst thing in the world. But I think we can all say it was nice to have that extra year together because you never know [looking to] next year or the year afterwards what any of us will be doing.

"And this year was pretty boring and dull for the rest of the world. So we were not exactly missing out on anything!"

Keogh may appreciate it more because illness threatened her career only a short time ago.

"I was thinking to myself that around this week two years ago I was in hospital. I was set to compete in - I think it was the Europeans - in Lucerne that year. I was entered and ready to go; it was due to be my first race of the season. And it all fell apart."

With expert medical guidance she made it back for the World Championships. And it has been an upward curve from there.

Qualifying for Tokyo was "amazing": she remembered back to the World Championships in 2015, watching other Ireland crews booking spots for the Rio Olympics, but not being fully part of it.

"Today, I felt, was our time to have that.

"When the lightweight girls qualified we were all on the bank. It was a nice moment.

"It was so emotional, seeing it from that perspective, on the bank. I was absolutely delighted for the girls."

Keogh is just 28, but she has long years of experience compared to that lightweight double.

Margaret Cremen is 22, Aoife Casey just 21. They were up against women who were more experienced, both in years racing and in competition terms.

China missed out in that race, but in the fours final China – deservedly – qualified. Their four had been ninth in Linz in 2019, even closer to qualifying directly than the Irish in a race run in bad conditions where a lane redraw might well have altered the result.

But all that is history now. All is mended. Ireland have the Olympic Games in their sights.

"It's amazing now that the whole team [of women] is going," Keogh says.