What was the race like? You guys were in third in the first half of the race.

Snyder: The race was to just go as fast as we could from point A to point B. We really tried to stay internal. It was really exciting when we pulled ahead, but the race point was just 2,000 meters as hard as we could go.

What did you tell your crew at the start line?

Snyder: Trust your plan, trust your fitness, everything's going great, everything is going exactly as we planned, and we executed perfectly.

At what moment did you feel like, yes, we got it?

Snyder: In the last 100 meters. It was really exciting to pull ahead in the third 500 because I think we all really trusted ourselves in the third 500. That was an exciting feeling, and then coming into the sprint, having a good first bump felt really good.

Describe that feeling when you're in third then took the lead.

Musnicki: It's an indescribable feeling. The entire way down you could feel all nine of us fighting to push our bow ball forward. It was our goal to stay very internal because we knew that it was going to be a tight race. We had a heat where we were pretty far out and we knew that this was not going to be the same way. So, it was very important for us to listen to Kaitlin and kind of do it as one.

Did you feel like you are a teacher in the boat?

Musnicki: No, I hope that I taught these girls some things. I can tell you that this group of women taught me a whole lot of things, even being a veteran on the team. You learn so much from each other if you're open to it. It doesn't matter how long you've been on the team.

How much pressure is there to be in this boat and to continue the streak?

Musnicki: Of course there's pressure, because all of you guys keep talking about it! But it's our goal as a team. It's easy for the outside to look in and say, ‘this team has won so and so number of years in a row.’ And, well, that's true, the U.S. team has. But this boat of nine women, that was our second race together. So, this boat of nine has only won once before in a heat. It's a completely different group than the one last year and the year before that and ten years before that 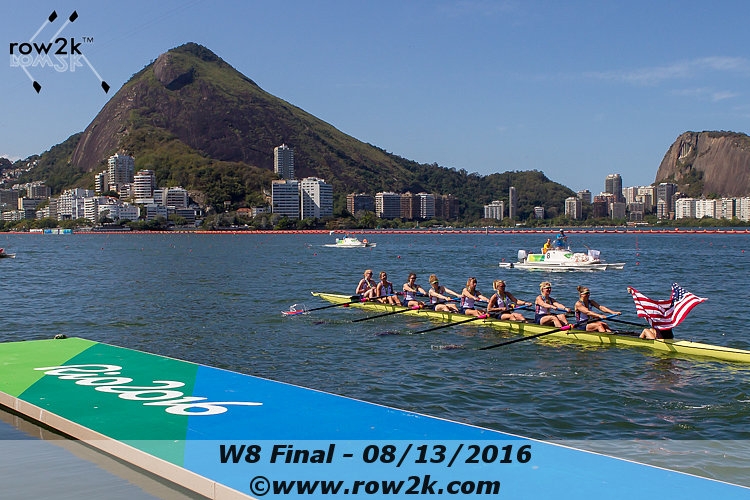 Does this gold feel different than the one in London?

Musnicki: Both feel awesome. It's going to take a little while for it to sink in.

What do you think went into all this from a historical standpoint? How hard is it to build a program like this?

Musnicki: I think it takes years. It takes so much. All of our supporters at the NRF, our families, and just everything put together. Plus our coaches and all of the athletes. It takes a whole country!

Amanda, do you think being an alternate in London pushed you forward and got here for this Olympics?

Polk: It definitely pushed me. After 2012, it was a very tough decision for me as to whether I wanted to continue rowing and try to get here. I couldn't be happier. The last four years have been the toughest years of my life, but it's because of these great women as well as the rest of the women in the Princeton training center back at home. We came in everyday, we pushed each other to our limits, and I learned things about myself that I never would've learned if I hadn't come back.

What is it like training with the group in Princeton?

Logan: This practice a couple of months ago, we had an indoor rowing practice and a group went before us. I remember looking in the mirrors at the faces as they're finishing their piece. Everyone was giving a hundred and... 200%, and it was all over their faces. I said, "Wow. What an amazing experience, to be a part of this group where everyone is just giving everything they have every day." Each moment, each practice, and keep getting better is just... It's an amazing experience.

For anyone who's good at evaluating the emotional response of your coach, what was Tom like after the race?

Regan: He was just proud of us. I think in addition to the girls on the team, our coaches are the only people who really know what we've been through and how much work we've put in. I think 99% of the year... or four years, the entire cycle, he keeps it hidden. But he definitely let us know that he was proud and thankful for the work that we put in.

Do you feel pressure being the coxswain of this boat?

Snyder: I don't really feel a lot of pressure. I think that I want to win just as badly, regardless of whether people have won before me or not. I think that we're really, really fortunate to be on a team where you get to train every day with Olympic gold medalists. I've learned so much from Elle and Mus and the other medalists on our team. Everyone in the boat has a gold medal from the world championships and so it's really exciting to be able to draw from all that experience. Taking over for Mary has been the biggest blessing. She's been so incredibly helpful. She knows Tom. She knows how the team works. She knows what it is to manage a really big group of women. To see how she took ownership over the position gave me confidence when I came back to take my own ownership over the scene. I don't feel pressure. I feel really blessed.

Elle, since this is your third Olympic gold medal in this event, how does this one rank compared to the others?

Logan: It's a totally different experience. Megan and I have been saying this, but we feel so fortunate and lucky to be a part of not only this boat, but of this team. Their hunger to be the best that they can be every day has really pushed us to a new level that we didn't know we had. We're not really comparing. Every day, we had a look to be better ourselves. It's just been so amazing to see everyone...to be a part of this boat, and like Katelin said, everyone take ownership of our boat.