The British Men had a dominant performance here in Rio. Lead by GB men’s head coach Jürgen Grobler, GB won gold in the Men’s 8+ and 4-. Here is what Grobler had to say after the men’s 8+ final.

You said this 8 is a difficult group to manage because there's so many of them. Are there different personalities? Why are they difficult?

Grobler: Not difficult guys, but more just eight individuals you have to bring together. If you can manage that, that is a harmony. Eight rowers with different ways of think trying focus on one big thing. It's always challenging, and it’s challenging for everybody who wants to be in that boat. You know, there's a lot more guys around them. They are important to the team, of course. You can't upset them because maybe tomorrow you need them. It's more than just those eight. It's at least twelve guys around that eight, and everybody tries to get in.

Any thoughts on Peter Reed and Andrew Hodges on their three golds?

Grobler: I think that's very special. They're quite fundamental to the eight. We kicked off together the eight in 2013. We did different races and we won the coxless four in 2014. Hodges was a year out because of illness. Pete was always in the eight and played an important role in the eight. I think that so far, it was a good mix-up with the new coxless four and the eight.

What does it mean to you personally, winning an eight with one of your crews?

Grobler: There's no question, it's a highlight of my coaching. Having 13 Olympic champions that's fantastic.

Good note to go out on, though, Jürgen, eh?

But you're going to stay on, aren't you, in the role, and try again?

Grobler: We haven't made any final decision, but I still enjoy my job and I enjoy working with the guys, and as long as you have the feeling, you know, you're not looking toward, you can't be in the driving position maybe. We will see.

Was there a point where this crew began to turn into a really, really good crew?

Grobler: We had not so a good season, I must say. It was a little bit up and down. Our expectation was always higher. The training data was a lot better than the regatta results. We know there was a lot of potential, but sometimes you find the right button to make it click and make it working again. I think that's definitely was the last world cup, we came back on top.

The plan today was always go out quick, hold on?

Grobler: You know, in an eights race, you have to be in the mix . You have to challenge it right from the word go to be the top eight. Otherwise, it's very difficult, especially in the men's side, to put something back.

Then it was never in doubt, was it?

Grobler: No. I think, really, inching out and the state with their wisdom was quite important. Being really consistent over the distance, like we did in the coxless four was part of the success.

Do you have any plans for tonight?

Grobler: I haven't planned anything. We'll see what's coming up.

Is the way you win as much a victory as the victory itself?

Grobler: No, I like to help young people to pursue their dreams, and I think that sport is about them. It's not about the coach, you know. And I know my rule, but I enjoy it in my way, because we have done it. 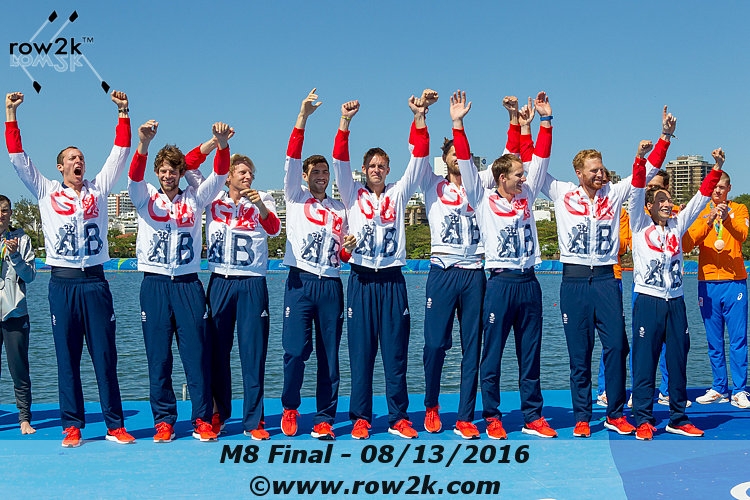 The British men’s 8+ also shared their thoughts on the day. Here is what they had to say after the men’s 8+ final.

Can you share your thoughts on this race compared to London?

Andrew Triggs Hodge: You know, I'm equally as proud of this one as the first and the second, and nothing can take anything away from each of them. It's just a fantastic day to be a part of this crew. To have delivered what we've known we can deliver for such a long time, but to bring it out onto such a glorious stage, to be able to go out here in Rio, it's just been brilliant.

Pete Reed: You can't compare them. Beijing was my first. It was special. And then London was home, and this one is something special as well. It's very difficult. I just want to say how much respect that we've got for the guys sitting to our left and right. We've only got half of the crews here. To the guys outside, as well. It's just been a massive fight, not just in the last couple of hours. It's been going on for months and years and years. It's easy to say now, but we like all these guys personally, but on the water we're the biggest of rivals. We fight tooth and nail. It's just been the hardest battle for a long time. Credit to the guys left and right, the guys who aren't in here, fourth, fifth, and sixth. It's been monumentally hard, so thanks for making that hard.

This season, have you been purposefully saving stuff back for this? Obviously you've not been winning so far this season, so was that a purposeful thing to do?

Paul Bennett: No, definitely not. This is eights racing. You have absolutely no idea what's going to happen until it comes to the day. We've proved that in years gone by. You know, eights racing is a separate beast entirely to everything else. You know, people really have to get themselves up for it. The nerves and the pressure, there's nothing else like it. I love eights racing for exactly that reason. No, we haven't been saving anything at any point during the season. We raced our hardest in Brandenburg. We raced our hardest in Lucerne. We raced our hardest in Poznan. All credit to these guys left and right. Just like Pete says, you know, they're all tough and they're all hard and they all push us. They go as hard as they can every single time, and we have the utmost respect for them. With guys like this, you can't hold anything back, right. Today's been our day in the race, but it's not been that way the whole year.

Was the goal to go out fast at the beginning of the race and were you concerned that the early pace may cause problems at the end of the race?

Matthew Langridge: Our race plan was to focus on what we've been doing. As Paul's said, we've not had the easiest of seasons. We try to not focus on what everyone else is doing and what we knew we could deliver. Part of that was getting a good start, getting back from the first stroke, and we just got our heads down and went as hard as we could the whole way. That's just how it panned out, basically.