After having a fantastic regatta, Gevvie Stone capped off her second Olympics with a silver medal. This is the first medal for the US in the 1x since 2008 when Michelle Guerette also took home the silver. Here is what Stone had to say on her way to the podium.

How do you feel about winning silver?

Stone: It's amazing. It's so funny because some people are unhappy because they didn't get gold. I'm so happy! I could not be happier. Kimmy's been on the top and to be that close to her, the silver medal, it's amazing.

Just take us through the race and what you were thinking and also feeling.

Stone: I just knew it was going to be a short race. You got to go fast off the start. Kimmy was out, but I was with everyone else, which was good for me. I'm slow at the start. At the thousand, I took a traditional 20 for the folks back home. After I took those strokes I realized how good I felt. At that point I knew that I was in a good place because my legs didn't feel it yet.

Then we had the cross chop and I could feel everyone else struggling a little bit. I was like, "Yes, this is Boston! This is what I want! This is rough water!" The middle 500 was a jam and Jingli traditionally makes a really good move of the 1,500. I knew I had to push hard past that. The last 500 was just go for it. I was channeling my guys back home. I felt amazing at the end. I was surprised I felt awesome. Then I tried to stand up on the dock and totally collapsed. My legs are more beat than I thought they were.

Who are you refereeing to when you said “your guys”

Stone: My guys... We're talking about the masters guys in Boston. Two in particular have this amazing sprint. They both went to MIT. The MIT boathouse is the landmark. They just turn it on there and usually have a lead. It's a matter of holding them off. Today I was just channeling that.

What were you thinking during the last 1500?

Stone: I thought about Jingli. At the 1,500 is where she walked through me yesterday. I know that she's not traditionally super fast at the line and she really makes a move out of that 1,500. I took a ten at 1,400, thinking about that and saying, I am not going to let her get through me again!

Have you had a chance to sort of reflect? You thought London might be it and then you thought, maybe I have a medal chance.

Stone: Hearing that I had a medal chance and people were saying that, it blew my mind. Just to be here, it's incredible. It's beyond my wildest expectations, racing in the single. This is amazing. 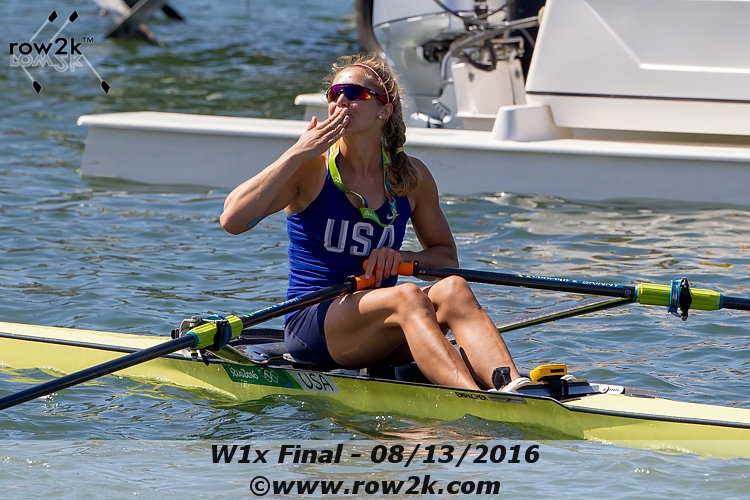 Looked like you were actually closing in on Kim the last hundred meters or so.

Stone: That's your call more than mine. I wasn't looking. [Laughs]

Do you feel like you really had strength in that final part of the race?

Stone: I think that when you have a lead like that, for me at least, it's easier to have the mentality, "Don't mess this up." I was fighting for it. Kim was far enough ahead that she could have thought, "Don't mess this up," whereas I had no idea where Emma and Jingli were. I knew they were close to me. I was thinking "You have to push for it" depending on where you are in the race and if there's a strategy to it. So, I thought Kim probably made the right call. She got across the line first.

Stone: There can't be a better way to go out. Sure, maybe a gold medal, but Kimmy deserves that. To be that co-star, I'm on top of the moon. I can't imagine a better way to end a career. This is pretty much as good as it gets.

Are you officially Dr. Stone now?

Stone: Well, officially I've been Dr. Stone for two years, but I've got to think about that more now.

Do you just totally shift gears to life after rowing now?

Stone: First I'm going to take everything in, celebrate, and enjoy it. I won't start my residency until June. This fall I get to do fall head races. I get to race in a single at the Head of the Charles. I get to race in the Great 8 and the Gold cup. I love rowing. Now that I have time this year when I'm applying for residency. I'm not going to give it up.