After an incredibly close race, Mahé Drysdale took home the gold medal in the men’s 1x for the second Olympics in a row. Croatian rower Damir Martin took an early lead in the final, but was passed by Drysdale in the 3rd 500. Closing on the finish line, Martin pulled even and nearly took back the lead from Drysdale as they crossed the line. Here is what Drysdale had to say after the race.

What was going through your head at the end of the race?

Drysdale: I knew I'd had a good race, so you had to be happy with the result. But, it was an agonizing wait. I knew a couple of strokes before the line, he probably caught me, maybe even passed me, and I just chucked on a few short ones and was just hoping. You know, I've lost two very tight ones the last two years, and to come away with one that apparently is the closest race in Olympic history, it's pretty special. 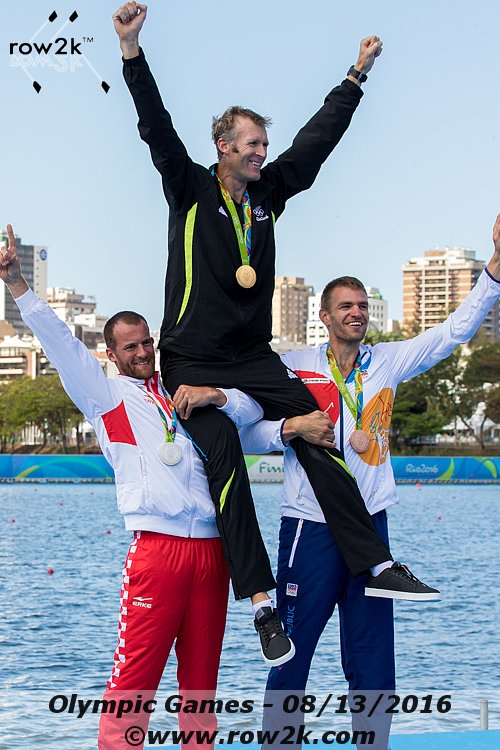 It must have just seemed like an eternity after that. What was running through your mind? Do you remember?

Drysdale: Yeah, it was nerve-wracking. You know, Damir turned to me. He said, "What was it?" I said, "I have no idea." You know, we're just looking at each other, looking at the board, just waiting, waiting, waiting. As I say, I knew that I'd put out a great race and I would've been happy either way, but obviously the gold medal is just that much more special. That was the goal that I've come here with, and to achieve it is special.

It's quite incredible to think that four years, all the work you've put in came down to that margin.

Drysdale: Yeah. It is. I guess those are the hardest ones to lose because you just think of all the what-ifs. But, this year has been a dream, really. I haven't had any hiccups. I haven't had any injuries. So I knew coming in here, I certainly had given myself the best shot I could. It was about performing in this one race, and to be able to go and put it on the line and do it. I raced really well. Last 500 I had sort of spent myself, but I thought I had done enough to get away. I found something out of somewhere, and that was a pretty incredible finish.

Can you describe the last 50 or 60 meters? Because Damir did seem to take the lead.

Drysdale: I could see him coming and I tried to respond. I just didn't have much left. Then you just get close to the line. It's just about stacking and strokes. I didn't look again. I just knew that I had to put in as many as I could and push as hard as I could. That was all I had. Had I lost that one, you know, I lost it. There was nothing more I could've done.

So, you think the difference was you put in a few more shorter strokes compared to him?

Drysdale: Maybe. I don't know. It was something I haven't really tried before. I've lost a few tight ones. I just thought, at least whack in as many as you can and give yourself the best chance on the surge. I think that's what it would've come down to.

How does it compare to London for you, this win?

Drysdale: London was special because that was the defining thing I needed in my career. This Olympics, I've been much more relaxed and enjoying it because I didn't have that pressure on my shoulders. I guess with the way the week came, there's a lot of pressure. You had to perform for the team and do it for New Zealand. We haven't had our best regatta and I knew how important it was. Certainly you only get a few opportunities in your life to win an Olympic gold medal. You've got to try to make the most of them and knowing how much Beijing hurt not coming away with a result. I guess you know how to win and that certainly helps in situations like that.