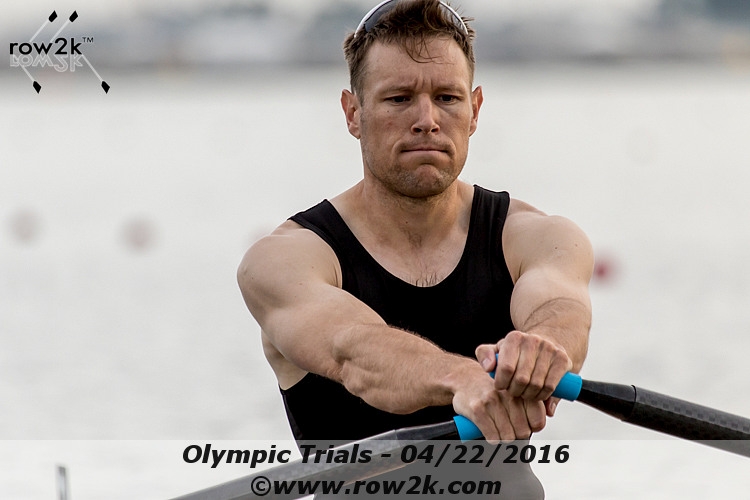 Before getting into details, as we did for the time trials, here are the World's Best Time percentages for the fastest time in each event in the heats today:

For Penn A.C. Rowing Association’s Justin Keen (Philadelphia, Pa.), being close to the top has always been just out of reach. After his heat this morning, Keen believes that his time has finally come.

Keen and his fellow competitors raced this morning for a few guaranteed spots in this weekend’s semifinals and finals at the 2016 U.S. Olympic & Paralympic Team Trials at Nathan Benderson Park. 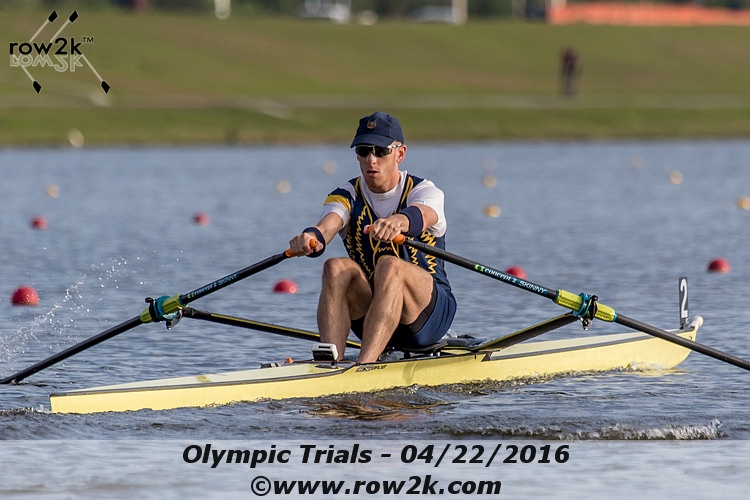 
In the first event of the morning, Keen took on his fellow training companion, Craftsbury Sculling Center’s Hugh McAdam (Hollis, N.H.), in the closest race of the morning in the men’s single sculls.

“Hugh and I have been training together for months now,” said Keen. “I knew he was going to want to race the whole (2,000 meters) no matter what. I was cruising in the middle thousand of the race, but I guess Hugh wanted to have a bit of fun and started to come back on me. It was closer than what I wanted, but I felt confident about my race.”

After his performance in the heat and being on the brink of making the national team for the past two years, Keen’s time in Sarasota has given him the confidence that his time might be close at hand.

“This has been such a great experience, not only as an athlete but as a person as well,” Keen said. “Getting the opportunity to learn so much has been amazing. I believe that at this level it is more about getting better, and the results are a byproduct of that. If you are lucky, that speed leaves you on top.”

Keen will have to compete against a field with comparable speed as Ken Jurkowski (New Fairfield, Conn.) took the first heat in a time of 7:02.29, while Greg Ansolabehere (Bakersfield, Calif.) of Potomac Boat Club once again posted the day’s fastest time the men’s single field, finishing in a 7:01.99.

After posting the fastest time in the time trial on Thursday and clocking a 7:41.43 in her morning heat, Southern California Scullers Club Stesha Carle (Long Beach, Calif.) knew while she might not have posted the fastest time again this morning, the opportunity to rest her legs was something to celebrate.

“I will definitely be enjoying this afternoon off, even though I will be here practicing all the same,” Carle said. “Once less race if it saves the legs – can’t be upset with that!”

The women’s single sculls races proved to be full of excitement as Vesper Boat Club’s Lindsay Meyer (Seattle, Wash.) came back from Southern California Scullers Club Kelly Pierce’s (Oakton, Va.) open-water lead with 750 meters to go to overtake Pierce by less than two seconds with a time of 7:41.50.

Cambridge Boat Club’s Gevvie Stone handedly won her heat after posting a time of 7:40.38, more than 10 seconds ahead of the next crew. 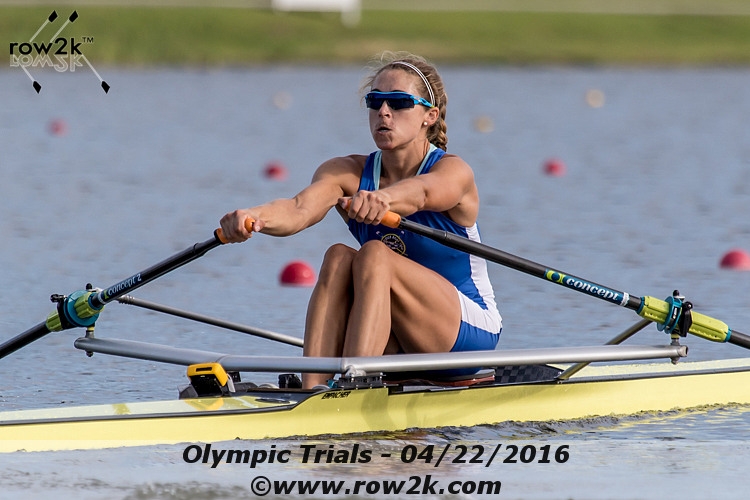 In what will surely be an exciting final on Sunday morning, the winning crews of the two heats of the men’s double sculls posted nearly identical times during this morning’s races.

In the first heat, Craftsbury Sculling Center’s William Cowles (Farmington, Conn.) and Stephen Whelpley (Mequon, Wis.) recorded a 10-second victory over the next crew, posting a time of 6:27.07.

Similar to their Craftsbury competitors in the previous heat, Vesper Boat Club’s Lenny Futterman (New York, N.Y.) and Jonathan Kirkegaard (Philadelphia, Pa.) put more than 15 seconds between themselves and their fellow competitors to finish with a time of 6:27.46.

Not to be outdone by its men’s counterpart, Vesper Boat Club’s women’s double of Nicole Ritchie (Dummerston, Vt.) and Mary Jones (Huntsville, Ala.) won its heat with a time of 6:54.23 to advance to the final.

After qualifying the boat for the Olympics at last year’s world championships, the composite crew of USRowing Training Center – Oklahoma City and New York Athletic Club’s Ellen Tomek (Flushing, Mich.) and Meghan O’Leary (Baton Rouge, La.) took its first step to earning its place in Rio by winning the second heat with a time of 6:51.96. 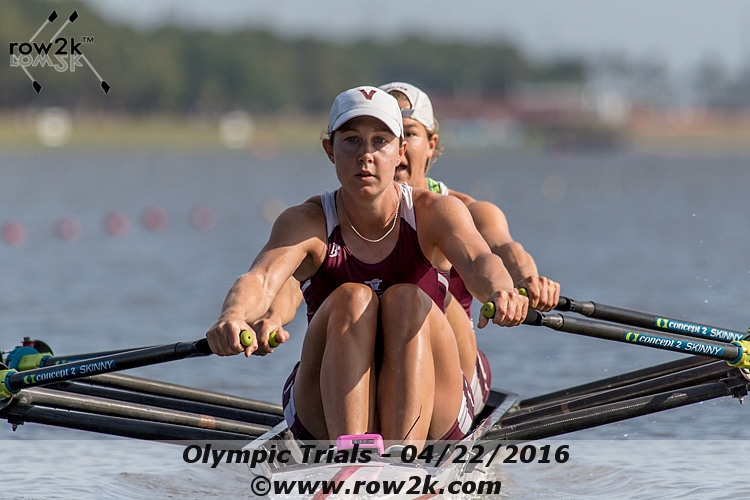 For Cambridge Boat Club’s Andrew Campbell, Jr. (New Canaan, Conn.) and Joshua Konieczny (Millbury, Ohio), winning trials in the boat that the duo qualified less than a year ago is the most important thing this week.

“It would be great to win,” said Campbell. “We have been training so hard together, and I truly believe in this lineup. Sunday is going to be exciting.”

The Cambridge crew took the second heat with a time of 6:23.02, while the unaffiliated lineup of Austin Meyer (Cohoes, N.Y.) and Nick Trojan (Los Alamitos, Calif.) posted a time of 6:17.39 in the first heat. 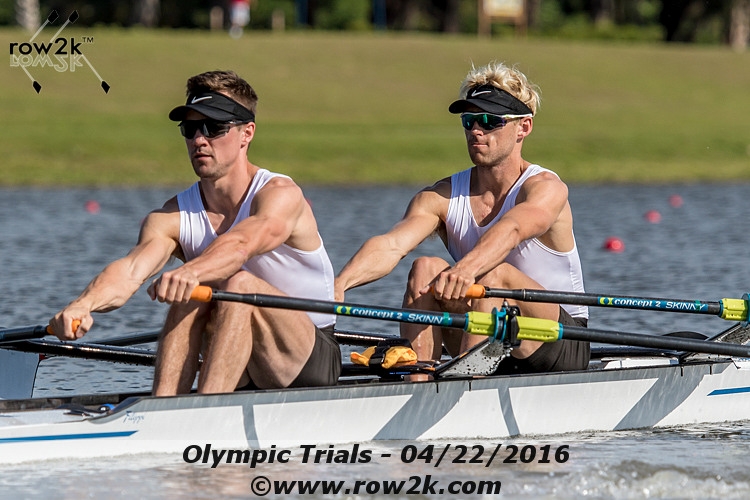 Sarasota Crew managed to hang on to its lead until the crews passed through the 1,250-meter mark, where Riverside made a push to finish with the top spot in a time of 7:02.70.

Repechages for the men’s and women’s single sculls will begin on Friday afternoon at 4:30 p.m.