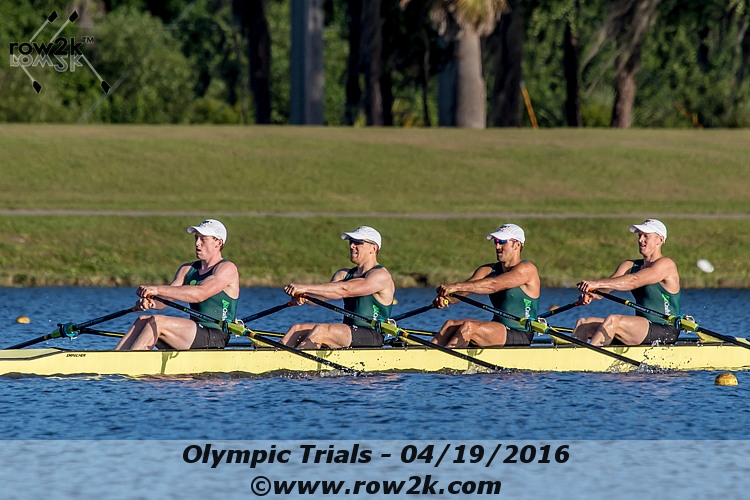 After weeks and even months of anticipation and uncertainty, it wasn't 300 meters into the race that the Craftsbury Racing Center men's quad had blasted out to nearly a boat length lead on the field by 500 gone and never looked back. The blistering start was no accident, as the crew, consisting of Peter Graves at bow, John Graves at two, Ben Dann at three, and Ben Davison at stroke, already have their minds on the crews they will face at the "regatta of death" Final Olympic Qualifier Regatta (FOQR) in Lucerne next month.

"Historically at least, we know that in the quad it's a drag race off the line," bow seat Peter Graves said after the race. "In our international racing, any races where we've been down off the start have generally been bad. So it has been a focus all year to make sure that no matter what pace we're going to be going for the rest of the piece, we need to be getting off the line fairly quickly, without much drama."

Echoing his brother Peter's focus on international tactics in the quad, two-seat John Graves made the focus on the FOQR even more acute, mentioning Russia, one of the top crews that will race there.

"A call we make a lot in practice is that if Russia is next to us, we need to race like Russia is next to us," Graves said. "We didn't do anything other than try to row the way we're going to need to against those crews. I think our plan was to row pretty internal to just maximize our boat speed we were kind of... have a contingency later in the piece to see where we are and then go from there."

Unlike last year, where the group dabbled in singles, doubles, and quads well into the spring, the crew came together early and got to work.

The major difference this year is that we picked this boat basically after last year's season ended," three-seat Ben Dann said. "We said this is what we're going to do and we're going to start now; there's no fooling around from this day on."

"To add to what Ben said, we felt that win, lose, or draw at all the big trials, we wanted to feel we are putting out our best," John Graves said. "We all felt confident in each other if we gave it time, and if someone were faster us they'd be a really fast boat and we'd be okay with that. But what we couldn't live with is making a boat at the last second and not rowing to our potential. If anything we were trying to make sure that when this is over, we did everything we could, and we'll live with the result."

The men's quad has featured perhaps the most intense inter-club rivalry in the country for the past couple years, with Craftsbury and the California Rowing Club racing nearly even last year, and anticipation of this race was high. This time it went to Craftsbury, and they are not unappreciative of how hard they had to work for it.

"I was racing against CRC in 2009 so it's been going on for a while," Peter Graves said. "There are some different faces, but I always hold them in high regard. I was pretty torn up when we lost trials last year, and I've been waiting for the next opportunity; it's been eight months and it's been a long eight months There's no mistaking that I absolutely was thinking about that today and about beating them, I will say that. I've done a lot of work and they definitely upped my game, so we've got to thank our competitors for that." 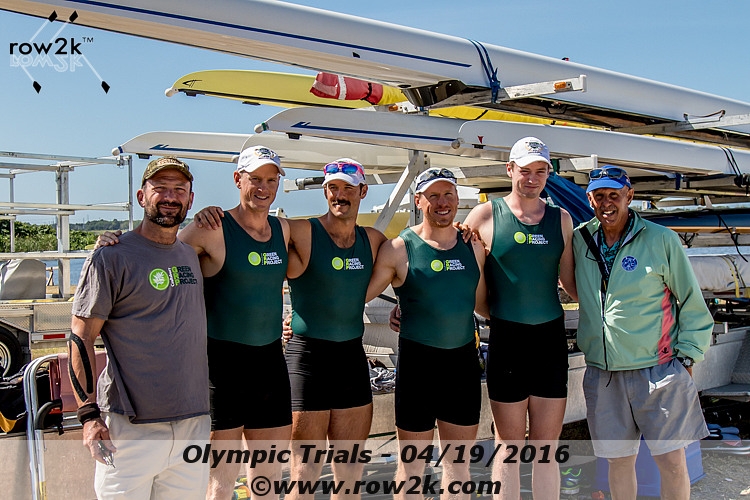 From here, the crew returns home to train to get ready for the FOQR, at which they must place top two to qualify for the Olympics. They are hoping to train alongside some of the collegiate crews that have let Craftsbury tag along at practice to get some racing in.

"If Wyatt Allen is listening in, we'll see how he is doing up in Hanover," Peter Graves said with a laugh.

"In the last couple of months is there have been a lot of really gracious college coaches and college eight that have allowed us to jump in on their practices," Dann explained. "Like Peter said, if we can find an eight to do pieces with, that's been really helpful. "

Until then, they'll breathe a little easy for a few hours, though partying isn't really in the cards.

"We'll get back into the thick of training pretty quickly, so maybe have a Gatorade or something," Peter said.

"Well, he (indicating Ben Davison) is nineteen, so not too much partying," John said.

"Maybe I'll have a virgin Shirley Temple and maybe they'll all take a sip of Guinness if we're feeling really bold," Davison said.