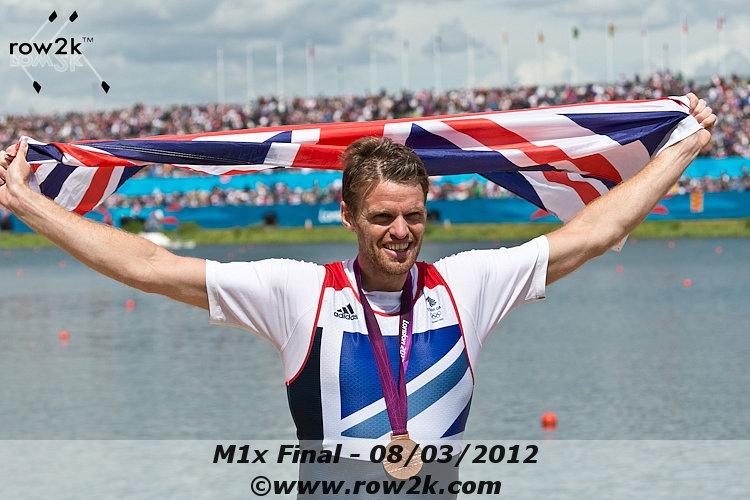 Alan Campbell after winning bronze in the M1x

As the interview begins, Campbell is discussing the finish of the semifinal, in which Ondrej Synek had sprinted in the last couple hundred meters to take first in the three-to-advance race.

Alan Campbell: I think it was a case of he was just willing to do whatever was required today to win that race. I'm a little more content just to make sure I'm in that final and in the best shape I can be in. I will step up again before the final.

[Interviewer]: It sounds as if you've grown up.
(Laughter)
Campbell: I'm 29, it's time! Getting married this year, it's mellowed me out a little bit.

[Interviewer]: (Inaudible 0:00:45).
Campbell: It's also that you know these guys are the best in the world. And so it is a tight field to be, so whoever wins it, it's not going to be like a victory where they're four lengths in front or anything like that. It's going to be a tight race the whole way, and it will come down to minimal margins at the end.

I mean, you just saw what happened with the men's eight. The boys, they went on to win it and fortunately ended up with a bronze, and if maybe they had just tried for silver, they would have got it, but, why bother - well, I'm not saying why bother, but why not take the risk and go for the gold? They had to go, they had to do it. They were the closest anyone's really got to putting the Germans under that sort of pressure. I mean, no one has actually lead the Germans 1200 meters. Definitely not. I think the rest of us can take a sort of immense amount of… sort of a good example of how to go out and do a race.

Ed Hewitt: Were you surprised to pop out so far in the beginning parts of the race?
Campbell: Yeah, I was...I didn't think, I thought Ondrej was going to go a lot harder with me in that first bit. And then I think he sort of maybe just held a bit in reserve and then he pushed in to very strong middle thousand. That third 500 he did, he took a length at that point and he just got the nose in front. It was at that point I was like he's gone quite strong in that. I mean, if we look at the splits from all the other races, that's the fastest 500 from anyone, at any point. I was still the second quickest in that race in the third 500. I think it was actually quicker than the other race's third 500. Obviously conditions are up and down, you can't read too much into it. But he put in a strong push at that point,and my job was then to sort of make a call. I made the call to not hurt myself and not to sacrifice anything for that final.

Hewitt: You're a lot lower by the end, yeah?
Campbell: Yeah, we were like 29.

Hewitt: That's what I figured.
Campbell: Yeah, it was pretty low so… we cruised over the last 300 or so.

Hewitt: Racing in an event that is, I don't know, eight or nine guys deep for the medals, what do you think when you see something like the GB women's pair take off and win by lengths; and then there is the New Zealand men's pair, these sort of dominant crews, where you are in an event where nine guys could win, very different.
Campbell: I think, you know, these are obviously different events and everything that goes with that, and if you look at the Kiwi pair is what they've done is they've created the aura around themselves to shut everyone else out of that event. No one else wants to race them, nobody wants to go in and have that race knowing that they can't... people don't feel that they can win against them. But you know our women have been silver medalist twice, and they've just worked immensely hard, and they fully deserve the win they got today.

If nothing else, maybe the depth beyond that top six maybe isn't as strong as we have in the men's singles. But the thing with the singles is there's nothing that holds it back. It's not a case of who has good funding, who has... all you need is one guy and a boat and a coach and that's it. That's why Azerbaijan have made the final in the men's singles. You know they have one guy who is very strong, who is very talented, and he's got a boat and a coach and that's why, there's very few events where that can happen.

I mean you look at the singles; Xeno Mulller from Switzerland, Karppinen from Finland, it's a case where there's been some smaller and more maybe obscure countries finding one good individual, and every country can find a good individual. And again, it's the best individuals from each of those countries that are racing each other, and that's why it's maybe got a bigger depth and breadth. But you go all the way to Niger, and there's a vast difference. He was very lucky, obviously, to get in here, but I think he's embraced the Olympic spirit. I think it also shows people that there is a big difference between a guy starting out and professionals.

Hewitt: Right, guys who can make it look easy.