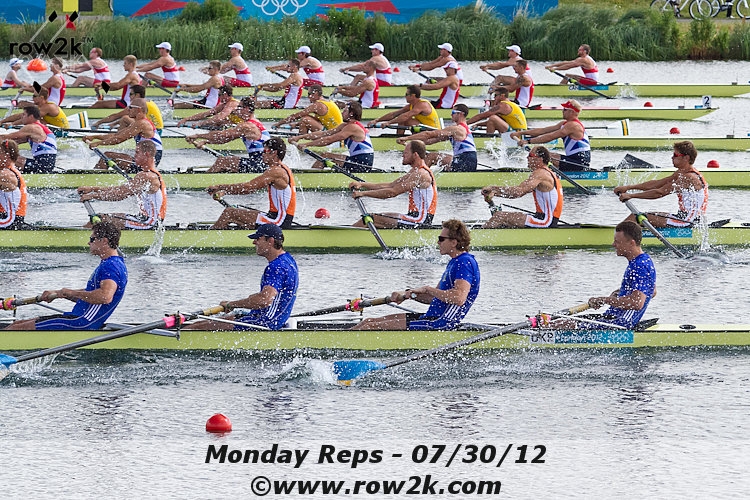 M8+ rep blasts off the blocks

What a wild day – two Olympic records fell(GBR W4x and AUS M4-), and numerous crews suffered major crabs, one of them that ended their Olympics entirely, whew.

The crab in the NZ women's quad was so bad that they broke an oar, the US men's pair got thrown into the buoys, and the US men's quad missed advancing to the semis – and with 13 crews in the event, their Olympic regatta has come to an end.

After the race facing the press, the guys in the quad mostly said "someone caught a crab," but when he showed up, Wes Piermarini took full credit and responsibility for the crab, taking it off his boatmates, and taking the heat. After a race and happenstance like that, there is nothing you can do to undo it as an athlete, but there are things you can do to make it right as a person and human being, and Wes did just that. It took some stones, and as hard as the crab was to witness, his reaction was just as admirable.

In the men's pair, the crew was having a pretty smooth row in the conditions overall, until a rapid-fire cascade of events threw everything into jeopardy.

"We got hit by a gust, and our reaction was a little tight," Tom Peszek said after the race "Silas's blade jammed in the water a little, then we went into the buoys… all at 250 to go, so we gave everybody a little show. We got through, and though it wasn't the way we wanted to do it, that is the important thing. We'll get a little bit of a ninja line for the semi, but that is okay. You never know about those lanes, you see crews take races in them all the time."

In the final race of the morning, the US men's four joined the Australian and GB fours with heat winner honors, some pretty rarified company. They did so rowing what did not really look like a full pull, as they crossed the finish line at 34 spm, despite the Dutch being not too far behind. The semis are going to be gnarly, so it's good to think they have another gear.

The men's eight rep was a heater- in the end, a blanket finish, and a rep that was all one could hope for from any 6 boat eights race at the Olympics, because clearly there were medals on the line here, even if it was "just" the rep.

The US women's quad took the long route to the finals, but while they are now two for two on going second, they are also two for two on racing right at the front of the pack, with at least two of the crews (GER and AUS) that are (also?) clear podium favorites.

The starter for the first several races of the day pronounced a couple English language sounds a bit interestingly – I was looking around for the Monty Python troupe to show up. I suppose it's not a kind thing to say, but the starts were being broadcast to the crowds, and I was one of thousands thinking it, and a whole lot of people were whispering it – so maybe I am just stupid enough to put it in print.

Some folks remember a recent Video of the Day on row2k that showed the Aussie four in training, with a massive finish pause that looked more like a drill than their normal rowing rhythm. if it is just a drill, they have done it a lot, because the pause sticks around even at cadence – if you can, watch again the start of their race, and you can see the pause even on the racing start. It is uncanny. Obviously it doesn't slow them down, as they set a new Olympic record today, even in that crosswind, which Drew Ginn notes (via his blog) almost blew the Aussies out of their lane, even on the way to an Olympic record.

Best story from back home: the following exchange took place between a seven-year-old boy and his rowing coach dad, while watching Heat 2 of the women's eight on Sunday morning (and, mind you, this youngster didn't even know that Georgeta Andrunache from Romania is rowing's most medalled Olympic rower with six Olympic medals, including five golds):

Boy: "Romania should be the best team in this one"

Boy: "Because they are called 'ROW-mania.'"

Hard to argue with that logic, no question.