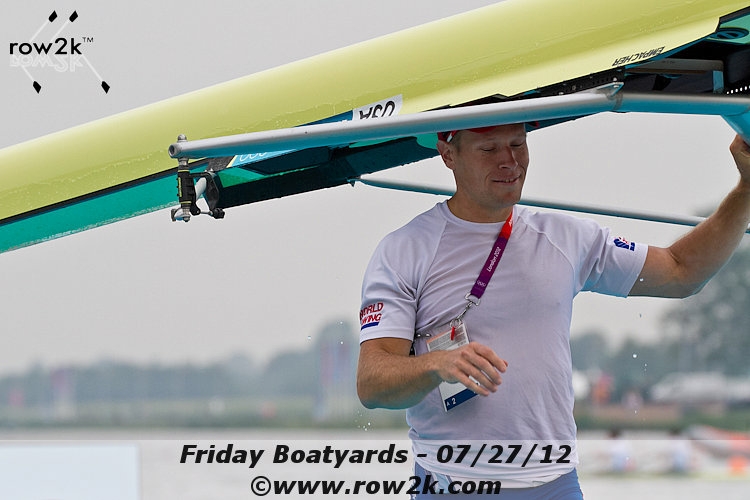 row2k: Here we have Ken Jurkowski putting away one of his boats. How many boats do you have to have to be a single sculler at this point from the US?
Ken Jurkowski: Well I'm sure there are other possibilities, but for me, because the racing is held on the west coast, and on the east coast, and then obviously the goal is to race in Europe, I actually own three boats. I have two boats that I bought in 2008. This boat here that I just won trials in is actually the same hull that I raced trials in 2008. However, between now and then, it's only come out for the occasional NSR on the East Coast so it's relatively new. The other hull that I've put most of my mileage on for the last four years has been on the West Coast and California where I train at Cal Berkley. And then this year over the winter I made arrangements to buy a boat in Europe from Empacher so that I could have consistent equipment for the World Cups and World Championships, or in this case, The Olympics.

row2k: As we were talking about earlier, just because it's the same boat doesn't mean it's the same deal with rigging, feel…
Ken Jurkowski: Yeah they all measure the same and they all look the same but there are always very subtle differences. Each boat has just a little different feel and is unique in its own way. So that was one of the big goals for me in terms of going to race the World Cups, was just getting to spend about a month rowing that hull in Europe so that I could get it dialed in and feel comfortable in it so I'm not trying to figure that out at the last minute before the big race, which is in London.

row2k: And that boat is headed to London?
Ken Jurkowski: Yes. I mean, I have, it's all...it's the same situation. You know I have it all covered and everything taken care of on it and Adrias Maul, the US boatman, transporting for me. So he's bringing it to London.

row2k: And then there are blades. No two sets of blades are the same.
Ken Jurkowski: No, no two sets of blades are the same, I've owned way too many blades, by somewhat of a necessity. For example, in 2011 I bought two sets of identical blades. I brought one set to Europe, and when I arrived in Europe this year in 2012 the set I had over there, the one blade was warped and the sleeve was twisted or something. It was completely unrowable so I ended up investing in yet another set of blades. I could probably add it up, the total of oars I've owned. I've probably owned like seven or eight sets of oars. Way too many. Just cumulative over time.

row2k: Talking about the World Cups this summer, NSR World Cup races, trials, Olypmics...how did you reckon or plan for a summer that could look like the one that you are going through now?
Ken Jurkowski: Well, you could see it coming because of the layout of the selection procedures way back in October, September. So planning for it really comes down to acknowledging that there's going to be a lot of steps in the process. For me the NSR was an important first step. It was important so that I could have the opportunity to race the World Cups. My approach is different than what most people in the US think the approach of going to World Cups is. A lot of the US mentality seems to be designed around "oh, we need to go to the World Cups and have absolute peak performance." I find that not to be practical because there are a lot of steps on the way, and if you try to peak for the World Cups, you're going to end up compromising the rest of your season. And so last year in 2011 I went out of my way to do all three World Cups and without peaking, just by doing my usual training and gaining from my race experience. So I was able to really find a lot more speed than if I was training at home.

So this year going to the World Cups was an opportunity to again get some race experience, get some time in my new boat. But I wouldn't say I was going with the plan being to qualify, or I wasn't trying to peak for the races in order to qualify, because then I wouldn't get the same experience and benefit out of it, because I'd be treating it like it's the last race of the season. You need to have a little bit more of a long range outlook. So as I said, having laid out the schedule way back in September, I knew I'd have quite a few race opportunities between the start of the season and the NSR, and hopefully the end at London. So I really was just trying to have consistent performance and really learn from each opportunity out. A lot of people put a lot of pressure and expectation on the international performance because they don't happen that often. My goal is to make international performances more of a regularity in the schedule so I can really find what I need to do to be competitive.

row2k: Did you half expect then to come back and row trials here?
Ken Jurkowski: I'd say it was always on the schedule. I'm not trying to say that I wasn't confident going into my racing in Europe. I put in a lot of work and a lot of training in this winter. And I had my all time best performances in terms of absolute time, and I think as a race performance in Belgrade when I went stroke for stroke with Lassi Karonen, who is one of the most consistent and top level scullers for the last number of years. We went all the way down the course, and went 6:46, which is my best time to date. So that was a really good step forward. I think I've got a ways to go in terms of really closing the gap to the top guys, but it's definitely a difficult event and it's the competition that makes the quality for it. I'm not going to be deterred by it being challenging. I've just got to figure out how to improve and how to get more out of my performance.

row2k: How does a single sculler go to approach their training, tapering? Do you have any thoughts on that that people would be interested in?
Ken Jurkowski: Sure. I think one of the biggest things that makes single sculling different than the other events, especially the events like the eight which is sort of the other end of the spectrum, is that in single sculling you're going to count on having four races at the Olympics. You're going to have a heat, a quarter final, a semi-final, and a final. So the eight being the other end of the spectrum, if you win your heat you go straight to the final so you just have two races. So with twice as much racing in the same amount of time, you really need a different preparation. You need to focus on being able to put out a consistent race form over back to back days, and that definitely lends to doing a lot more volume and sort of your whole approach has to be a little more meted than an eight, where you just go all out and it's a five minute race. So I think I have to sort of take a broader scope in terms of developing my approach and my training, because I need to be both really, really fit to be able to race that many times, and I need to be really, really efficient because it's just a lot of times down the course and a lot of strokes. That's really what, that's the stuff that people don't appreciate or don't think about going into the different events.

row2k: Yeah, it is interesting. When talking about peaking, for sure most people don't have to consider doing it four times in a week.
Ken Jurkowski: Yeah, if you try to peak at the beginning of the week you'll be in pretty serious trouble by the end. So you really are trying to be as efficient as possible to get through the races and have performances that will obviously advance you without sort of putting yourself in a hole that you can't climb out of by the next race.

row2k: That's all I have. Do you have anything of interest?
Ken Jurkowski: No, I think that's about it.