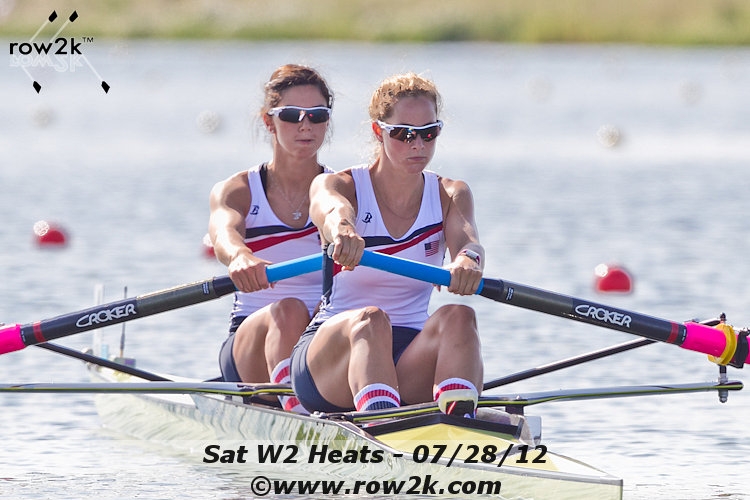 Now that is an Olympics opening day - it was so good that even NBC put us on for 30' within a few hours of the end of racing!

To start the day, the US women's pair, America's undisputedly greenest crew went out for their 9:30 heat in the very first race of the first day of the Olympics, and slotted themselves a spot in the A final with the second best time of the regatta, bested only by GBR, who set a new Olympic record of 6:57.29 in the offing.

Also in the offing, the US crew also broke the old Olympic record as well.

Maybe it was the serious matching sock mojo they were working this morning; you never know.

Yeah, you read that right – to kick off the 2012 Olympic Games, Sara(h)s Hendershot and Zelenka also broke the previous Olympic record, which stood since Atlanta in 1996 (7:01.39, set by Megan Still and Kate Slatter of AUS), with their time of 6:59.29, two seconds behind the Brits.

And the tailwind hadn't even really kicked in yet; wow.

In yesterday's report, I mentioned a "heavily favored" crew who assessed the conditions as "fast water," but I didn't mention at the time that the man who said it, Eric Murray of the NZ men's pair, also predicted they would break the world record when he added "6:13!!" – the old record being Cracknell and Redgrave's 6:14 set in 1992.

Well, by the time 6:13 came around, they were two lengths over the finish time, having smashed the world record by six seconds with a 6:08.5. That's a record that stands a chance of spending 20 years in the books, as did the GB pairs – or perhaps more. When I mentioned the other day they were holding off a straight four for a spell, I wasn't exaggerating.

At the end of the day (not my favorite local phrase, so I'll try to use it literally to put it back to good work), four Olympic records fell, in the men's and women's pairs, the men's double (NZL Nathan Cohen and Joseph Sullivan), and the men's single (Tim Mayean of Belgium) – and the Kiwi M2- is also a world record.

By now everyone knows that the US men's eight won their heat; talk about another unexpected result. It is not unprecedented for crews that went through the Olympic qualifier to do well at the Games just a month later; they tend to be a bit battle-tested, under the most desperate of conditions, which does not hurt. Straight to the A final in an event in which the US didn't even qualify for the Games last year – not a bad start.

For the USA singles, both Ken Jurkowski and Gevvie Stone paced their races nicely and advanced straight to Tuesday's quarterfinals. Both placed third this morning and were comfortablly ahead of fourth place to avoid the rep.

On 10 minute centers, the camera on the 7-ton wires hanging over the course was challenged to get back to the start in time for the next race, and zipped overhead making alien invasion noises often as the crews were within the two-minute call. You'll notice in the galleries a number of athletes looking up at the sky – they're trying to figure out what is making the noise.

There are a bunch of identical twins racing at these Games, in the US men's eight, at least a couple pairs spread around in the light men's four(NED and GER), a Greek pair, and a few more. None were split up in the boat – all the twins sit together.

Style points go to Frida Svenssen of Sweden, who is rocking a huge light blue bandanna, with her sunglasses put on over the bandanna.

On the first day of the Games, it is fair to expect transport chaos, but at least the early birds who headed to the course found anything but – buses leaving every minute, security folks keeping everything moving, security on top of things; it was impressive.

Tromping into a rowing event surrounded by heaps and heaps of people is truly a novel experience; the grandstands weren't quite full, but I suspect that was because everyone in attendance can wander the entire upper end of the course, to within a couple hundred meters of the start line. As a result, there were hordes of people all along the course, hanging out, cheering, taking pictures of one another sitting inside the giant Olympic rings; this has turned out to be a great venue.

And the crowds are great; the GB crowds are cheering on their own, obviously, but they are also showing tremendous sportsmanship, cheering on the slower scullers in some of the singles heats all the way to the finish line.

Given the world records, obviously today the dreaded crosshead winds were entirely absent, replaced by a direct tail that was extremely fair, and the bumps on the water toward the finish were not really a challenge for the crews. Fast water!

The pick'em is now closed, obviously – but it's worth mentioning that we took the predictions of Brian Cazeneuve (of SI) and made a fake Brian Caz entry – we'll see how he does. Good luck to all the participants, and especially to the athletes!