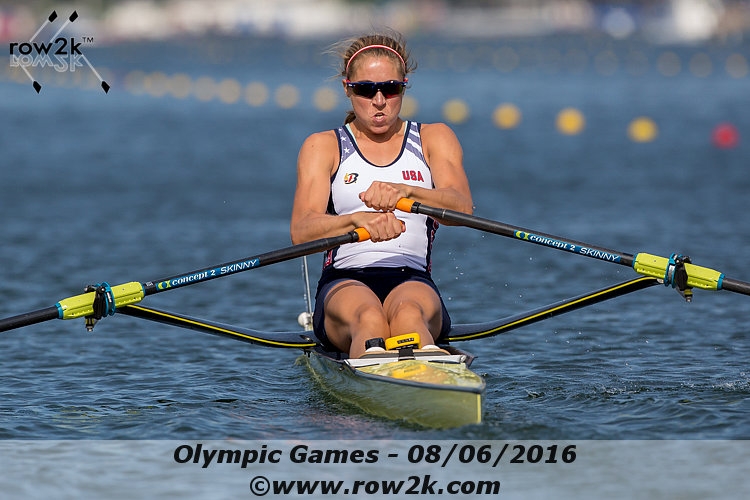 Stone in the early going (and good water) this morning

By the time the women's singles started coming down the course, the third 500 was more of a survival situation than a boat race. US women's single sculler Gevvie Stone won her heat in the morning, but admits she could have as easily ended up swimming. We caught up with Stone after the race.

Stone - At one point during the race my port oar was parallel to the boat, and I was like, I am going in! I managed to rescue it. The first 500 was fine. The second 500 was windy. The third 500 was just... There were these swells that would just crank the boat around 45 degrees, and there was nothing I could do to stop it. And it would stop me, and I would try to get straight in the lane, and there was one point I think I was in Lane Negative One.

I knew that I was up by a lot at the 1000. The water in the second 500 is water that is like Boston, so I felt like I was doing okay. I had a big lead and I thought, okay, there they are. I can see all of them. And then I stopped and I was like, okay, I knew they probably gained on me. Get it back, get it back. And then I stop again and just hold on. And then coming into the last 300 meters or so, it was rowable again, so I thought just go for it. We were just sprinting neck and neck at that point.

row2k - With all that water that was in your boat, was it like weightlifting? 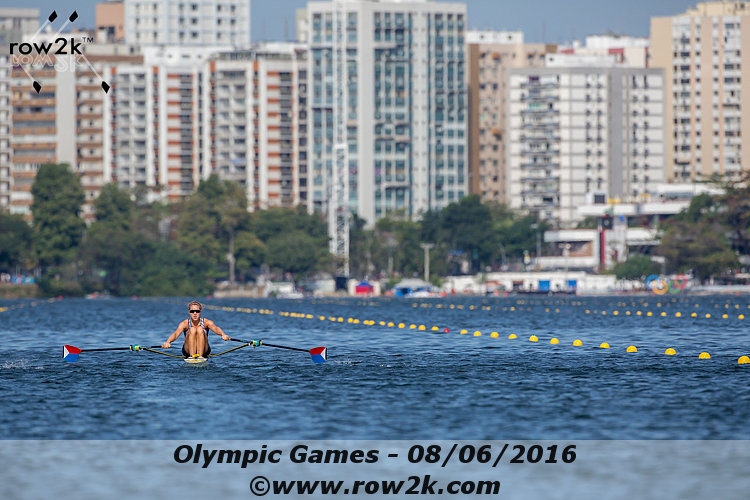 Heading into the dicey stuff

row2k - You were in the center of the screen when a big wave rolled right into your boat.

Stone - There were a bunch. I feel like I'm wearing a bathing suit right now. I'm just totally soaked.

row2k - You swamped, but did you think you were going to flip?

Stone - I thought I was going in at one point. I was swamped, and then there were two points where I was like, I am going in! I'm going to flip! But I managed to recover. [Laughs]

row2k - So, better or worse than the basin?

Stone - The third 500 was worse because in the basin, you just don't get swells like that. The first 500 was fine. The second 500 was basin-like. The third 500 was just these massive waves, it was like ocean rowing. I came in and was talking to C2, and asked if that was worse or better than at Euros in Brandenburg? They said it looked worse. And I thought, Oh, phew. Because I did not feel like I was going well.

Stone - A 10 would've been that whole way down the course like that. But there was a row in Ireland where the wind picked up like that, and in Ireland if you get a tailwind, it's also in the direction of the course. There was one day we were upstream of the course and then came back, and the wind picked up, and it was like this, and it was 40 degrees and like this. Temperature also makes a difference. Forty degrees would make it a ten.

row2k - How did you feel when you finally crossed?

Stone - I didn't know who had won. I mean, the last 250 was just kind of relief. It was like, okay, I can row again. Like, just go. My forearms definitely were seized, crossing the line. I honestly don't think my forearms had seized since I was in high school. My mom was my coach then, and taught us that if you write the alphabet with your hands, like big letters, it releases your forearms, and it really does work. So, you just go through the entire alphabet. That's what I was doing. I was going through all 26 letters. Yeah, it was just the alphabet.

row2k - How big was the sense of relief?

Stone - Since all the races were so mixed up, the quarter final draw will be very interesting. So crossing line first is a relief, but maybe not the advantage that it would be, because not everything went as seeded.

row2k - You know how you're sitting on the line first race of the Olympics, you've done it before, you've got a certain feeling, like, did you have that feeling and then what happened?

row2k - What was your mindset in the second thousand?

Stone - I got my forearms worked on. [Laughs] Now I head back and I'll go eat something and cool down, and probably should get some work in, because that race wasn't your typical 2K effort, so getting a little bit of work in this afternoon. Then I'll race again on Tuesday.

Talking to my dad, he was saying that depending on which boat people row in the bigger hulls are more an advantage in this water, and watching the Euro champs in Brandenburg, the Latvian was going to flip, but she had more of a splash guard and it was definitely an advantage. He is attaching a splash guard to my boat right now. 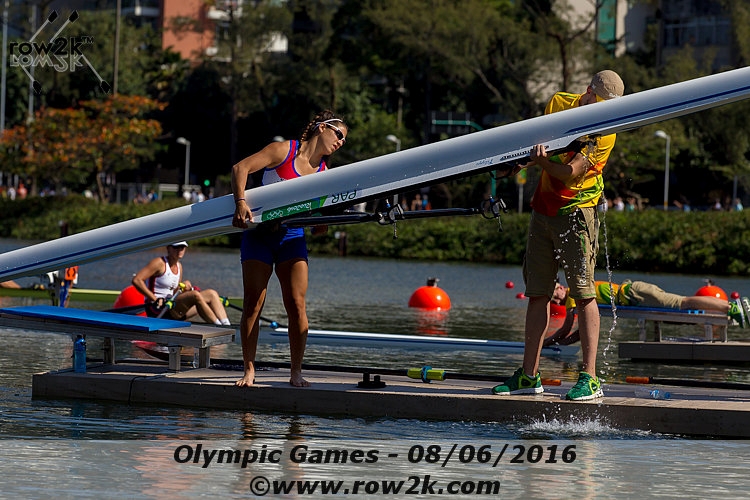