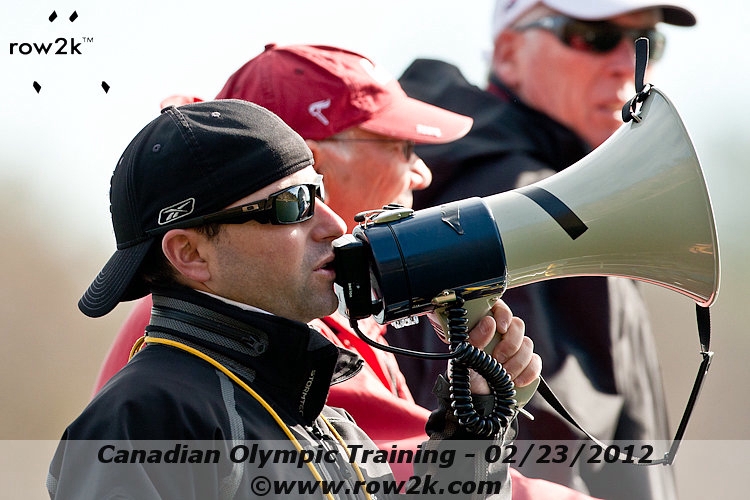 Coxswain Brian Price of the CAN M8+

1. What inspired you to go to your first rowing practice; was there anything memorable about it?
As a kid at age 12, I was a huge fan of the '88 Olympics. I collected pins, hats, newspapers, bottle caps....anything that had the Olympics rings on it. By 1992, I was recording everything on a vcr and saving the tapes to watch later. I remember seeing the Canadian Men's Eight win gold in a really close race and this little guy jumped up into the arms of a big guy and I thought....I'm little....I could do that! (it was Terry Paul jumping onto Derek Porter) That fall I went to the Quinte Rowing Club in my hometown of Belleville, Ontario alongside my mother and when she was told that I had to be at 5:30am for practice, the start of my rowing career ended before it even started! She said "I'm not taking you to practice at that hour!" A few years later I had my own car, so I could drive myself and I never looked back.

2. Was there a practice, race or other event when you fell in love with the sport, or when you knew you might not be too bad at rowing? When you thought you could make the national team?
At the beginning of my rowing career I never really liked getting up early in the morning, but I always did it because I knew that as soon as I got out on the water I would be exactly where I should be. As I called out commands to the crew, the boat went faster and I had to think of something else to make it go faster still....it was a relentless pursuit of speed, it was never fast enough. The challenge of trying to be the best in my club, then province, then the big jump to the National Team was one that always enticed me. I always just wanted to see how good I could be at coxing.

3. Best race/practice, worst race/practice?
Shawnigan Lake, which is 40 minutes north of our training centre in Victoria, has been the site of some of my best and worst practices. The lake is 7km long and for many years the National Team would take two eights up there every Thursday during the winter to do battle. I always knew it was a chance to earn my seat and gain respect of the rowers. I recall getting screamed at by athletes, yelled at by coaches, but I also remember the many times that I had everything under control, including the other coxswain at times. One time in particular my strokeman said to me "you are out-coxing him on every single level right now....nice job" That felt real good.

4. Best/Anything you've done in the sport no one knows about?
In 2000 I raced the coxed pair at the Lucerne World Cup Regatta for Australia and won a silver medal. I was there coaching the Canadian U23 Men's Pair of Kevin Light and Joe Stankevicius who were racing as the 2nd entry for Canada. The AUS cox was unable to do both the Eight and Coxed Pair as they were too close together and our team manager overheard this conversation and mentioned I was available (I was ranked #2 in Canada at that time). Funny thing was the AUS coxed pair entry was also their U23 Pair whom we would be racing three weeks later. They handed me their race plan and I never said a word about being the U23 Canadian coach. I recall their slight disbelief when they saw me at the U23 regatta :) My boys finished 2nd at U23s and AUS was 5th.

5. Any/Most important advice for young rowers?
We've all had the lows when nothing seems to be going right but it is your ability to rise above and persevere through it that will determine how good you will be. Early in my National Team career I wondered if I would ever have the confidence to command the boat on a daily basis, but slowly and surely it came. Great saying I once heard was "don't get too high on the highs and don't get too low on the lows". Easy to say....harder to implement.