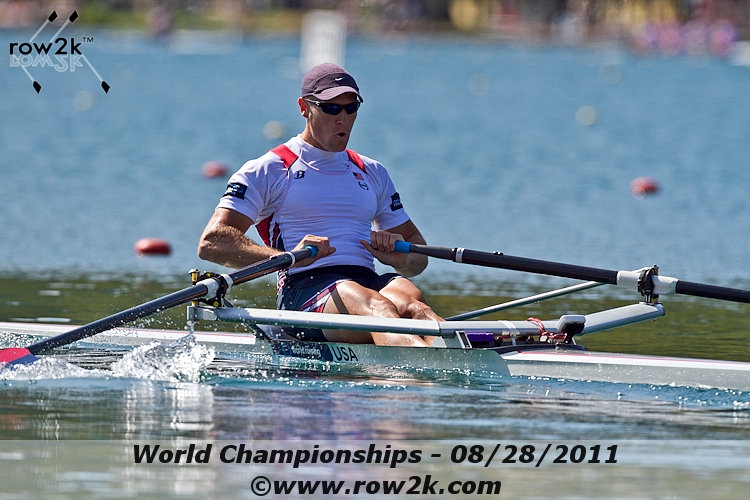 ed. note: an earlier version of this story indicated that four Paralympic berths were available in Belgrade; the correct number, per event is two.

The road map has turned a page--or two--moving on from Chula Vista, site of the National Selection Regattas and the Non-Qualified Olympic Trials, and turning towards Belgrade, site of the first World Cup for 2012. Now that many--though not all--of the athletes vying for each crew have been selected, we wanted to provide an update on what the next steps to selection will involve.

To Belgrade, then, where starting this weekend at least two US crews angling for selection in the already qualified events can sew up their Olympic spot extra early--the obvious perk being the chance to get back to training for the Games themselves without the prospect of an open trial in June.

The NSR winners headed to Belgrade to take the "qualify at a World Cup" option are Ken Jurkowski, in the Men's Single, and the Light Women's Double of Kristen Hedstrom and Julie Nichols. Both can qualify with a top four finish, so job one will be racing into the A final, before digging in to fight for a spot in the top four.

The Women's pair of Erin Cafaro and Elle Logan, one of two USA W2- crews entered, can also stake a claim to an Olympic berth in that event, because they were also NSR winners. Selection on the sweep women's side, however, might not be so simple: as two of the top women in Tom Terhaar's group, this pair has options, and a couple of seats in the eight might be too tempting to pass up (more on this slightly more complicated bit of selection wrangling below).

Belgrade will also be the Final Qualifier for the last two Paralympic events the USA is hoping to capture: the AS Women's Single and the TA Mixed Double. Both US crews--Dana Fink, in the ASW1x, and the TAMix of Oksane Masters and Robert Jones--are racing internationally for the first time, and earned their spots by defeating the boats that represented the USA in Bled last summer.

Also racing for the USA, but still a month out from final selection as a "big boat," will be a Women's Quad. Boated in this crew for Belgrade is the top US double, NSR winners Kate Bertko and Stesha Carle, along with Kady Glessner and Kara Kohler, who did not race the NSR. Waiting in the wings, and not racing this World Cup, the second place NSR finishers, Megan Kalmoe and Ellen Tomek, round out a pretty deep pool poised for selection in the Quad, a crew that took a strong silver at the Bled Worlds. While final selection might not be on the line for the Women's Quad here in Belgrade, the field is pretty stellar: with China, Great Britain, and Germany all using the regatta as a final dress for London, the A Final promises an interesting preview of the big race in London.

It is hard to say how the racing will go, of course, but here is a quick look at some notable entries that the 5 crews facing selection will be up against:

M1x
Jurkowski will be racing eight scullers who finished ahead of him at the Bled World Championships, most notably Ondrej Synek (CZE), Alan Campbell (GBR), Lassi Karonen (SWE), and Olaf Tufte (NOR)--A finalists all in Bled last year. Azerbaijan's Aleksandar Aleksandrov and Cuba's Angel Fournier Rodriguez, who finished ahead of Jurkowski in the B Final at Worlds will also be racing, along with Tim Maeyens of Belgium, who won the C Final and is still seeking a slot at the Games. To be fair, in that B Final last summer, Jurkowski only needed to finish 11th overall to win the USA a M1x bid for London, but it was a very hot petite and, either way, the bar here in Belgrade is set pretty high with a quality field that is only missing three of the top scullers in the world.

LW2x
The Light Women's Double, coming off a World Cup winning season in 2011 and their near-miss of the podium when they took fourth in Bled, could figure to contend for a medal even though their main concern is qualification. The Belgrade field should provide a glimpse of the Olympic Final, with only Canada's silver medal duo missing from the top four finishers in Bled. The defending World Champs from Greece will be racing, as will one half of GBR's bronze medal crew, Sophie Hosking, now teamed with Katherine Copeland. The British are coming with two doubles, in fact, while China and Denmark--both qualifiers from Bled--will also start the season in Belgrade. Apart from Greece and the new British lineups, these are crews that Hedstrom and Nichols have handled before, but the wild cards between them and the top four spot they want could be one of the five doubles here that are hoping to race their way into the Olympics at the Final Qualifier later this month, particularly the Dutch double of Rianne Sigmond and Maakie Head.

ASW1x
In the adaptive events, all the crews racing have yet to qualify, and with only two spots available in each event, racing will come down to the A Finals to decide who can make their country's Paralympic Team. In the AS Women's Single, Dana Fink will face eight other scullers, including Canada's Joan Reid, who took bronze in last week's racing at the Gavirate International Adaptive Regatta in Gavirate, Italy. Reid bested three pre-qualified scullers en route to the podium in Italy.

TAMix2x
The new USA combination of Masters & Jones will face six other crews in this event as they, too, look to finish in the top two. The only other nation in the field that raced in Bled is Belarus, whose Alena Aliaksandrovich has a new partner this year in Yauhen Birkas. Brazil's entry took a third and fourth at last weekend's Gavirate Regatta, against qualified crews, while the Dutch entry that will race here in Belgrade failed to make the A Final either day.

W2-
Given the USA's dominance in sweep rowing, the two pairs the US will enter here--Cafaro and Logan as USA1, and Caroline Lind and Taylor Ritzel as USA2--figure to be in contention throughout, but it is a field 16 deep. All the heavy hitters of international women's sweep rowing will be in the mix, too, save for the Canadians and defending W2- World Champs New Zealand. Romania will compete with two pairs, to include recently un-retired 5-time Olympic Champion Georgeta Andrunache, as will the Dutch, the Chinese, and the British. The GBR pair, Helen Glover and Heather Stanning won silver in Bled and, in the absence of the Kiwis, will certainly be looking to lead the field.

Like the M1x and LW2x, a top four finish means a spot on the Olympic team for the NSR winners in this event, Cafaro and Logan. Placing here would give them the option to accept a guaranteed spot in the pair and remove themselves from contention for the Women's Eight--or they could secure the pair spot and then look to race both events in London should they make the eight when that lineup is announced on June 22nd. Doubling from the pair to the eight has a pretty long tradition at the Olympics on the women's side, but the new Olympic format, which now has four days of finals instead of the two in previous Games, does create some significant logistical challenges for crews hoping to double up--it will be interesting to watch both the racing and the decisions made afterward by Cafaro and Logan.

One important Selection Procedure note here: only an NSR winner can qualify via the "top four finish" criteria, so even if the other USA pair, Lind and Ritzel, nabs a spot coveted top four placing with or ahead of USA1, they cannot become the USA's Olympic entry at this event.

The [Rest of the] Road Ahead
All of that only covers just 3 of the 14 Olympic events and 2 of the 4 Paralympic events, so here is a quick review of the next four stops on this road map, and the athletes who will be racing each event:

Lucerne Qualifier - May 20-23 last chance to qualify for these crews:

* - FISA announced an increased allocation in the W1x on May 18th; there are now 4 places available at the FQ.

Interview with Mahe Drysdale, NZL M1x
Get our Newsletter!
Enter your email address to receive our updates!