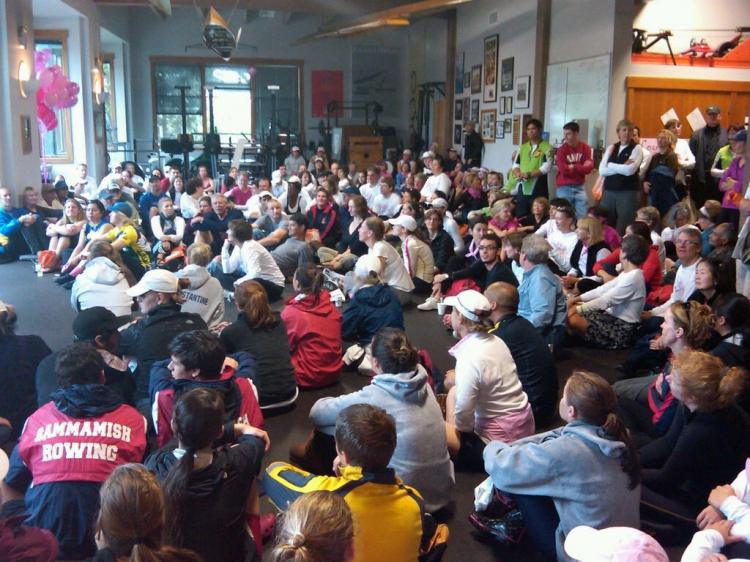 Six hundred, sixty rowers and paddlers from 22 rowing clubs throughout Washington and Alaska raised over $90,000 to fight breast cancer Sunday morning at Seattle's 11th annual Row for the Cure regatta on Lake Union. The regatta benefits the Puget Sound Affiliate of Susan G. Komen for the Cure and helps kick-off breast cancer awareness month in the Emerald City.

"One of our rowers just lost her sister (to breast cancer)," said Anchorage Rowing Association's Ed Hall, a former Washington State University rower that helped grow the sport in Alaska. "One out of eight women will be effected by breast cancer in her lifetime," said Hall whose club was among the top three fundraising teams at the regatta with $6,465. "You have to take a bad thing and create something positive. We wanted to compete in Seattle to let her know that her sister is important."

Since its inception in 2000, Seattle's Row for the Cure has raised over $500,000 placing it among the most successful of some 50 Seattle-area third-party "for the cure" events - benefits put on by groups other than Susan G. Komen for the Cure, that annually help the local affiliate.

"A half-million dollars in 11 years is incredible," said Cheryl Shaw, executive director of the Puget Sound Affiliate of Susan G. Komen for the Cure at the post race celebration at Seattle's Pocock Rowing Center. "It's really eye opening to see the people that are impacted by breast cancer. Every time I come out and see this kind of effort, it's hard not to try to work harder."

The public can still sponsor a rower or donate online by logging on to http://www.rowforthecure.com/cities/seattle.htm