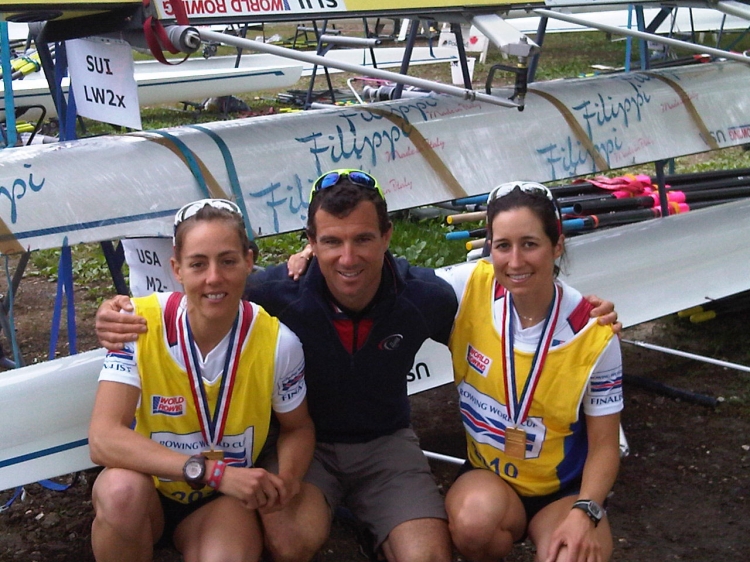 After dominating the field in the preliminary races, the lightweight women's double sculls duo of Abby Broughton (Tetonia, Idaho) and Ursula Grobler (Pretoria, South Africa) took an early lead in the final and held it the entire length of the course to win gold. Broughton, a silver-medalist in last year's world championship lightweight women's quadruple sculls crew, and Grobler, who won the lightweight single sculls at NSR #1, finished more than five seconds ahead of Great Britain's 2009 bronze medalists Hester Goodsell and Sophie Hosking with a time of 7:07.75. Goodsell and Hosking crossed second in a 7:13.11, followed by Greece's Triantafyllia Kalampoka and Christina Giazitzidou in third with a 7:17.09.

"We had a great race," said Grobler. "You always have to react to what's going on around you, but we stayed on top of it."

In the women's pair, defending world champions Erin Cafaro (Modesto, Calif.) and Susan Francia (Abington, Pa.) were edged out by China's Meng Li and Tong Li in a photo finish for the silver medal. Cafaro and Francia were in second place over the middle 1,000 meters, but couldn't match China's surge in the sprint. Canada's Krista Guloien and Ashley Brzozowicz, 2008 Olympians and members of last year's eight, led from wire-to-wire to win gold in a 7:20.60. The Li twins crossed the line at 49 stokes per minute to take silver in a 7:22.81, with the U.S. in a 7:22.86 for the bronze medal.

"It was the first race of the season and we need to build for the second part of the year," said Cafaro. "It was a very hard race. Now we're back to the States and will be back in Europe for Lucerne [Rowing World Cup III]."

The women's double sculls crew of Kate Bertko (Oakland, Calif.) and Stesha Carle (Long Beach, Calif.) finished in third place in the final for the bronze medal. Great Britain's Katherine Grainger, a three-time Olympic silver medalist and last year's second-place finisher in the single sculls in Poznan, and her doubles partner Anna Watkins, took a full boat-length lead by the 500-meter mark and continued to set the pace over the remainder of the course to win the gold medal in a 7:06.14. Bertko and Carle, both members of the women's quadruple sculls crew that took silver at the 2009 World Rowing Championships, went stroke-for-stroke with China's Liang Tian and Yangyang Zhang crossing over the 1,000-meter mark. China pulled ahead in the sprint, however, finishing just 1.1 seconds behind Great Britain for silver in a 7:07.20. Bertko and Carle clocked a 7:09.44 at the line, followed by Czech Republic's Antosova sisters in fourth place with a time of 7:11.91.

Charlie Cole (New Canaan, Conn.) and Jake Cornelius (Brooktondale, N.Y.) finished sixth in the final of the men's pair Sunday, posting a time of 6:55.41. Cole, who placed fifth in the event at the 2009 World Rowing Championships and Cornelius, a member of the men's eight that finished ninth, were in fifth place at the 500-meter mark before falling behind Germany's Kristof Wilke and Richard Schmidt crossing the halfway point. New Zealand, Great Britain and Greece went top three to replay last year's world championships final, with New Zealand's Eric Murray and Hamish Bond crossing first to win the gold medal in a 6:33.30. Great Britain's Peter Reed and Andrew Triggs Hodge crossed 1.2 seconds back for silver in a 6:34.52, followed by Nikolaos and Apostolos Gkountoulas of Greece in a 6:41.06.

After missing a spot in the final by just 0.31 seconds in the lightweight men's double sculls, the U.S. crew of Brian de Regt (Rowayton, Conn.) and Jon Winter (New Haven, Conn.) won the B final Sunday for a seventh-place finish overall. De Regt and Winter led from the start, crossing 3.8 seconds ahead of Austria's Joschka Hellmeier and Florian Berg at the line in a 6:30.85. Austria posted a 6:34.67, followed by a close finish for third between Slovenia (6:35.85) and Greece (6:35.97).

Warren Anderson (Paso Robles, Calif.) was scheduled to race in the B final of the men's single sculls, but did not compete due to an equipment issue prior to the start of the race.

Great Britain concluded the regatta with 75 points, having won a total of 16 medals including nine gold. For complete schedule and results, visit http://www.worldrowing.com/index.php?pageid=213. The Rowing World Cup series was launched in 1997 and includes all 14 Olympic boat classes. The overall Rowing World Cup winners are determined after a series of three regattas. Germany has dominated the series since its beginning ten years ago. This year, the next two stages of the series will be held in Munich, Germany (June 18-20) and in Lucerne, Switzerland (July 9-11).

(Photo thanks to Carlos Dinares)