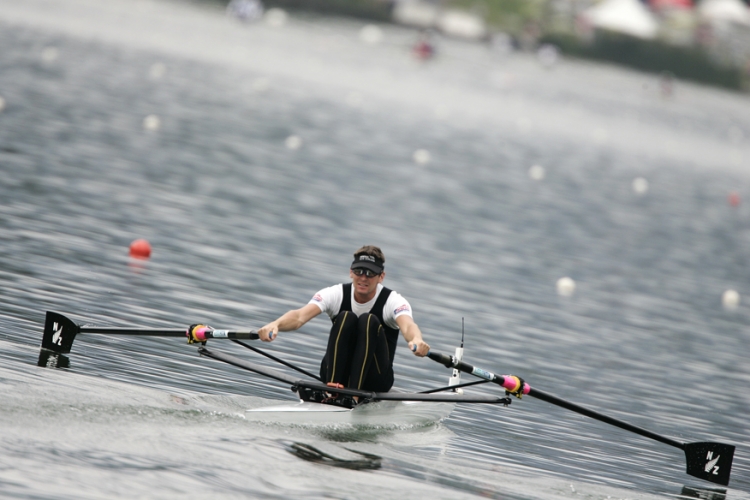 The 2009 World Rowing Championships blasted off in Poznan, Poland tonight and Day 1 provided a great start for the eight New Zealand crews making their first appearance of the championships.

2007 and 2008 World Champion Duncan Grant got the 2009 New Zealand campaign underway with an impressive heat win. Grant, going for an unprecedented third straight title led from the front as he is accustomed to doing this season and cruised to a time of 7 minutes and 5 seconds ahead of Chilean sculler Felipe Leal Atero and Iranian Mohsen Shadi Naghade. Grant's was the fastest heat of four and he progressed directly to the semi finals.

Emma Feathery and Rebecca Scown - the surprise package of the World Cups and undefeated in the pair so far this season - followed Grant's example and took the early initiative, building on a three second lead ahead of Romania by the 1,000 metre mark and eventually coming home comfortably after easing off in the last 100 metres. Romania and Argentina followed them home, but the Kiwi pair - one of the hot favourites for a medal - goes straight to the semi finals.

Men's pair Eric Murray and Hamish also dominated their heat, winning as they pleased after a customary blistering start that was too much for Canada, Poland and South Africa. They progress directly to the semi final also, but will have a keen eye on the rival British pair, who clocked virtually identical split times to them winning the first heat.

Anna Reymer and Paula Twining were in no man's land in their women's double scull heat, racing the majority of the course nicely ahead of Denmark but trailing crews from Poland and the Czech Republic. A decent third place though put the girls into the semis.

Matthew Trott and Nathan Cohen went immediately after the girls in the first heat of the men's double sculls and took a length lead into the second 500 metres. Nonetheless, the French double of Bahain and Berrest got themselves on level terms before halfway and took the lead, which they held onto until the end. Cohen and Trott tracked them all the way, perhaps mindful that an easy top two finish was enough to put them straight into the semi finals.

The men's straight four - the Under-23 world champion crew from Racice earlier in the season - was making its elite debut in Poznan in one of the acknowledged toughest boat classes. Even so, Tyson Williams, Hamish Burson, Simon Watson and Jade Uru put in a great debut row at the highest level.

Starting alongside Australia's top four, the quartet became embroiled in a three way battle for the lead with the Aussies and the Germans. Never more than a length or so away from the lead, they held a solid third throughout the second half of the race. This almost became second when they caught the Germans, but the Kiwis ran out of time and came home third just a couple of seconds behind the Aussies and a half second down on the Germans. They will now head to the repechage, but will fancy their chances of progressing with the top boats.

With opposition from China, Germany, Korea, Ukraine and Belgium, the first round of the women's single scull was never going to be a walkover for Emma Twigg. China's experienced Xiujun Zhang - whom Twigg rowed down at Lucerne recently - took command but couldn't shake off the Hawkes Bay sculler. The two were an impressive ten seconds or so up at halfway, slugging it out for pride and a slightly better starting lane in the semis with direct qualification now assured. Zhang took the win, but Emma looked comfortable enough following her and should have much more to come as the event progresses.

Last up on Day 1 was 2005, 2006 and 2007 champion Mahé Drysdale who after his third place hiccup in Beijing has been very much the man to beat in the heavy single scull this season. Drysdale has defeated everyone of note in the 2009 title race already this year and got his campaign off to a winning start with a comfortable heat victory. Winning this one was a formality and Drysdale heads to the semi finals along with a field that includes usual notables Olaf Tufte, an impressive Alan Campbell and Ondrej Synek.