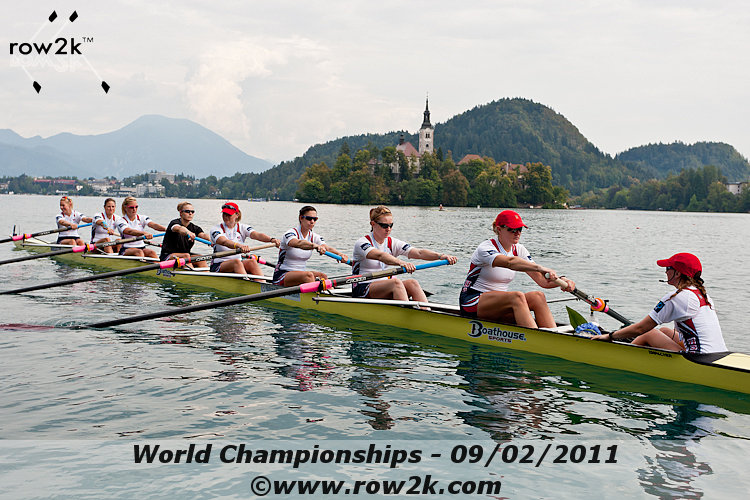 BLED, Slovenia - Coming through the first quarter of the 2,000-meter course, the red, white and blue blades of the United States women's eight were obscured by those of Canada, Romania, Great Britain and The Netherlands.

It was not a common sight for those used to watching that boat race.

The U.S. crew went to the line at the 2011 World Rowing Championships in Bled with five consecutive world titles, including the 2008 Olympic gold, and it was in fifth place with 1,500 meters to go. But then came the second 500, and the beginning of its assertion over the field.

With each stroke, the U.S. bow pushed further and further ahead. The crew was in second halfway through and in control as they jumped into the third 500. Canada did not give up the chase, but nothing they could do mattered.

"We just had a race plan and we executed it," said Lofgren, who was sitting in bow seat and had a good view of what was going on in front of her. "When (coxswain Mary Whipple) said go, we went. There are always other people there, but we have a lot of confidence in what we do. We practice a lot, we train a lot and we race a lot, so when it comes time to test it, it's an exciting opportunity. It doesn't make us nervous. We're ready to race."

When aren't they? Under head coach Tom Terhaar, the U.S. women's eight has not lost a race since finishing second at the Lucerne world cup in 2006. It won the next race, the 2006 World Rowing Championships, and hasn't looked back since.

And there's no looking back now.

With the gold medal in hand, the U.S. has secured the boat (but not the athletes) for the 2012 Olympic Games in London. Really, all that was needed was a top-five finish. But this is not a crew that settles for that.

And now the focus is on next year.

"Every time so far, it's been completely different," said Polk, who won her second world championship. "It's been explosive. It's been exciting. It was awesome to race a full 2,000 meters. We always do. No matter where the competition is, we push ourselves to the limit. That's what this year is about. It's getting ready for next year. London 2012."

"It was absolutely exhilarating, start to finish," added Redman. "I can't wait to see what we can do in the coming 11 months."

Neither can two-time Olympian Whipple. This is her 11th year on the national team and, like today, she has been thrown into the water more times than she can remember. It's a rowing tradition to dunk the coxswain after a big win, and Whipple has had some big wins.

"It was such an exciting race," Whipple said, after being pulled out of the crystal blue waters of Lake Bled. "It took all 2,000 meters to take that win. We all stuck together and believed in each other and we fought the whole way.

"I've got the best engines in the world. They are just drooling and frothing at the mouth to go, and they just listen and ask me, 'When can I go?' and it's exciting. They're the best," she said.

It was a good way to end a tough morning for the U.S. contingent overall at these championships. Before the women's eight, four crews rowing in Olympic events went to the line in the semifinals and failed to advance.

Four others rowed in the finals and did not medal. The ability to qualify the Olympic boats now falls to the B finals.

The championships serve as the first opportunity for nations to qualify crews for the 2012 Olympic Games, although specific athletes won't be selected until next spring.

On the men's side, the top 11 finishers in the single sculls, double sculls, quadruple sculls, pair, four, lightweight double sculls and lightweight four all qualify their boats for the Olympics, while the top seven men's eights gain automatic qualification.

In the adaptive divisions, the top eight crews qualify for the Paralympic Games in London.

The U.S. crew was with the pack off the line, but then fell of pace and into fifth place and remained there the length of the course. It finished in a time of 5:50.84. Croatia won the race with a time of 5:46.51.

The U.S. will now go to the B final Saturday and will have to place in the top five to qualify the boat for London.

"I think that we had one of our better starts; we were right in the pack and we gave it our all in the middle," said Miller. "It was a hard-fought race for sure. There was nothing blatantly in your face about it. It is just a real, real tight field. You can see that from the times - three seconds between third and fourth.

"We'll focus on tomorrow. We have a job to do," he said. "We've got to qualify this boat. We'll do a little cool down, a little ice bath and come back tomorrow ready to roll."

The quad was followed by the men's pair of Tom Peszek (Farmington Hills, Mich.) and Justin Stangel (Madison, Wis.). Racing France, Germany, Great Britain, Canada and Hungary in the first semifinal, the duo went to fourth place and stayed there, finishing in a time of 6:41.13. Great Britain won in a time of 6:31.66, followed in second by Canada in 6:35.97 and Germany in 6:36.92 for third.

Peszek and Stangel will race in the B final and need to finish in the top five to qualify the boat for the Olympics.

"Those guys are tough," Peszek said. "There's no question why those three are going to be in the final. They all deserve it. So we had a pretty good piece and we did what we wanted to do. It's time to get up for the (B) final. We have a big mission still on us and we're going to go get that."

In the first semifinal of the women's double sculls, Kate Bertko (Oakland, Calif.) and Sarah Trowbridge (Guilford, Conn.) took on Finland, Ukraine, Australia, Poland and Germany with hope of advancing to the final.

It was not to be. The U.S. was never really in contention and trailed in fifth place for half the race before moving up a spot to fourth. The crew finished in a time of 7:07.10 behind Germany, Poland, Ukraine and Australia, which won in a time of 6:57.27.

The U.S. will race in the B final tomorrow and need to finish top two to qualify the boat for London.

With the morning semifinals over, Friday's race program moved to finals. The U.S. had five chances to medal and missed four.

One of the U.S. hopes for a medal was Ursula Grobler (Pretoria, South Africa), who raced in the final of the lightweight women's single sculls against Canada, Brazil, Great Britain, Switzerland and Germany.

In her heat on Thursday, Grobler beat Brazil's Fabiana Beltrame and was poised to medal, if not win. But today, Beltrame jumped into first and led the whole way, finishing in 7:44.58. Grobler was in second until the final 1,000 meters, when she fell behind and finished fourth in 7:53.72.

Andrew Campbell (New Canaan, Conn.) was next in the final of the lightweight men's single sculls. Campbell, who had medaled in the single at both the junior and under 23 levels, was in good position to medal again here in Bled.

He raced France, Denmark, New Zealand, Italy and Great Britain. Campbell held medal position until the last strokes of the race when New Zealand's Duncan Grant pushed him off the podium. Campbell finished fourth in a 7:06.64. Denmark's Henrik Stephansen won gold in a time of 6:54.73.

In the final race for the U.S. Friday, the lightweight men's four of Ryan Fox (Edgerton, Wis.), Will Daly (Vail, Colo.), Robin Prendes (Miami, Fla.) and Anthony Fahden (Lafayette, Calif.) raced for places 13-18 against Argentina, Mexico, Canada, China and Spain. The U.S. won the race in a time of 6:15.21.

July 9 in row2k History
Get our Newsletter!
Enter your email address to receive our updates!