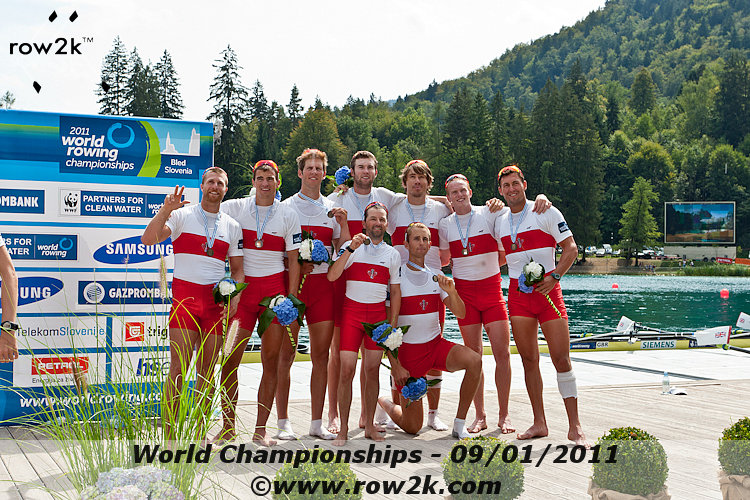 The Canadian men's eight stepped onto the podium today at the World Rowing Championships (Aug. 28 to Sept. 04) in Bled, Slovenia, picking up a bronze medal and confirming the boat?s status as a serious contender for next year's Olympic Games.

"I can definitely say this is a step in the right direction," said coxswain Brian Price, 2008 Olympic gold medalist who returned to the boat this year after taking some time away from competing after Beijing. "And that's how we see it, as a step. We're going in as defending Olympic champions and that's the reason why people go to the Olympics, to win the gold medal. So we improved quite a bit from Lucerne, and we've improved at this regatta. Now it's a matter of going forward and doing more work going into 2012, so we can make up that ground."

This year's lineup is coxswain Price (Belleville, ON), Will Crothers (Kingston, ON), Rob Gibson (Kingston, ON), Andrew Byrnes (Toronto, ON), Malcolm Howard (Victoria, BC), Conlin McCabe (Brockville, ON), Jeremiah Brown (Cobourg, ON), Doug Csima (Oakville, ON), and Gabe Bergen (100 Mile House, BC).

"We executed a real solid race today to get back on the podium. The race was a real barn burner for the entire 2000 metres," said Gibson, who was an alternate for the men?s program in 2008. "We now have 330 days until the London Olympics and are looking forward to training harder this winter to take a run at the World Champion German crew next summer."

During the race, there was a slight cross-tail wind creating some choppy water, particularly in the final 800 metres of the course.

"We are happy with our race today, the conditions (on the course) were chaotic, but we persevered. We owe a huge thanks to our coach Mike Spracklen and all the staff here for all the support we've received," said 2008 Olympic gold medalist Malcolm Howard, who also returned to the eight this year after rowing as a single sculler in the last Worlds.

The men's eight final is typically the last race of the World Championship regatta, but this year FISA, the international rowing federation, went with a new schedule in preparation for next year's Olympics.

In other Canadian races today, the women's pair B final was a heartbreaking nail-biter for those in the grandstands at scenic Lake Bled. With the top eight overall qualifying for the Olympics, Canada had to finish in the top two in today's B final. In a dramatic sprint to the line, Italy won in 7:22.67, the U.S. locked up the final qualification spot 07:23.36 in a photo-finish with Canada (07:23.42). This crew is Carolyn Ganes of Saskatoon, SK and Larissa Lagzdins of Burlington, ON., who finish ninth overall.

The Canadian men's double was fifth in semifinal in 06:46.15. Germany, Great Britain and Australia qualified for the final from this semi. This double - Fraser Berkhout of St. Catharines, ON, and Mike Wilkinson of North Vancouver, BC, - now rows in the B final and still has a chance at Olympic qualification if the boat finishes in the top 11 overall.

Cameron, who is recovering from a rib injury, is a World Champion in the Olympic boat class, the lightweight women's double, with Lindsay Jennerich. However, Jennerich is rowing here with Patricia Obee in the Olympic event.

"The fact that I am able to race here has been a bonus, considering that I just got back in the boat two weeks ago," said Cameron, who is also an Olympic bronze (2008) medalist. "Making the A final, and still being in the hunt for a medal, is the icing on the cake."

The lightweight men's pair won its B final this morning, to finish seventh overall in the world rankings. Morgan Jarvis (Winnipeg, MB) and Tim Myers (Penticton, BC) had a time of 6:47.31. This event is not part of the Olympic program.

Ted A. Nash, A True Giant of Rowing, Has Passed
Get our Newsletter!
SUBSCRIBE
Support row2k!
If you rely on row2k, please support row2k!
Advertiser Index
Advertise on row2k