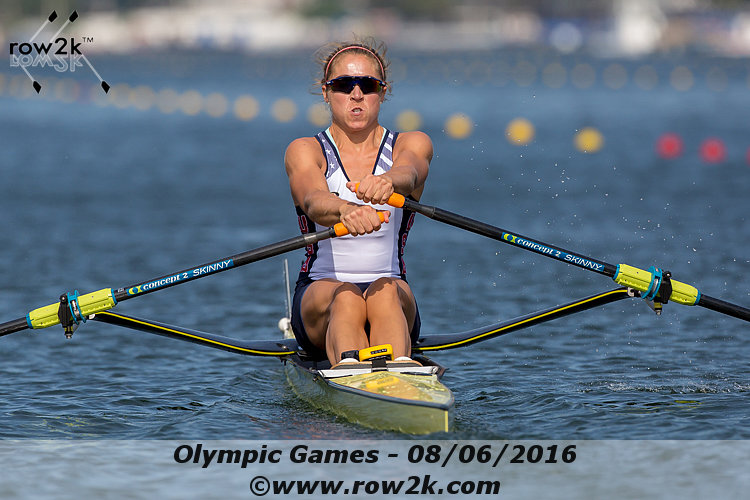 Gevvie Stone has spent a significant amount of her training time in Boston rowing in some pretty difficult conditions at the top of the Charles River in the widest section known as the basin.

Wind often whips the water into heavy chop, making sculling and keeping water out of a narrow single shell next to impossible.

But nothing could have prepared Stone (Newton, Mass.) for the conditions she encountered on the Lagoa Rodrigo de Freitas Olympic racecourse at the 2016 Olympic Games. Unexpected winds that were not in the forecast on Friday evening turned the racecourse into a rowing nightmare for the opening day of heats at the eight-day regatta.

Stone handled the conditions well enough to finish first in her heat and hold off Fie Udby Erichsen of Denmark to win her heat in 8:29.67 and advance to the Tuesday's quarterfinals.

But when she crossed the finish line, Stone's wrists were so tight she resorted to a trick her mother taught her when she was just learning to scull and she gripped her oars too tight.

"My mother taught me to draw every letter of the alphabet with my hands to loosen my forearms and wrists," she said. "It worked. My forearms were so tight at the end of that race, I had to have them worked on."

Gripping the oars too tight is something Stone has not had to do in a long time. But Saturday, it was a matter of survival. If she hadn't, there was a good chance she would have lost control completely.

The wind was so bad that she looked like she was rowing on the ocean. At one point during the race, it seemed she would flip. One hand was up, one was down and water was cascading over her bow, her back and into her boat.

"I thought I was flipping at one point, twice, actually," she said. "My port oar was parallel to the boat, and I was (thinking), 'I am going in,' and I managed to rescue it. The first 500 was fine. The second 500 was windy, but rowable.

"The third 500 was just…There were these swells that would just crank the boat around 45 degrees, and there was nothing I could do to stop it. It would stop me, and I would try to get straight in the lane. There was one point I thought I was going into lane negative one."

Stone was one of five U.S. crews to begin their quest for an Olympic medal in the 2016 Games. Two advanced including Stone and the lightweight men's four, which finished second in its heat and advanced to Tuesday's semifinals.

The three remaining crews - the men's pair, women's double sculls and women's quadruple sculls - will have to race in the repechages for a chance to advance.

He had good news and bad news.

The good news, depending on how the rowers view it, is that the race schedule will go on as planned. The bad news is the wind situation is going to get worse.

"It was very difficult (today) and the background is the weather report we got last evening did not at all indicate weather like this," Smith said. "It indicated a nice day. The weather report we saw at 6:30 (Saturday morning) was totally different than last night's weather report. It showed winds seven meters per second with gusts of nine.

"Looking forward, the weather for the coming days is, it's going to get even worse. Tomorrow is similar to today, but stronger. Monday is even stronger. Tuesday is as strong as Monday. Wednesday is less strong, but rain. Given the weather forecast, we had decided to keep going."

Smith said that FISA would continue to monitor the conditions and that a decision to eliminate rounds of racing and advance crews based on results of pervious races, or to postpone a complete day and use the adverse weather day built into the schedule, which would have the regatta ending Sunday instead of Saturday, would be discussed.

It was not good news.

The wind and weather conditions were so incredibly hard to handle that the Serbian men's pair flipped during their race. Rather than enforce the long-time rule that a boat which doesn't cross the line cannot advance, FISA decided to rescue them from the water and allow them to race in the next round rather than waiting for the crew to get back into its boat to finish the race.

That could have eased some of the concerns on the venue as the day's racing moved on, but it was no relief for the condition of the water and the effect those conditions had on racing. What happens in the coming days will be decided as the weather moves on.

For today, the results stand. Not even the last-minute changes to the boats - the addition of extra splash shields taped on, duck tape and plastic wrap to keep some of the water out of the boats - could do anything to help.

After Stone, the men's pair of Nareg Guregian (North Hills, Calif.) and Anders Weiss (Barrington, R.I.) were in qualifying position until the last 500 meters when they suffered a few missed strokes and fell into fourth, finishing in 6:49.97. Australia won in 6:40.79. South Africa was second in 6:41.42, and the Czech Republic advanced in a 6:42.71.

The U.S. will need to row in the repechage Saturday against Spain, Serbia and The Netherlands to advance.

"It was pretty rough conditions," Guregian said. "After the first 300 in, the side chop hit us pretty hard. But, every other boat had to deal with it as well. I thought we did a decent job for most of it but in the last 500, we lost it."

"We're just going to have to try to keep our composure if the rep is like it was today," Weiss added. "I think we had, at one point, a solid lead on the Czechs and then we just hit wave after wave after wave, and we sort of lost it.

"We didn't compose ourselves after catching those diggers and those crabs the way we should have to keep pushing out. I think the mindset for tomorrow will be to go out hard and if it is as bad as it was today, still is today, then just keep our composure and row through the crabs and the diggers because as Nareg said, every boat is dealing with that."

Ellen Tomek (Flushing, Mich.) and Meghan O'Leary (Baton Rouge, La.) had the same story. They were in second and in qualifying position until they hit the wind and endured bad stroke after bad stroke and went out of their lane twice.

"We had a great first 500," said O'Leary. "Had a really solid start. We were right there with Poland. As you could tell, the water was pretty ferocious and we caught a couple of bad diggers that just stopped our boat."

"And once you get stopped in that water out there, it's really hard to gain traction and pick the boat back up. It was an unfortunate happening of events. The worst that could have happened, happened, in terms of fighting water like that. We're not going to let it pull us down, obviously. It was pretty crazy water, probably the worst I've seen, but you just gotta fight through it and hopefully tomorrow, we can put a better full race together."

"We just wanted to go out there and have the best race that we could and throw down a really good time, and unfortunately, that's just not going to happen when you catch several over-the-head crabs and your boat goes into the other lane and stops," Tomek said. "One thing that we can rely on is that we were not able to go to the well. That was not everything we had physiologically, so that is a positive."

Rowing later in the afternoon - and in what appeared to be slightly better conditions, only slightly - the lightweight men's four of Tyler Nase (Phoenixville, Pa.), Edward (Mix) King (Ironton, Mo.), Robin Prendes (Miami, Fla.) and Anthony Fahden (Lafayette, Calif.) took advantage of the almost clean conditions of the first 500 meters on the course and built enough of a lead over The Netherlands and Canada to finish second in 6:05.61 and advance to the semifinal on Tuesday.

"We had a pretty nice start," King said. "The conditions up there were a little bit nicer, just in the opening 200 (meters). Through the middle of the race, we just kind of settled into a rhythm, just holding the field, because the conditions became pretty bad, pretty choppy. We just wanted to maintain our standing in the field."

"It was very internal," said Fahden. "I can't speak for the other guys, but when the conditions are that crazy, you're just trying to avoid mistakes. That's how you are going to do well or not do well - how many bad strokes you take when there is water coming over the gunnels and just a lot of chaos to your left, right, front and back. I was just thinking about feeling the rhythm the best I could and taking long, powerful strokes.

"We haven't raced that much this summer, so not really sure if good conditions or bad conditions favor us, but either way, I think we are just going to stay internally focused and just try to put a good piece together."

They launched their boat with an extra splashguard and plastic wrap down both sides, but did not advance. Only one of the three crews in the race - Germany - advanced directly into the final in 6:30.86. Poland was second in 6:33.43. The U.S. was third in 6:40.73.

They race in the repechage of the event on Monday against Australia, The Netherlands, China and Poland.

"Oh man, that was quite an interesting challenge today," Kalmoe said. "I think coming into it, everyone wants to have perfectly flat, amazing conditions, so that you don't have any surprises. But we do train to have the ability to handle challenging conditions like this. One of our home lakes, Mercer Lake, is notorious for having very challenging conditions from time to time, so we've done plenty of miles in choppy water. Today, we went into it with that in our pocket and the other two crews that were out there handled it better than we did.

"For me, I don't know that I've ever gone to a major regatta in the quad without going through the repechage. It's something that we don't prefer, but we do see it as just another opportunity to work on our race and develop skills and gel together as a crew."