row2k news
Getting Down to Business in Rio
August 4, 2016
USRowing
Photo: row2k.com 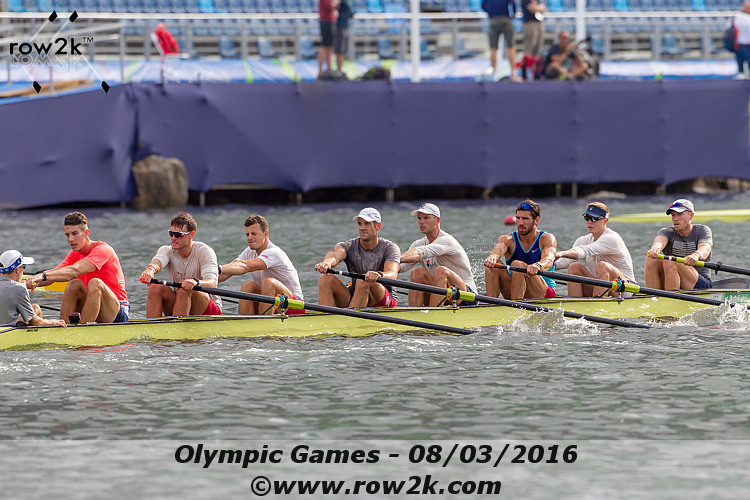 Early on the morning of the official opening day of the Lagoa Rodrigo de Freitas Olympic racecourse, a light fog shrouded the water and obscured the statue of Christ the Redeemer standing guard with open arms over the hundreds of rowers who traveled the globe to be here.

After months of speculation that Rio would not be ready, construction would not be complete or the water on the course would be unfit to row on, all appears fine. The few glitches that existed have been fixed and in three days, racing will begin.

"It's exciting to be here," said U.S. women's single sculler Gevvie Stone (Newton, Mass.). "Everything has been above people's expectations in terms of how clean the water is, how beautiful it is. The wind is unpredictable, but we're all learning how to deal with that and be flexible because it changes between the start line and the finish line. But, it is an outdoor sport."

This is Stone's second Olympics - she finished seventh in London in 2012 - and some of the unexpected that comes with an event this huge, and this public, she has experienced before. So for her, it's fun to watch the first time athletes as they go through it all.

"It can be overwhelming at first, taking in everything new and being a part of it and trying to soak it all in," she said. "Whether it's standing in line to get a passport stamped, or getting a credential, or being on the plane with a bunch of other Americans and being a part of Team USA with all the other teams - the volleyball players, the rugby players - it can be a big surprise. It's great being here with all the first timers.

"You can see how overwhelmed they can get with how much gear we got, and it is a lot, how much media there is. Having been through it once, it loses the element of surprise. But, it's still incredible."

For Stone and the rest of the U.S. athletes, the business of busing between the athlete village to the course, training and preparing for competition is all becoming routine. They have been here a week now.

It can be difficult for a city to adjust to the construction and the buildup and the traffic. The rowing venue runs through the middle of one of the busier sections of the city and "traffic snarls" is sometimes an understatement.

But the course is ready. The officials are in place and referees are on the water keeping the athletes safe. The security is plentiful and visible, with both local police and Brazilian soldiers inside and outside the venue in force.

For the backdrop, the venue is lined with mountains in several directions, beaches in another. And through it all, even the traffic, the citizens of Rio appear to be going about their daily routines.

And to help ease the congestion - at least for this week - tomorrow and Friday are holidays in Rio.

"There was already a holiday for Friday because of the opening of the Games, but they decided to have another one for (Thursday)," said truck driver Cesar Weisberg. "People who are not involved in the Games are noticing and are complaining a little because the traffic is getting heavier. But, I think they are going to get accustomed to it because they are going to enjoy the movement and the Games as well.

"And after it is over, the population is going to get a lot of improvements because of the new construction of a lot of different things, for example the subway. They are going to be able to use it after the Games."

Back in the venue, the work was all about rowing for the U.S. team. And they were happy to be at it after preparing and dreaming about it for so long. There may have been some things to get used to, the rooms at the athlete village had a few fixes to be made, but they are all done and everyone is settling in.

"Every event has it's challenges, and this one is no different," said Curtis Jordan, USRowing Director of High Performance. "But, we were expecting those challenges, and we adapted to those challenges. Now having been here almost a week, our athletes have found a grove, they're comfortable and all the things that they need to do their best, they've found and they are going about their business."

"Things have been great here," said Ed "Mix" King (Ironton, Mo.), who is competing in the lightweight men's four. "Everyone is so friendly, and it's such a unique experience and one I am extremely grateful to be a part of.

"It's so different from the world championships and other competitions I've been a part of in the past just because of the sheer number of athletes and different sports. It's incredible, and I'm just trying to soak it all in and at the same time stay focused in our training. I'm looking forward to our competition."