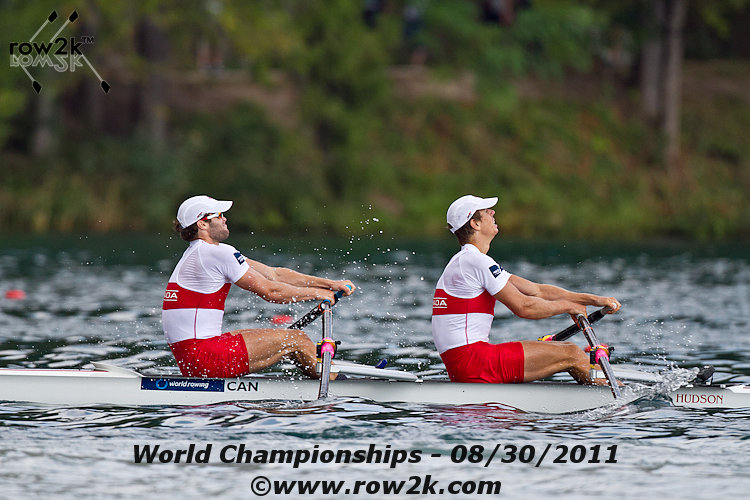 Canada had three crews racing in repechages today at the World Rowing Championships in Bled, Slovenia (Aug. 28 to Sept. 04).

This morning the men's double qualified for the semifinal - France was first in this rep in 6:14.16 and Canada clocked in at 6:17.53 (over 2000m) for second place. Top two from the reps in this event moved to the semifinals.

"The double went out with a plan that they executed very well," said coach Allison Dobb. "They have taken a confident step towards the semifinal on Thursday."

The double is Fraser Berkhout of St. Catharines, ON, and Mike Wilkinson of North Vancouver, BC. "Everyone was in a race for their lives in today," said Berkhout. "We pulled through with a solid race and are looking forward to the semifinal."

In a heartbreaker of a repechage race for the Canadian lightweight men's four, South Africa was first in 05:56.08, Serbia second in 05:57.39, and Canada third in 05:57.75. Only the top two boats advanced from each rep to the semifinals. This also means that Canada will not qualify this boat for the Olympics at this regatta, and will now row in tomorrow's semi C/D.

This lightweight men's four crew is John Sasi (North Delta, BC), Mike Lewis (Victoria, BC), Rares Crisan (Mississauga, ON) and Matt Jensen (Innerkip, ON). Only Lewis was part of the Canadian light four that rowed to a bronze medal at the Beijing Olympics in this highly competitive event.

The women's double also missed out on qualifying for the semi and a chance at an Olympic berth today.

Coming off strong at the start, the double - Kerry (Maher) Shaffer (Welland, ON) and Emily Cameron (Summerside, PEI) - could only hold on for a third-place finish this afternoon. The double's time was 07:04.75. The Czech Republic and Finland managed to come first and second respectively to move forward. The Canadians will row in the C/D semi tomorrow.

"The double's approach and attitude for today's race was world class," said coach Jeff Powell, "but the standard of the rowing here is high, and that's what we have to work on moving forward."

Canadian crews in action tomorrow include the men's coxed pair and men's four in reps; the men's lightweight double in a quarterfinal; the lightweight men's pair and women's pair in semis, and the men's eight also in a semi final. Canadian coxswain Brian Price, an Olympic gold medalist, will go down the course twice - in the pair and eight on Wednesday.

The Year of the Single Continues: Lifting Your Body At The Catch and How to Avoid It
Get our Newsletter!
Enter your email address to receive our updates!