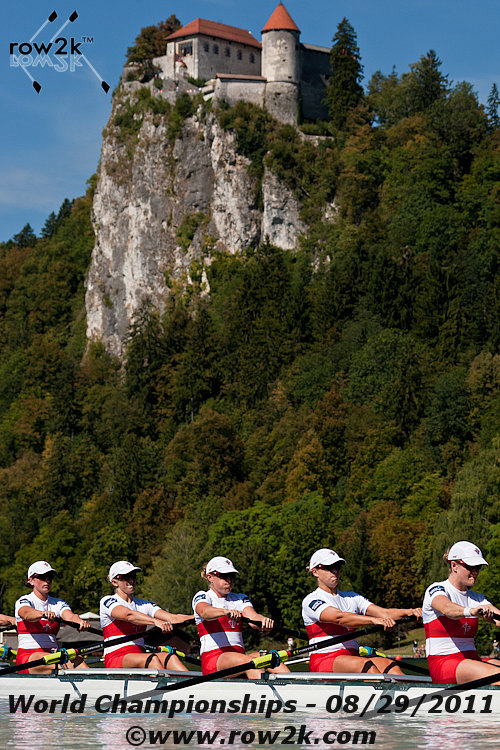 A beautiful day greeted the world's top rowers today in Slovenia, and Canada saw three more crews move closer to Olympic qualification, while its adaptive crew showed it's still in form to qualify for the Paralympic Games next year.

"This is the second most important regatta for us, next to the Olympics," said Peter Cookson, Rowing Canada Aviron High Performance Director. "It's crucial for us to qualify here as that sets the tone of the work we do over the next year."

The Canadian women's eight - a boat on the comeback trail after finishing fourth at the last Olympics - looked very solid this morning as it won its heat in 6:07.20 to qualify directly for the A final. Romania, Netherlands and China followed in this heat, while the World and Olympic champs, the U.S., won the other heat to also qualify for the final.

"It feels great. It's a confidence boost and a check in the box that we got the job done today. It's just one more step in the right direction for next year," said Darcy Marquardt, a two-time Olympian, determined to fight for a podium position in London.

In the only Olympic event for lightweight women, Lindsay Jennerich and Patricia Obee, both of Victoria, B.C., took the lead off the start in their heat today and were nearly a boat length ahead at the 500-metre mark. However, then the double from Belgium made a move through the middle of the race only to see Canada keep the pressure on, and sprint to the finish to win the race. The lightweight double won the heat in 7:04.16 (only the top finisher advanced to the semis).

"It would have been nice to not have been rowed through in the third five (third 500 metres of 2000), but we were," said Jennerich, the veteran in this boat. "I think there was confidence in both of us that if we kept that row through to a minimum, like we did, we?d be okay. It wasn't going to be an issue, if we picked the right time, we'd be able to to go back through them. That's exactly what we did. Obee and I together have exceptional sprint speed, and that sometimes causes us to be a bit lazy in the middle."

Obee, only 19 years old, replaces World Champion and Olympic bronze medalist Tracy Cameron who is competing here in the lightweight single, while still recovering from a rib injury. Canada did not want to risk Cameron's health or the qualification berth in an Olympic event, so Obee was called to fill in.

"I'm pretty confident racing with Lindsay because I know she's going to make the right call at the right time, so I just basically do what she says and I know it's going to work," said Obee after today?s heat.

Later in a rep, the women's pair (Carolyn Ganes of Saskatoon, SK and Larissa Lagzdins of Burlington, ON) was second and now move ahead to the semifinal round. Belarus won in 7:19.01, Canada was second in 7:20.04 and France took the third qualifying spot from this rep.

The men's coxed pair - coxswain Brian Price, Kevin Light (Sidney, BC) and Steven Van Knotsenburg (Beamsville, ON) - was third in its heat today in 07:11.91 and will row in a rep to qualify for the next round of racing.

The morning began with heats in rowing's adaptive or Paralymic categories.

On a day that marks one year out to the Paralympic Games in London, England, the adaptive four, defending World Champions, were on track with their campaign to qualify for the Games by winning today's heat in 03:28.00 (over 1000 metres).

"Today's heat was a good start for the crew," said Rowing Canada Aviron's national adaptive coach, Jeff Dunbrack. "We will now review our race and work on some parts that we can improve on for the semifinal. We know the competition is strong this year and we are not taking any anything for granted at this regatta."

Training Part 1 - Aspects of a Successful Training Program
Get our Newsletter!
Enter your email address to receive our updates!